This post pulls together information on three disparate but pertinent topics. They relate to recent work and will be discussed further as we proceed.

The first two were seen while browsing Facebook which is where we have our expanded index of activity.

This next article was seen on Quora. In it, the author looks at AI now and into the future. We have mentioned that thrust as being of importance to our work, as well.

As mentioned before, Weymouth is up for notice in 2022. Then, Essex County and Gloucester follow in 2023.

Posted by AJSwtlk at 1:04 PM No comments:

Today's browse brought up a familiar name which got us looking closer at the subject of Harvard in Massachusetts, in New England, in the U.S. and in the world. Earlier, we had posts that looked at James Bryant Conant (1893-1978, #23 1933-1953) and, then, John Thornton Kirkland (1770-1840, #14 1810-1828) due to topical reasons. Notice the numbers on the 2nd timeframe for each. It is their order in serving as Head of Harvard. Too, though, notice the time span with respect to their deaths which was over a century. We just looked at that. 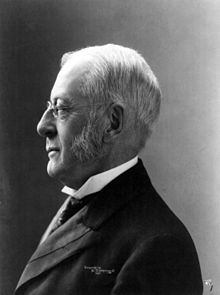 TL;DR -- After much consideration, we expect to use WikiTree going forward for several reasons. For one, what we have seen so far is excellent research and genealogically sound methods. Too, it's more than menu driven. In this sense, the world has bifurcated into two types (nuances, of course): GUI-framed and textual-logical. This applies to content as well as to programming.

This post seems a little repetitious but isn't really. After a bit more work, we will get more of a focus on WikiTree until something better comes along. Based upon what we have looked at, that might take awhile. So, we need to move forward. Along with the attempt at a database, we will recognize the work done so far at collecting information. Example: Empty branches on the family tree (category/Gardner). Put in a comment today (October 7, 2021 at 11:19 am) pointing to Thomas & Margaret as well as to a Coleman query.

We first saw WikiTree in the 2014 timeframe as we were looking for places to put information about Margaret Fryer that was recently discovered. We didn't hang around long, except we put, in the main menu, a link to the Thomas Gardner profile on WikiTree. Later, we got back to the site and have been helping with the edits of Thomas' Profile as well as that of Margaret Friar.

About WikiTree, they have one Profile per person which everyone edits, similar as one does with Wikipedia. If a duplicate gets made, easily done by error, then Profiles are merged with nothing being lost due to the methods. That is, WikiTree tracks changes through time very well (what change, when, by whom and reason). Today, we saw their blog for the first time. And, one topic was the Connections function (17 Dec 2019), hence this post.

This image is from a post that asks: Have a Connection, do you? The Force is strong in this post. There are some example queries that show relationships between actors. 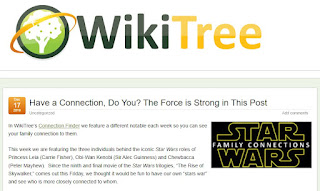 In terms of using WikiTree, we used the occasion of getting Dr. Frank's hand written notes about his mother's pedigree to link him to existing trees on WikiTree and to get familiar with the ways and means of the site.

In a sense, we actually used WikiTree almost like Wikipedia. That is, the first stop on a journey on some new person or subject. The trouble can be that WikiTree is more tightly controlled so that one doesn't find the conjucture-fluent world such as that of ancestry. As one researcher noted, these things are hints and, perhaps, some old map to be updated.

To other views, these are examples of group work where contribution is noted, managed, and rewarded where we get something of use. Guess what? A recent The Economist (Brit-humoured attempt at looking at the world's economy every week - they call it a paper - the only place where the contributors are not named) bemoaned the situation of the web (Silly Valley's disinformation bucket - okay?) and noted that one shining start was Wikipedia. Yes, indeed. Saw that back at its start. And, remember in the 2008 timeframe discussing this; academics were dissing the instrument; many pages now are done by the experts in the area, including academics.

We'll start a WikiTree category when we clean up those references. However, they did offer this Connections function (app). Here are a couple of examples: Dr. Frank and Henry VIII, Julia Ward Howe. The latter was motivated by an article in Wall Street Journal about an American hymn. As such, we showed some relationships between people somewhat following the Famous Kin mode.

Note, though, that the links are not only of direct relationships which is nice, actually. As collateral families and their associations are part of the social fabric that the people we are studying live in. So, that is important. See the Dudley post for a discussion. This family started early to study these relationships. One motivation would have been to sort things out. As in one line, there were two instances where a Dudley descendants married into an existing family. So, we have both the part-sibling and the step-sibling occurrence.

As an aside, seeing that got us thinking of the Mayflower Pure post which was misunderstood. In the line just referenced, there were two instances where one missed the Dudley link. Not that there were not others. So, those were Dudley pure instances. We really need to discuss this type of thing. Again, Mayflower Pure was to represent a line that came through 400 years of close association with MF families and no taint of that blood entering the line. And, we mean, lots of generations in the same locale. Miraculous is the word. Now, let's look at the characteristics involved more closely. That is, it's on the stack of research subjects.

TL;DR -- Over the decade of research, we have run into Harvard lots of times. And so, we need to collect those things seen and written about in a sequence that depicts several things. One of these would be the influence of the times upon Harvard and vice versa. The 1600s got us bogged down. We will be at this for a while updating this post and creating others.

This is one of our quests related to the upcoming 400th. We have some time but need to get to work early since there is a lot to do. Harvard has several histories. This one is from the view of the families here for 400 years with members related to Harvard several ways which will be further categorized as we find material. Anyone interested in helping, please contact us.

We will start with this brief list in a temporal order. It follows, somewhat, the order in this Quora article titled: What is the coolest obscure historical fact you know? We chose the topic of Harvard having a parallel history with the U.S.

Note: We will be editing this post continuously. As topics become too big, we'll split out other posts. The motive is to cover the whole of the history from the time of Nathaniel (kin) until the present time with a focus on people other than Harvard staff and students, most of which will be American.
Which this guys was firstly. That is, he was here before he went back over there.
This guy funded the secular revolution at Harvard. How did they go adrift? Of course, one has to also ask, did they? Lots to discuss.
Remarks: Modified: 10/10/2021