TL;DR -- After Lewis & Clark, lots of people went west. Some of these are New England folks of whom some are related to the Gardner families. Some came from the South. For all, we can compare the western experiences with those of people of the right coast.

We have several posts about cousins, such as Two cousins. We also have been looking at generations where we note that the 4th and 5th bore the brunt of the revolution. Then, we had the later generations down to now. Also, we looked at the early travelers to the west.

With the recent election, the population size of each state comes up since the number of electoral votes is proportion to the number of people. So, we have from the top, CA, TX, NY and FL. Where CA is almost twice the size of NY. And, discussions go around to CA's problems. Water is a huge one.

Due to the pressures from one city (LA), CA started to drain the interior dry in the early 1900s. We can start by reading about the life of William Mulholland (1855-1935). But, before long, we see that we have not really covered the history, yet, especially as it pertains to New England's long reach.

Stepping back a bit, not only did we look at the early arrivals by land, we looked at their influences across the middle of the country, say Lawrence KS, Gardner CO, etc. Along with Jedediah, there were several explorers, such as Joseph R Walker (1798-1876) who was with a party that described Owens Valley. This location is where Mulholland, later, went to get his water. Now, it's estimated that a 1/3 of LA's water comes from this location. Ought we talk about the fires?

Well, not, as we are looking at  American generations, for one. Joseph was born in TN; his family moved to MO, early. We have that area as a common theme, say Daniel Boone. Later, it was a location where the North/South conflict played out in a western area. But, Joseph went even further west. As did many others, from the early trickle to a later flood. Let's look at one.

Remember Grizzly Adams (1812-1860) and his bear, Ben? Their story told on a TV show? Turns out that he's of the 7th generation which had the experience of the Gold Rush (49ers), the Civil War and more. Grizzly has a long New England pedigree and is cousin of John Quincy Adams (1767-1848) who was of the 6th (both from Henry Adams and from John Alden). 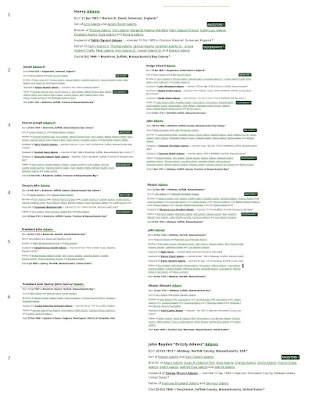