We're working on an article about Benjamin Brown Gardner who was the grandfather of Dr. Frank A. and who was married to Lucy Foster Wilson (see image of tombstone, below). While doing the research, we have started to fill an ahnentafel (see draft).

One name that came up was Nathaniel Eaton (#84) whose story has been told many times and ways; these stories, too, lead to even many more interpretations. So, we will have to weigh in, from the position of descendants.

For now, here is a little preview.
As with many persons who are not around to argue their position, a lot has been said and written without retort or clarification. Per usual, we are gathering all that we can find. However, even in the discovery state, the discussion can proceed.

01/21/2015 - All sorts of juxtapositions existed then which can tell us about now (nothing new under the sun?). Nathaniel's life seems a crux of several of these. His accomplishments at the University of Padua denote talent that is beyond the norm. Was his experience "the first witch hunt" as some claim? "Just what are the real tales" and "how we ought to view them?" are still open issues. ... As said, we are gathering all references to Nathaniel that we can find, in order to tell the definitive story (as much as we can, so long after the fact). ... The WSJ, last year, reviewed 'Ebony & Ivy' in which we see that Nathaniel owned a slave who served Harvard students. Too, though, note one student, later, talking of trading slaves from his dorm room. Also, an abolitionist thrown out due to his view in the 1830s? 'Bondage' is the theme, in one sense, as in, are we not all bond servants of something (note: are birds free from the chains of the skyway? - or such, thanks BD). ... One fact? The 400th will be much more interesting than the anniversary a century ago. Have you noticed all of the Magna Charta (800th, this year) mentions coming out of the woodwork? ... Speaking of which: Harvard and Slavery (event). 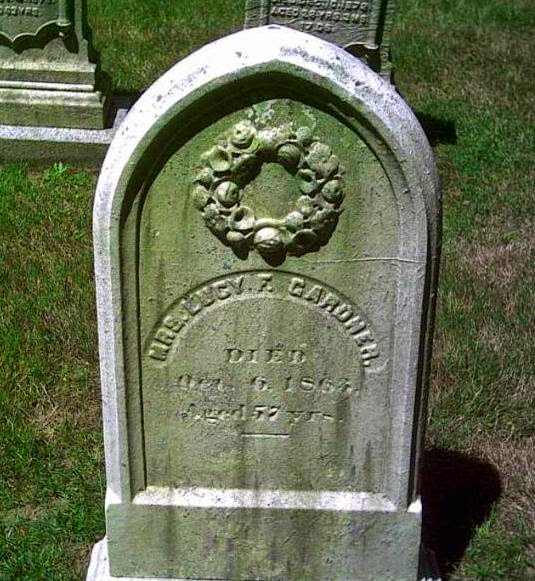 02/07/2015 -- In the What-is-new folder, added a mention of a preview of the upcoming TEG issue and of Henry Howland Crapo (Certain Comeoverers Vol II) who is a Nathaniel descendant.

Posted by AJSwtlk at 2:43 PM No comments:

Work until last week, for the most part, used Dr. Frank A.'s 1907 book. Why? It was available on-line at several places. Last week, we found out that the 1933 book is available, too (post on Heather's brick wall - Benjamin Gardner). It was so good to see this book so that we can continue apace.

Here is the link:

By this time, Dr. Frank A. had gathered a little more information (26 years of work). He mentions the ship on which the family came. And, the Zouch Phoenix is on the list of ships at the Weymouth, UK site.

Notice that the UK site says that the family of Martock, Somerset. Earlier, we saw a Thomas and Margaret married in Sherborne, Dorset. These two places are only about 14 miles apart. 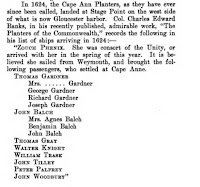 Supposedly, there were some people were left at Cape Ann in the fall of 1623 to over winter. This needs a little more attention.

03/03/2015 -- We have more questions than answers (actually, the preferred state as it motivates more study). Looking at the passenger list, we see Joseph. Dr. Frank has him being born after Samuel. Where is son Thomas who was firstborn (do we have a transcription problem here?)?

Posted by AJSwtlk at 6:34 PM No comments:

Heather Wilkinson Rojo, descendant of Thomas and Margaret through Sarah Balch, has documented a "brick wall" (see below list, Surname Saturday - 3 Jan 2015) regarding Benjamin Gardner (ca 1720 - 1797) of Boston and Salem (MA) who was known to, and mentioned in the diary of, Rev. William Bentley. The following links summarize, briefly, what has been written so far.

Links added after the initial post (in chronological order by the posting).
---

Gardner Research has a lot of interest in how Gardner families might relate or not.

01/03/2015 - Note, Dr. Frank A.'s Gardner Memorial book is digitized and on-line (Hathi Trust). I have been using the 1907 book since it is digitally available. From a brief review of this later book, I can see that Dr. Frank A. made some additions related to Thomas, specifically, as one would expect given the time lapse from 1907 to 1933. So, expect comments, and articles, on differences (see the table of person in the books, side by side). The latter book, Memorial, followed George's line. The first book detailed Dr. Frank A.'s lineage and a few others. Expect an article soon with information about Nathaniel Eaton, who is in the line of Benjamin Brown Gardner.

01/06/2015 -- Verified that the links were going to the right place. Adding links as I find them during a get-acquainted set of searches.

The New England Historical Society has an interesting site (powered by WordPress). I ran across it, again, today, and could not resist this story. There are others of interest, too.

A whaler from Nantucket, Captain Edmund Gardner, fell overboard into "the mouth of a sperm whale" and survived to write about the incident. Edmund suffered some injuries, such as a whale tooth "entering his skull."

Edmund is a descendant of Thomas and Margaret, through both John and Richard. John M. Bullard wrote the story of his life (included is genealogical material).


The book is offered via "Plough Boy Journals" provided through the facilities of the University of Denver website. 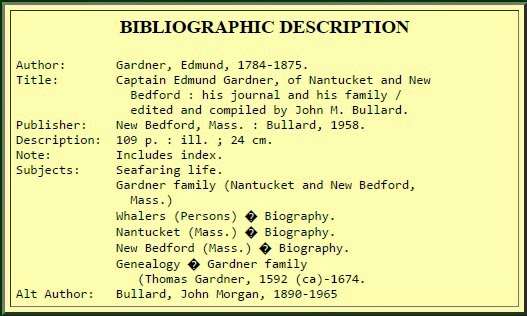