TL;DR -- A New Yorker article was looking at diversity with respect to the smarties of the land. That is, who gets into Harvard. They bring up James Bryant Conant who also got into the Roxbury Latin School on testing. He was a chemist. On looking further, there wasn't any good information about his New England lineage (both sides). So, we started to make the links. Oh yes, that got us to Cape Ann, Count Rumford (whose money Harvard loved to get), JB being trained as a chemist at Harvard as part of their practical education, the SAT (and its influence by the AGCT), and more. Turns out that JB being under the radar is good for Gardner Research. We'll lift him to awareness as it allows us to have a focus on how Harvard behaved over the 400 years.

Several times, we have mentioned someone who ought to be better known in a genealogical sense but who is not. One reason? No descendants to remember the guy or gal. So, if they are not famous, who will do the research? But, JB is noted (as we see below).

We can use Joseph Gardner and Ann Downing in this regard. Ann was the owner of that which became the Bradstreet house. She married Bradstreet after Joseph was killed in a conflict with the American Indians. And so, the house got Simon's name associated with it.

Today, we were reading about diversity versus meritocracy in college, and James Bryant Conant came up. So, Conant? That's Cape Ann. Too, he was head of Harvard for a long while. And, he introduced the SAT which type of testing was pioneered by the U.S. Army (John started this page after a bit of research post retirement) as it tried to cope with the massive inflow associated with the WWI draft.

So, per usual, after browsing Wikipedia, we went to find out about JB's pedigree. Nothing. What? So, we have provided a link from him (Conant-639) to his grandfather (Conant-1769) on WikiTree and will fill in the missing generation.

Here are the steps that were taken. James Scott Conant was mentioned in Wikipedia and in WikiTree. However, there was not much found on the web about JS. Well, there is a Conant Book via Google Books: A History and Genealogy of the Conant Family. Turns out that JS is mentioned. And, JB is penciled in. Only his oldest sister is mentioned. But, using the book, one can track back to  Roger.

This image does that as well as provide the Mass VR Project record on JS as son of Thomas. 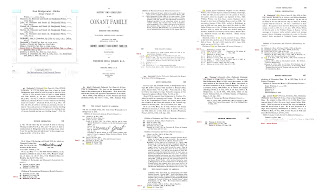 James Bryant Conant
in the Conant Book
But, on WikiTree, an exercise would be to see how far the book agrees with what modern researchers know. But doing that, we ended up at the Profile of JB's grandfather. So, now, it's a matter of looking at the detail a little more.
Now, there are several Gardner connections. Roger came in to replace Thomas. Too, Seeth, daughter of Thomas and Margaret, married Joshua Conant, son of Roger. The book has several other references to Gardner/Gardiner.
BTW, Harvard? We have lots of references here, so far, and will have more. For one, JB was two administrations after CW Eliot who had expected to win the Rumford Chair (see Heads of Harvard and History of Harvard).
We have Seeth marrying a Conant. Ann has Conant in her pedigree as did Dr. Frank. So, there are lots of associations to look into, as well as further diving into things pertaining to the Dorchester Company. 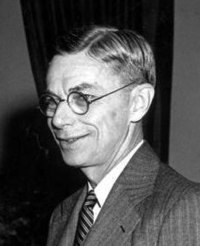 08/27/2021 -- With regard to JB Conant, Frontline did a show on the subject: A Brief History of the SAT. They used a photo of JB and described his influence in getting the testing industry set up. ... With respect to not much being documented about JD's family's history in the U.S., it looks like a subject worth pursuing. He worked on mustard gas as a chemist. As mentioned, he was trained at Harvard which would have him as a beneficiary of Count Rumford's money which was given to Harvard to establish something other than counting angels on a pinhead. We'll go into that more.

08/29/2021 -- JB can be a good example of how to handle Cape Ann descendants with respect to the 400 years that followed their arrival. We need to gather the names and start to start a close look at these families.

08/30/2021 -- In the TL;DR, changed Boston Latin School to Roxbury Latin School where JB got entry through his test scores. 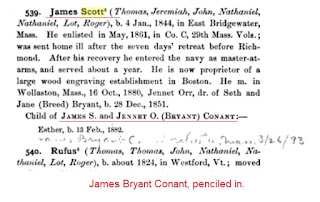 05/05/2022 -- We started the series after reading of the cuz and learned a lot by looking at the perspective of 400 years. As a 17-year- old, the one posting this was in the U.S. Army in the time period right after the Korean incident where the U.S. was licking its wounds. On the other hand, Conant who was precocious hung around Harvard while young. He was well behaved, obviously. Back to Eaton (1st head - more educated than most of his peers of the time), for a moment. Let's compare then with this time of JBC's being in the vicinity. Not with judgment; rather, autodidact humanity studies coupled with computers and physical sciences might be the framework. First, look at the original complaints, with respect to the myriad ships that were afloat at the time. Then? Consider the treatment of the regular sailor (if you don't know this, we'll explain). Also, we'll get more detailed as needed. But, "much ado about not much" comes to mind. As the poster has noted earlier, John Gardner's time out with the surveying crew was cotemporaneous with early Harvard experience. That's another type of comparative study. Conant, though, served militarily. He was involved with some of the modern methods that need types of review, too. It's interesting that besides bringing in testing, Conant is associated with the movement of the institution from serving the pampered of the U.S. to looking for all of the "best and brightest" everywhere. That is, from the pseudo-Brahmin (all societies have this) to the real thing. For now, here are three links, mainly for markers. Conant is not alone in the 400 years. Lots to look at.
07/09/2022 -- Updated the prior remark, slightly. We are starting to use the generational theme more and will include Conant as an example family: 1900 forward. Ran into another Conant: The American Character.
Posted by AJSwtlk at 4:35 PM