The site must move from OfficeLive by the end of next month, April. OfficeLive is being replaced by Office365 by Microsoft. MS did not provide an easy migration method, so we're evaluating our options for hosting servers. As soon as that analysis is done, we begin re-construction on the new site.

In the meantime, Gardner's Beacon is available at:  thomasgardnersociety.club.officelive.com/ (this site will disappear on 05/01/2012).

We'll use this post to keep track of progress using the Remarks. 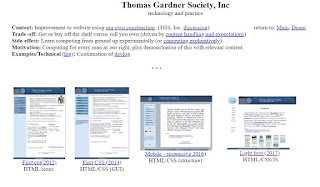 
03/11/2019 -- Will be reviewing all of this due to our new thrust: Content management. What's new? Bringing in ecommerce, in the large and in a non-profit mode. So, we'll tweak things. If I were younger, we would roll our own. We might, if there is interest. As in, young folks, here is a chance to start afresh and to show the world a thing or two.

04/18/2012 -- The new site is operative (thomasgardnersociety.org). References that point to 'aspx' will bring up the 404 page which then has a pointer to the new site. Content can then be read as before.

03/20/2012 -- Figured out how to do pages, using HTML, that look pretty close to what was there on OfficeLive. So, will get that into place soon, as the starter position. Accomplished using SeaMonkey which has a nice WYSIWYG editor (using nested tables).

03/19/2012 -- A good overview of Content Management Systems and a review of the top few: Drupal, Joomla, Wordpress, Mambo. Before, the site used a builder provided by Microsoft OfficeLive. That tool will still be there with Office365, but the costs are going to be much greater which makes the pangs of a transition more palatable. Besides, it's a chance to look at technical issues.

03/19/2012 -- Domain now managed under WebHostingHub, after looking at this matrix and more. Considering, right now, either Drupal or Wordpress (ajswtlk[.]com/node/2 - gone) to handle the formatting. Taking time to review technical issues.

Email ThisBlogThis!Share to TwitterShare to FacebookShare to Pinterest
Labels: Context

This is one of those posts that can be considered a diversion (earlier example) from our normal purpose. However, it does deal with an important theme and does relate to the context of the blog.

Alan M. Turing was born 100 years ago in London. His work in computation was highly influential. The ACM gives an award yearly in his name that is the "Nobel" for computer scientists. In fact, this year, they're gathering thirty-three of the recipients at a meeting in San Francisco.

As an aside, let me note that computation will be important to genealogy in many ways. I have already made one comment about reluctance to adopt new technology (On blogs and other modern means). We could think of many ways that computation will be essential. Here is a very short list (for starters): immersion into gaming environments that unfold events with real characters -- not just those covered by history, extensions of augmented reality schemes to include facts from historic genealogy (verified by NEHGS, et al), ...

As I was re-acquainting myself with Alan's work, I noticed that he went to the Sherborne School in Dorset. Remember that some on Nantucket say that Thomas' family came from that region. The school was established in 1550.

Running across that little tidbit reminds me that we need to learn more about this area, as we try to run down information about Thomas and Margaret from before their 1624 arrival at Cape Ann.


05/01/2012 -- We'll need to talk singularity in the context of Alan. The computer has as many holes as do we; however, we can cut out of the fog. Genealogy (historic, biologic, and more) will be a basis for looking at this concept and its importance. That is a forward look. Going backward, we'll find a way to adopt memes, as a necessity. We are, one might say, meme readers. Too, we express what they convey. That is supposed to suggest something that we need to understand: parallel to we being expressions of our genes. Now, within that framework, our look back at Thomas is apropos.