In his 1907 book, Dr. Frank filled in part of Samuel's tree down to his parent's generation; the 1933 book expanded upon the descendants of George (see comparison of persons in the 1907 and 1933 books). At each generation in his line, he briefly mentioned some of the colonial ancestors of the wives.

Here is an example showing Abel who was the great-grandson of Thomas through Samuel and Abel's son. Abel married Priscilla Stacey. Dr. Frank mentions some names, such as Rev. William Worcester.

Now, when he gets to Abel's son, Simon Stacey Gardner, he only mentions the parents of Rebecca Knapp. Now, her father, Nathaniel Knapp, was of Newbury and has a diary published related to his experience in the Second Siege of Louisburg (Nathaniel's Diary, Wikipedia). Given that Dr. Frank did a series of monographs on the Revolutionary effort in Massachusetts, one wonders why he didn't look further at Rebecca's pedigree. I certainly did, as a newcomer to all of this. Dr. Frank, himself, mentions that the 1758 events were considered a training ground, somewhat. As in, the King's troops learned what they needed to get free.

I am sure that Dr. Frank did look at this part of his history. He could have been mentioned some names, many from the Newbury area. But, he wished to ignore one. Who? On a closer look, we see Nathaniel Eaton. Nathaniel Knapp was a grandson of Benoni Eaton, son of Nathaniel. Benoni had been raised in Cambridge after his family had left. We discussed Nathaniel Eaton earlier when we filled in the ahnentafel for Dr. Frank's grandfather, Benjamin Brown Gardner (TGA Vol II, No 1 - May 2015).

So, given the time of Dr. Frank, who would have wanted to mention Nathaniel Eaton? Well, we will, now. A post (Benjamin Brown Gardner) from that time provides a little information about Nathaniel. After his Harvard ordeal, Nathaniel was in VA for a while. Then, he was at Padua and got two more degrees (MD, PhD).

And, so given that Nathaniel is yearly on the hook (one-sided affair), perhaps, we can re-look at the whole thing and tell the tale properly. It is interesting that in the Wikipedia article, there is some allusion to Nathaniel, perhaps, enduring an early witch hunt.

This time, the study will be done by a descendant. All sorts of viewpoints have been expressed over the years. Below, there are pointers to recent material provided mainly as an example. In doing a brief search, I have found that the subject has been much debated over the years. So, we will be collecting these thoughts and writings.


Williams, G.H. (2014) - Divinings: Religion at Harvard, ... - evidently Nathaniel was on the same boat as John Harvard. Nathaniel's brother, Theophilus, and friends fled south and were founders of New Haven, CT. ... Nathaniel was no slouch (he studied under William Ames at Franeker). 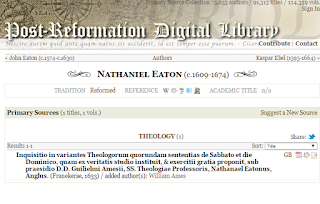 Celebrate Boston - quotes Dutch visitor to Harvard. "We found there," our Dutchman reports, "eight or ten young fellows sitting around smoking tobacco, with the smoke of which the room was so full, that you could hardly see, and the whole house smelt so strong of it, that when I was going up stairs, I said this is certainly a tavern . . . We inquired how many professors there were, and they replied not one, as there was no money to support one. We asked how many students there were. They said, at first, thirty, and then came down to twenty: I afterwards understood there were probably not ten. They could hardly speak a word of Latin, so that my comrade could not converse with them." Why mention this? Nathaniel, evidently, had some runup against youth who may have been rebellious (much discussion will arise here); a question to explore is this, was Harvard the first true experience of the ensuing sense of freedom that is only the privilege of the 1% (or less)? Of course, the Dutch visitor was much later (1680); yet, given the scene, one has to wonder (say, my query asking a comparison - John Gardner and the Merrimack River).

Love it or loathe it: It's Harvard's birthday - mentions Eaton and the early years. Too, puts things into perspective.


Aside: Look on the Talk page of the Wikipedia article (find JMSwtlk) for recent entries, such as students complaining about having to eat the same food as did Nathaniel's Moor.

Last year's research also brought up another character that needs another look. Namely, Sir Christopher Gardner. There are conflicting viewpoints. Gardner Research wants to help set the record straight, or to as close as may be done at this late date.

04/04/2017 -- The topic of late? Bro' culture of Silly Valley. Plus, frat house thinking. Was this an American phenomenon? If so, Harvard got it started early. Imagine. Someone with a PhD level educational experience being short-tempered with brats. Ah, do we not see that every day? But, to think, nothing new under the sun. And, America's roles are sorely in need of further analysis. BTW, I was in the U.S. Army as a 17-year-old, hence my particular characterizations of the matter. We really need a draft and some type of national service. How else can a proper understanding get a basis (that is, what is 'America' and why?)?

06/19/2017 -- There has been a lot of Eaton family research. Hopefully, we can get Nathaniel another look or two. From such, what will ensue?

Posted by AJSwtlk at 5:13 PM No comments:

There are always questions coming up with respect to "all things Gardner." Dr. Frank summarized what he knew about colonial Gardner families in both versions of his book. See image from the 1933 edition: Gardners and Gardners.

This post is about part of the family of Thomas of Roxbury. One of his sons-in-law is the Rev. John Wise. In this post, we will pull together a few things related to Rev. John in order to set the stage for further discussion.

But, first, let's look at his grandmother, Alice Freeman. This graphic (adaptation from Chris Chester's site on Alice Freeman) shows how she relates, as well, to some descendants of Thomas of Salem. 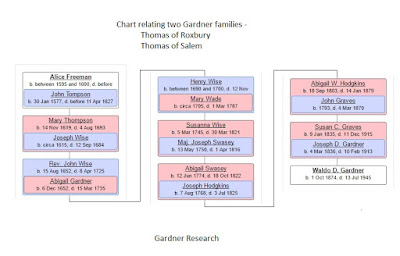 Alice was coined uber-mother by Gary Boyd Roberts of the NEHGS. Her daughters are the forebears of many prominent New England families. Too, Alice is from an ancient Anglo-Saxon line. So, we will be looking at that further.

One purpose for the image is to show the timeline that ends near the middle of the 20th century. Since then,we have several more generations at hand. What is coming up will be the 400th of those first entrants and their lives. You know, the 300th needs some attention, as effects from the War of 1812 were wide-spread (see Gardner-Pingree House).

Now, Rev. John, who was from Ipswich in MA, was called one of the inspirations for the Declaration of Independence (DoI), by President Calvin Coolidge. In the Stories from Ipswich blog, there was some discussion about the motivation for the comment. This image provides a snap of the post showing words from Rev. John and the DoI. 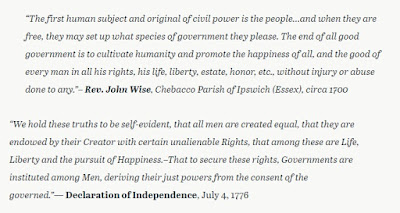 Given the times, we see a lot of interest in the subject. An example is the musical, Hamilton. Alexander is of the Philly crowd (see How powerful is the U.S. Constitution?). But, lots happened before then to set the stage.

As Dr. Frank mentioned in his series of monographs related to the Boston Massacre, many at that event had trained militarily and served under the King (see Regimental History Series).

Now, Rev. John is of interest due to his being both a Harvard graduate and a working man. That is, the Rev. put his muscles to work (those other than the brain). Of course, at the same time, there were clergy who only diddled in religous issues. Too, we had lawyers. But, somehow, the lessons from Rev. John have been lost on the populace. He was no pretend Lord of the realm.

Posted by AJSwtlk at 7:54 AM No comments: