TL;DR -- New England has a long arm as there were two centuries along the East side prior to any attempts at expanding west. For most situations, one can find newly arrived families as well as those of various older lineages. In particular, we will focus on individuals including their business activity. A case is Butterfield who was Yankee and quite active out west. In his life, we see the impact of the Civil War. Too, we see progress via technology, such as the telegraph and the train. Butterfield did other things, but he designed a system to transport people, mail, and goods overland from St. Louis to San Francisco sweeping down through the southern regions. This was a regular activity for more than two years and deserves attention, for many reasons.

The 250th of the American Revolution gives us a chance to relook at history. One thing to note is that the rebellion was the onus of the 5th Generation. Post the conflict, the 6th and the 7th were involved with the fulfillment of Manifest Destiny. Of course, we will look at that, too. But, in this context, we are looking at particular periods leading up to the 20th century whereby the U.S. slowly got its bearings. As we follow the populace, we will note the state of technology and more.

Earlier, we mentioned the Butterfield Overland Express which went from St. Louis, MO to San Francisco, CA by swinging down south into Texas, ran across the bottom of NM and AZ (Tucson), went along the southern border to Los Angeles, and then up to San Francisco. We can do that trip easily now, all by Interstate Highways. The image shows the modern look with about 40 hours estimated for the trip. That means that drivers switching off would make the trip in two days (see map, courtesy of Google maps).

As an aside, flying now from STL to SFO is a little over four  hours. Also, there are faster modes by air.

Even though part of the Butterfield route ran from 1849 until 1882 when the railroad offered a better means, the Civil War interrupted the pattern in 1861. This was a regular run by a system that employed people and animals and required equipment. The organizational work must have been mind-boggling with little communication means beyond telegraph. The Schedule for Sept 16, 1858 lays out the route, the time, and discusses some of the particulars about the company and its mission. 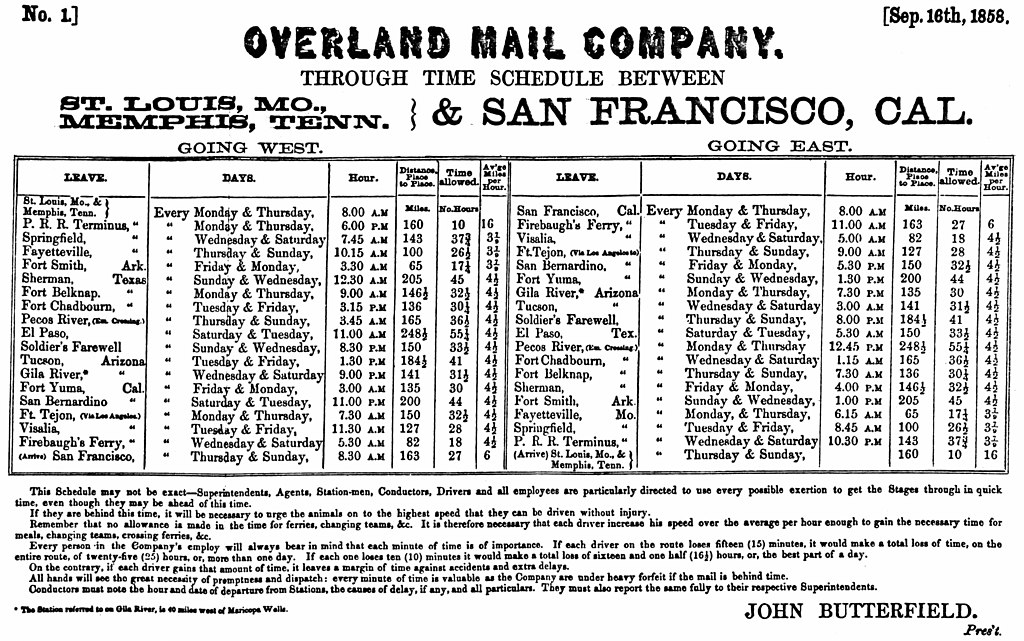 On digging deeper, we found that John Warren Butterfield (WikiTree profile of John) was the owner. Too, he came from New England stock which raises our interest. The part of this route that ran from West Texas to Southern California had been established by another New Englander, George F. Giddings, of the Ipswich, MA family.

On looking further at John, we found that he was involved with the start of American Express, too, with two other New Englanders, Henry Wells (WikiTree profile of Henry) and William George Fargo (WikiTree profile of  William). Yes, Wells and Fargo established Wells Fargo (their motif was a stagecoach with horses) in San Francisco during this period.

As the country expanded, the need for business communication increased all around. Too, the U.S. Postmaster General had the responsibilities for mails and used companies. AmEx started in Buffalo, NY in 1850 but established itself in Manhattan, NY before too long. It's focus became financial express.

As people spread west, there was a corresponding need for personal, as well as business, mail. And, delivery was a growing business. Another business model involved moving people with coaches. Hence, the need for the overland express. Of those available at the time, the Postmaster General decided that Butterfield's express was the most capable.

At the time, there was a more northern route (Central Overland California and Pikes Peak Express Company) which included the Pony Express. This was the means that Mark Twain used to go west and that he wrote of later. We will look further for comparative views on this subject from those who were there. The southern route, though longer, was preferred due to less hassle related to snow issues. However, in the summer, there was the opposite as part of the route was labeled El Camino del Diablo.

The Civil War interfered with the business success of these express companies. Some of the routing was moved up north while the southern route was abandoned. Fortunately, the rail system became a little transcontinental in 1869 thereby offering an improved method for this type of express from Kansas City to San Francisco and all points between That is, there was one line running across the country. Leland Stanford led these choices. It took another couple of decades to get more rail installed. These three maps indicate the rail lines in red. The west is without rail in the 1860s. Then, we see the one line of the 1870s. Finally, see 1890s which still has lots of open space in the west. 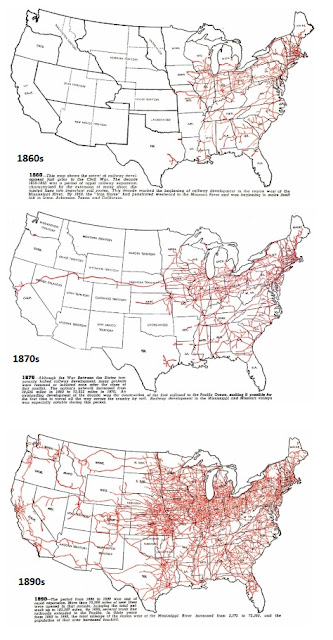 So, things were booming prior to the Civil War as the new nation got its legs. Then, the war was a huge disrupter across the board. It took another generation or two to recover. That, too, is part of the U.S. story.
We think that the western stories need to be brought to attention. For the 300th, the ceremonies were mainly east coast. However, it was not long after WWI. In 1890, the largest concentration of red is in IL showing the prominence of Chicago and its access to the Lakes. The slight red around the lower Mississippi is due, in part, to the river being so useful for transportation. Notice eastern Texas as opposed to its western counterpart. Again, that is due to the flow related to the shipping industry of the Gulf.
Reminder, we looked the Unfoldment. Notice the change of the population pattern through time.