TL;DR -- Before getting into some technical issues, a pause to look at the quick coverage of the interior of the U.S. is in order. In the graphic, the blue are Post Offices (1855 and 1921) as they spread across the country. The red show the railroads (1860s and 1890s). We have looked at the time before technology came about. But, even when it did, there was a natural evolution of ability. In any case, the conflicts of today are nothing new, basically old stuff with nuances related to the current time. So 400 years ago may have been different in a lot of ways, but how close are the people then to what we had 100 years ago?

This post briefly summarizes work that we done over the past few months, much of it looking at the interior of the U.S. We need to get technical, for a while, which will get us back to the issues of content management and more. This has been a periodic occurrence that has left traces (see discussion at our portal - https://TGSoc.org and our technical blog) which follow how things have changed during the past decade and one-half. Lots like to ride the wave (to nowhere). Civilization needs its moments of review in order to stay within sustainable practices. The computer has messed things up. But, also, we have new ways to research and report (that was one motivation for the Web which was based upon DARPA's attempting to have robust communications). We have to keep history in mind, local and global. Too, New England and the Cape Ann crew will continue to be of use to much analysis now and into the future.

Messy now? Yes, but, we were messy before, too. We have been covering the frontier century, for various reasons. One of these is that we have run across lots of families who were early on the frontier and seemed to have lost their lineage. Of course, there were many newcomers during that century. However, there are others who were here whose families moved into states long before they were organized and so left little in the way of tracks.

We call it the lost generation (or two) which is the ones right after the Revolution.

So, one might argue the Boones. Daniel's prominence made sure that people paid attention. For every Daniel, there are 100s and 1000s who get little in the way of notice. Yet, these people farmed, built, surveyed, and more. On that latter, the Bent family whose member was at the Treat signing in Kansas got us on that. The father was the organizer; the son was out in the wilds. The treaty didn't hold like many others. So, we'll be looking at that (1865, Little Arkansas Treaty - that's a river out of CO that runs through several states to the Mississippi).

Along that line, we have pulled some images that bear discussion, especially when we consider the short period of time related to the phenomenon. In this case, it is still the filling in of the interior. We are now thinking of the land being carved up. And, Missouri is a good example being the first one. It's start is in parallel with Maine's. Look at that juxtaposition. As well, the crew coming into Essex County, MA had to get things organized including surveying. Thomas and sons helped with that. John was with the Merrimack crew. In that time, late 1830s, he did learn more than those ones at Harvard. Lots to discuss there.

Ponder this image which comes from two sources: Paper Trails (on the left); St. Louis, MO to San Francisco, CA (on the right). The left column shows the number of Post Offices at two times (1855 and 1921). The right shows the railroads, similarly (1860s and 1890s). 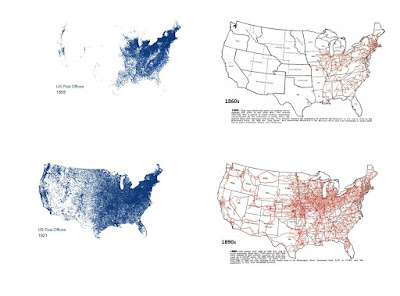 The times are meant to cover a 1/2 century what was from just before the Civil War of the U.S. to around the WWI timeframe. Got that? Internal conflict was the theme of that earlier turmoil. Actually, is. How are we any different? And the latter? The U.S. on the world stage in the context of trying to resolve conflict over there which was of long running, to boot.
Getting back to the timing of those looks, on the left, notice the heavy coverage in the east coast with the sparse dots out west. On the right, notice that the railroad may have been somewhat out to the Mississippi in the 1860s but definitely not the west. A mere three decades later, the railroad did go across the county. For the Post Offices, by 1921, they were everywhere that people were. Those huge white areas are uninhabitable. Or, folks there know that they have to go pick up their mail.
After all, in that top-left situation, mail went west by coach (several ways), the pony express, or by water (a couple of ways). That in itself is an interesting subject that we need to keep the youngsters aware of.
On the other hand, with respect to the railroads, that 1890s coverage was quite impressive. And, it allowed faster population of the areas.
About internal conflict, the Civil War was no cessation. Conflict with the American Indian continued for a long time leaving a situation where the reservation mode under the guidance of Washington DC was the reality for tribes. Lots to look at there.
In short, in one-half of a century, again, the U.S. covered an area that is huge. Folks back east with their notions of wilderness have no idea about the frontier. Genealogists, are you listening? Let's step into modern modes (beyond genetics and microbiology) a little more.