Plus or minus the arrival


With the last Beacon, we started an "annals" approach which will be useful for awhile. The next issue will follow the same format, looking at a period of time that covers 50 years on either side (so, we're talking a span of 100 years) of the arrival of 1623 or 1624. Most, such as the Great Migration Project, have used the latter, however there was a party left here to overwinter in the fall of 1623. Was Thomas with that crew? We'll have to collect the facts and opinions about that event. 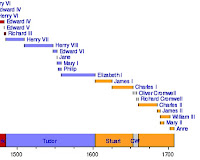 Also, the whole general framework in (and from) which Thomas and Margaret lived (and left) will be of interest and will involve a lot of material, as we know from looking at history. Things to consider would be several: early looks over here (such as Florida, Maine, Virginia and places in-between), what was going on in England (how many transitions of power were there in that span? see image - with a normalized view, one would think about 4 or 5), the goings-on related to Rev. John White's Dorchester Company, and, of course, the family of Thomas and Margaret.

We started to list some of the 400th anniversaries that have occurred or will occur (thinking about preparation). Too, we can look forward to this year being the 500th of the founding of Florida.

Post-note: At some point, we plan to have a database that will be compatible with the current formats for genealogical data. In the meantime, we can have (develop) a web-based look at Gardners in the context of the unfolding of the past four hundred years or so.

10/11/2018 -- Gardner Research is how we are organized. On the plate is a lot starting with extending the work (e.g. Gardners and Gardners) of Dr. Frank.