Did a summary of summaries in December 2019. Started metrics a little later: the metrical.
---
As a means (an attempt) to freeze a point in time (which we know is not possible), the last post of 2011 will list the top four posts in terms of having been read (well, views, anyway). Perhaps, this will be a yearly event.

Aside: As said in Mission and Method, posts are to contribute to a theme, though there may be divergent ones from time to time. Blogs allow categories, but these are problematic since they collect and present in a time order. From time to time, there ought to be a super-post that gives a more coherent view (here is an example - Truth, Fiction, and Finance). Perhaps, that type of thing will be done more often in the coming year.

Of course, I would be derelict if I didn't opine on why the interest.

Posts of interest, as of today: 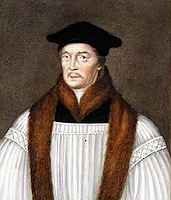 02/26/2013 --  See Wikipedia for a discussion about William Gardner whose page has been deleted.

01/12/2019 -- To support an indexing by thumbnails, we needed an image. This post was multi-themed, so none stood out. However, motivations are always on the table as is the 'whence' issue. The image is from a post in 2013, however this post is still on the most-read list and is a good marker for us in continuing our work. The post: Origins - motivations. We started this blog from a blank state; we found out in our research that Thomas is a hard nut to crack. He was here, left progeny, but never left us his writing (beyond a signature). But, he was supportive of Conant when he arrived, Endicott when he arrived, Winthrop when he arrived. But, Thomas could only endure one session of the General Court. That is a story to look further into (we will). Later, changed to the image of Archbishop Gardiner.