This house is just east of the Essex Institute; actually, it is now part of the Peabody Essex Museum. Some of the features of the house, with a very nice description, can be seen at an arts blog: Part 1, Part 2. 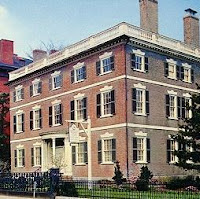 In a brochure for the Hawthorne in Salem walking tour, the house is mentioned as the site of a crime whose trial caught the attention of Nathaniel (Thomas descendant) and everyone else in the area. Capt Joseph White was found murdered in the house in April, 1830. It turned out that the crime had been committed by a member of a prominent family; two brothers from another well-known family were involved in the planning. The prosecution was handled by Daniel Webster who, despite difficulty related to the case, got the jury to convict. The perpetrator had killed himself before the trial; the other two were hung after their conviction.

The Salem brochure says that this house was built in 1804. Then, it says that Joseph White bought it in 1814. Elsewhere, we see that John (descendant through sons, Samuel and George) and Sarah (West) Gardner were the builders. Too, we see that John bought the land from his father.

Then, we learn that the Gardners sold the house in 1811 because of financial difficulties. Which were?

Essentially, it turns out that these were due to losses incurred during events that led up to the War of 1812. John and his father lost several ships to the British. They didn't go broke; but John and Sarah had to sell this magnificent house. We will look at the details later, but John is covered as #162 (his father is #110) in Dr. Frank A.'s book.

Now, we learn further that John sold the house to Nathaniel West who was related to his wife. As well, they lived in the house until 1814, so they did get a chance to enjoy their effort in getting it put together. Then, when the house was sold to Joseph White, they moved.

John and his father owned land in several areas of Essex county. There were other Gardner owners, too. It might be interesting to pull these together. The Dr. Frank A. book might be a start as he did a thorough review of records.

Too, the interplay of families will be a subject worth pursuing. For instance, in this case, the two brothers were of the Knapp family. The perpetrator was a Crowninshield. How do the Knapps relate to Samuel?

Recently, the Smithsonian published an article about the trial.

01/07/2020 -- While looking for information on Joseph Gardner and Ann Downing, I found a reference that seems to conflate the two ladies: The murder that led to the murder of two Presidents. Need to look into that further. See Gardner's gate.

06/19/2019 -- Remembering pending research such as this one. Left comment at Streets of Salem: The Most Beautiful House in America (and the Power of the Place)

12/31/2011 -- Kudos to Louise DuPont Crowninshield for her preservation efforts. Too, we have her to thank for the gardens.