Christmas has become an integral part of our modern society, though there are continuing efforts to lose some of its characteristics related to Christ. So, let us offer you "season's greeting" on this day. Tudor society did celebrate Christmas, as probably did Thomas' and Margaret's families. And, there were things related to the season that had old northern heritage. 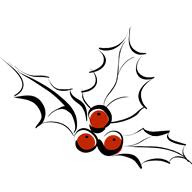 So, what was Christmas, in New England, like at that time? We know that some effort may have already been exerted to remove the more 'pagan' influences. In fact, some may have wanted to ignore the season altogether due to difficulties in establishing Christ's actual birth date. Others wanted more spiritual modes to be followed.

The Christmas season helps start off the winter months during which there can be issues resulting from the cold. Those early pioneers had to actually show that the English could survive in that environment. And, many did demonstrate this.

See Vol. I, No. 5 of Gardner's Beacon for our perspective on those times and trials. Too, we take a moment to list some of Thomas' granddaughters, such as Mary (Gardner) Coffin.

Expect that there will be a continuing threads on this, and related, topics.