We have unclear situations on both ends of Thomas' curriculum vitae (so to speak). Part of our effort has been an attempt at filling in pieces. We have more information about Margaret, now. But, 'whence' is an open issue. We have summary that will be updated from time to time. We have figured out that Thomas' remains were lost: Gardner's Beacon, Vol. IX, Vol. 1.

We know that Margaret and Thomas lived in Sherborne where they married and had the first of their children. Records suggest (absence of such) that the family moved. The children's name match those of the Cape Ann couple: Sherborne, Dorset.

In a discussion, I heard about a case in the Singapore where graves were dumped in a river to make room for a road. The families complained, to no consequence.

So, while looking at whence issues today, I ran across this blog post: These Forty-one Puritan Gravestones. It talks about gravestones being moved without the bodies. It happened to these stone twice.

The significance with this post about the 41 graves are several. Trask is a Cape Ann family. Too, Sidney Perley mentioned that some graves had been moved from Gardner's burial plot to the Trask plot which was almost adjoining. That motivated this New Twist post.

05/16/2019 -- The map that compares Sidney's walk-about with Google is way off. That is because I was looking at landmarks and not paying attention to details, like distance. So, see this update: How close is close ? II. Here is the updated graphics.

Oh yes, we are now honing into the area.
Posted by JMSwtlk at 1:50 PM No comments:

This issue of Gardner's Beacon looks at the last ten years and considers our next steps as well as future activities. 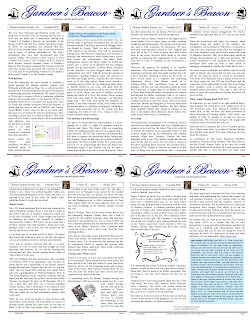 Then, we address the issue of "Where is Thomas?" from the framework of several years of research. We feel that this is an important issue that needs to be addressed, finally. And, we intend to follow this project through until enough is known to 'put it to bed' in a reasonable manner.

For more detail on the map that is on Page 2, see this post: 29 December 1674. That is the day that Thomas Gardner died. The post summarizes a few things and suggests that this issue of Gardner's Beacon was in development. Last year, we summarized several years of queries: The Remains of Thomas. We will be doing another summary, soon, in the context of a continuing project and what we know so far.

We provide a little information about Abel Gardner, who was the grandson of Thomas and Margaret that owned Gardner's Hill and the Gardner burial plot after his father, Samuel, died. He is an ancestor of Dr. Frank and Ann and her siblings. So, this is the issue strikes close to home.

After that, we'll plan how to establish a permanent memorial for Thomas (and the others who were re-interned, at that time). Included will be discussions about a virtual experience of Gardner's Hill and the burial plot being developed.

See Vol. IX, No. 1 of Gardner's Beacon for a review of research to date and more. Sources.

02/23/2019 -- Put in link to prior post, concerning the original internment. A few minor edits on the PDF and image files. Note about Abel Gardner.

We are a little late in doing this post, however we will have a couple more soon. One of our efforts, now, is to get a scrolling timeline view established on our site that is related to Thomas Gardner, the Cape Ann crew, and the U.S. over the past 400 years. The Gardner Annals Volume I, Issue 1 published our first attempt at collecting this type of information. Those annals entries had been first published in several Gardner's Beacons (see Volume II, Issue 6 for the first of these) and were interleaved for the TGA collection to report several events by year. In the TGA issue, we organized the entries into 'Before 1592', 'Between 1592 and 1674', and 'After 1674' which puts the focus on the life of Thomas Gardner.

The idea is to take these entries as an index (even Table of Contents), with additional information, and make it a learning device. Let me tell you about a case in point. Since the beginning, we have been working as if New England did not have any hand in the slavery issue. Beyond, we must add, providing the impetus for the abolitionist's efforts. We have written a lot about the long arm of New England, as in, Kansas is a State started by New Englanders for the express purpose of being an example of non-slavery life. John Brown spent a bit of time there, under his own and an assumed name. However, on reading Nutfield Genealogy, we see that Samuel and Moses Maverick were slave traders. Professor Gates, in his Finding your roots, recently had a descendant of the Mavericks who is a TV personality.

Yesterday, USA Today, in a topical article, had a side bar that was a timeline related to the African American experience in the Americas. The involuntary migration started early. I did not find this timeline on-line but found one that is as good: Key Moments in Black History. The first entry is 1619 and deals with Virginia. The USA Today timeline started post Columbus. So, we will be looking for other timelines on this subject.

Heather, of Nutfield, then mentions the 1779 Slave Petition. On further search, other sites came to fore, such as: Slavery in New Hampshire. Not picking on the State of Rev. Bachiler; we're just getting started. There have been several books on the subject of slavery in New England. I referred to one instance that dealt with Harvard.

Another book dealt with events in New Hampshire, including the petition for freedom by slaves of the well-known families, such as the Whipples. The Whipple slave was with his master when he signed the Declaration of Independence. The chapter concludes with a story of General Washington trying to get back a slave of his who had fled to New Hampshire.

So, given our themes of Culture, History and Technology, we will look at all aspects of life over these past hundreds of years, especially with an eye toward things that are still pertinent but overlooked (or, are unknown).

Posted by JMSwtlk at 4:19 PM No comments:

While browsing today, for another post (to be published after this), I saw that there were books of Dr. Frank's for sale on e-bay. On a closer look, these were reprints and are fairly recent. So, for now, here are the links. There were three books that caught my eye, originally. But, on closer look, I see that there have been more reprints. So, let's start with these three to see what's up.

In the modern age, many have gone back and brought classics forward. So, it is good to see this effort. We will do a review after some study of the situation. As, one of our goals is a redo of Dr. Frank's work. However, we would use modern referencing methods and cover all of the children.  Too, we would look more closely at the collateral families. Dr. Frank did an excellent job given his time and the technology available.

We will survey some of the other publications and continue this theme.


In following up on some research, I ran into some material about reprints of Dr. Frank's 1907 work. So far, what I have seen concerns the 1907 book and not the 1933 one. That might be due to some copyright constraints. Have to look further.

One of our projects is to get Dr. Frank's work up to date. And, that would include a rewrite of the former material with notes added to bring in the modern view as well as introduction of new material. If we put in an image, it would be for effect.

This post is a start at looking at the reprint phenomenon. They do image enhancements, essentially. There is a lot to discuss. We can, actually, get started on this now, after some work on ways as well as mean. Along with this work would be continuing upkeep of the website plus the blog (or two or three). We could have a lot accomplished before 2023/3 comes along.