Note: See Remarks, 11/14/18, for a view of the colonial (via Perley) with the modern (via Google). We will now be able to do a "missing tombstone Tuesday" for awhile.

Sidney comes through, again. First of all, he and Dr. Frank worked together. Then, Lucie picked up Sidney's work and published such in The Massachusetts Magazine. So, expect to hear more about Sidney and his work, such as the following.

Of late, I have been trying to assess what happened to the bodies at Gardner Hill. When I first started this work, the general thing was there was a transfer to Harmony Grove Cemetery. That is, everyone was moved nicely. Re-interned, in other words. But, where in the Cemetery? By the Peabody gate? And, one write up says, well, it was only a handful of yards. In fact, there is misinformation everywhere I go to read on this topic.

So, we'll post an improvement once we know a little more.

Well, let's look at Sidney's map (The Essex Antiquarian, Vol VI, No 4, October 1902, pg 149). He shows the burial plot as being north of the Trask one. Too, it is toward Boston/Main. So, according to the scale, we're talking a couple hundred of yards.

Of course, Sidney did this from the ground, given his times. However, he was thorough so I accept his depiction. According to the satellite map of Google, we are talking almost 1,000 feet (well, 300 yards).

However, there is a winkle. Dr. Frank saw notes from Samuel Pickering Gardner where he mentioned his visit to the burial plot in the 1830s, before the road work, and some stones had already been moved and some broken. In other words, graves were already lost in terms of identification. All for commerce. Of course, Samuel P. was upset.

And, Samuel P. said that the seller was William (Harvard grad, so we're talking a secular influence more than mere money - well, it's a debate that continues) who I am researching further (How close is close?). He is a descendant of Samuel (#6 in the book), son of Thomas. Now, Samuel P. is a descendant of George (#3 in the book), who was the brother of Samuel. In this map, the Samuel who owned the plot north of Abel is a son of George. And, Samuel's plot is right above Abel's who was a son of the original Samuel.

This re-look came about since I heard this year that stones were moved. What? The bodies were cast into the river? Gosh, the fire? Payback? So, we can say, some. How many? Who was there? We need to research this. Where to start? All sorts of questions.

Well, this is more of a story than the witch thing that is so popular, somewhat. We have culture (Harvard and not), history (the rush to do shoes, etc.), and technology. I'm trying to envision how Gardner Hill was leveled. Too, what was the elevation change? All of this can be answered one way or another.

However, Sidney saves the day. He mentions that some bodies were moved to Trask's plot. That makes a whole lot of sense. So, thank you, Trask family. Their plot was closer, actually, than Harmony Grove. It wasn't commercial (don't worry, I have been gathering the history of the place, before, after and so forth). 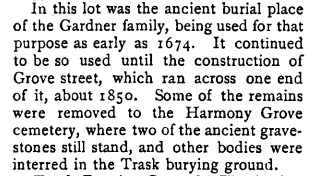 At least, we need to get the verbiage in an improved state in order to tell the story a little better.

Of course, the seller did not get the buyer to honor the 'in perpetuity' that was supposedly left behind. Ah, lots of other angles to look at, too.

11/14/2018 -- Finally, getting somewhere. Pushed this image up to the New England Family and Genealogy group on Facebook with comments. Too, it shows the deal. In essence? Stones were moved in the 1820s and 1830s and piled. Hence, graves location were lost. One of these was that of Thomas Gardner. We want an inventory of the others. How to do this? 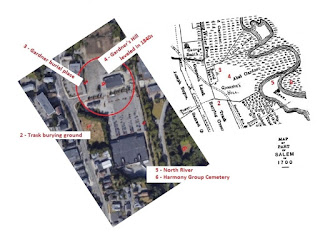 #3 was the burial plot on the side of Gardner's Hill (#4). #2 is Trask's plot to which some bodies were moved in the 1840s. Some graves may have been moved to #6 which is across the river. However, stones were moved as #6 claims. The real issue is that re-internment has become the assumption. Not, people. We need to weed this out. The irony? The current #4 spot is the site of The Holy Ghost Society which was built by Portuguese immigrants.

12/06/2018 -- The Richard III Society reported that a 500 year old body had been found in the Thames. Its skeleton was still there. Too, a pair of boots indicated something of the person's life. Now, the burials at Gardner's plot were from the latter part of the 1600s to the early part of the 1800s. The trashing of the graves was due to commercial interest. Too, the plot was sold by someone in the immediate family, as in a descendant of Abel (Samuel, Thomas). Abel was buried there, too. His stone, and that of his wife, was moved. More coming.

12/08/2018 -- Back in October, this post (Gentleman, every man, and much more) was started as a basis for the discussion and research work. In it are early posts which show the naivete of those times having just started this stuff. Never would have thought that this incident would have been allowed to go under the radar. It's being raised as one of the many oversights to correct in the upcoming 400th.

05/16/2019 -- The map that compares Sidney's walk-about with Google is way off. That is because I was looking at landmarks and not paying attention to details, like distance. So, see this update: How close is close ? II. Here is the updated graphics.

Oh yes, we are now honing into the area.