The Gardiner that was

Note: 11/13/2018 -- Note the log at San Francisco, August 1850, with ships seen in the southern Pacific and the links to information about these ships (being updated) including corroboration of being at Pitcairn Island in June of 1850. What cargo was obtained in New Zealand? Other questions abound.

The following comment was left, today, at this page: The Gardiner that was. We left one in 2014, but it never appeared. So, we're trying, again.

The town got its start with material on the boat plus salvage of the boat, itself. They ought to be interested in who funded their beginnings.

We intend to re-write the paper.


We first wrote a note (here) in 2014 (it never appeared) when the query first came in (from an Oregon resident) to Gardner Research. Who was this Mr. Gardiner?

In 2014/15, after researching the topic, we published an article on H.D. Gardiner (his brother, C.F.) and their barque, Bostonian. They were, in part, shipbuilders, so they had many vessels. As well, we had a little information about H.D. and his family.

As one looks around, there are lots of different tales. We are trying to pull all of these together.  After four years, we have a lot of gathered material to look at. And, we ought to get the story in a better mode. In fact, we want to start a specific page for H.D. so that people can read about this incident as well as the following events.

The barque left Boston in July of 1849. It arrived in San Francisco in January of 1850. It was carrying liquor which we learn from an ad in the S.F. paper. But, we also know this as it was noted in Boston prior to departure. In April of 1850, the barque was in New Zealand picking up supplies. We know this from the Southern Cross. It was remarked that they did that jaunt in only 45 days. We have a timeline of the barque's activities prior to its leaving Boston. It was speedy and set some records.

A couple of official reports note that Captain __ Boyling was commanding. There were casualties in the area. One report gives their name. After the wreck, but still associated. Some reports note Snelling as commanding whom we have researched, too. He was on the Kate Heath when it returned to S.F.

Recently, Coffin was mentioned as he also is in some reports. All of these are of New England, so we are interested.

The reason for this note, in part, is that we want to update the article with the additional information. In doing so, we would like to hear more about this story.

Sponsored by Gardner Research of the Thomas Gardner Society, Inc.

11/06/2018 -- As I mention, I have a slew of material gathered about this subject that will be of use at some point. We have had contact with the family. In general, the western expansion studies will continue.

11/07/2018 -- We attempted to contact interested parties via the Wikipedia page for Gardiner, Oregon (see Talk page). So, today, I pulled the sections together, pointing here. There might be different motivations. We came at this due to a query from an Oregon resident about Mr. Gardiner. And, we had to look at the ship, too. The site has a history that needs to be looked at further.

For starters, let's look at  images from different sources. Some of these will have already used in this blog. Others will be new. As well, we need to look at the overall context of this research.

This is a timeline that we put together that was published in late 2014 in The Essex Genealogist. The image is from the manuscript for The Gardner Annals, Vol. II, No 1. There are other reports that will be published as this work continues.

In March of 1848, there were duties paid in Boston on nine thousand gallons of liquor. So, the load to San Francisco would not have been the first. That load was picked up in May of 1849. The barque left Boston in July of that year and arrived in the January of the next year. See Sourced timeline for barque Bostonian, dated 7 Apr 2015.


This is the context: A History of the Pacific Northwest as well as the extent of the gold fever along the west coast.

11/08/2018 -- We want to detail some of the issues related to the loss. We see that three men died in the area. As reported by the captain of the Kate Heath. However, losing a ship is costly, itself, upon which is piled the cargo. Then, one has to consider lost revenue. Thirty some years earlier, lots of families had major losses due to the War of 1812 which devastated some east coast companies. C.F. and H.D. lost a later ship through its foundering while trying to rescue the crew of another vessel.

The captain of the Kate Heath got back to S.F. in December of 1850. His vessel was the first to come upon the shipwreck'd Bostonian. Note, he reports that Captain Boyling was commanding. Also, Snelling is among the passengers returning to S.F. It has been reported that Snelling was related to Gardiner and was in charge.

Aside -- Around the Horn: The Journal of a Voyage to San Francisco. William De Costa. Book review and some content, courtesy of The Missouri Review, 1 Mar 1992. In the case of the Gardiner shipwreck, there was no journal that we know of so far. 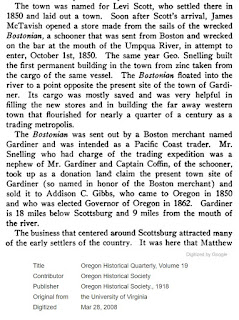 Notice that Snelling is on the Kate Heath when it returned to S.F. in December. Also, it does report deaths, after, but in the area. We need to identify the men.

Coming up will be some information about the principal players, including more about H.D. and his brothers.

For instance, who were the four passengers on the barque Bostonian when it left Boston? We know their names and their areas of residency. What became of them in S.F.?

A nice overview of the era, from the shipping view, is Arthur Hamilton Clark's The Clipper Ship Era. Chapter 7 is titled: The rush for California. 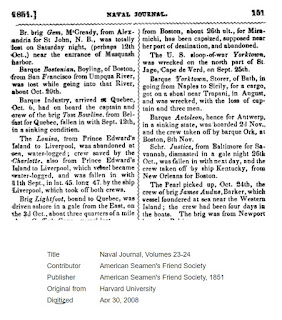 This 1851 report notes that Boyling was in command of the barque when it wrecked.

The captain of the Kate Heath gave his report after he arrived back to San Francisco in December of 1850.

1994, National Register of Historic Places Continuation Sheet (PDF Section 8, Pages 8, 9, 21). Mentions both George Snelling and Coffin as captains of the Bostonian. Also, says Henry Gardiner "owned most of the cargo."

Letters to Joseph Lane (Oregon's Governor, Congressman) from George L. Snelling (13 May 1854 to 29 Jan 1855 (5 items). Index does not show where the letters originated (by this time, George was in Massachusetts).

Some of the letters are on-line. Joseph mentions that George left Oregon and married. There are references to business exchanges from Massachusetts.

Summary: George was born in 1827 to John Snelling and Charlotte Swain. George L. Snelling married Anna Crocker on 24 July 1854 (Mass Vital Records) in Cambridge. Rev. Abbott Smith did the honors.  George is in the city directory (Boston) in 1856. He was with Crocker & Co. George died in 1900 in New York City. He was recorded as a Sea Captain. ...

11/12/2018 -- A puzzle. 1848, Chapter 319 - Massachusetts General Court: George Henry Snelling may take the name of George Lester Snelling. Need to sort this out: there are two George Ls; is this the George? There is, at least, one other case of name change related to this study that I saw four years ago and will go back and pull out.

Now that we have Lane's letters and established that George returned to Massachusetts, we can get the Vital Records for him, Anna, and others. We will be updating the article after we settle issues. Then, another whole view is apropos as the story has interest from many perspectives. For instance, what was the barque Bostonian up to from Jan of 1850 until Sep of 1850?

George remarried in 1861. That is, there is a George L. Snelling with John & Charlotte for parents. This, again, is in Mass Vital Records. The groom was 34 (so 1827). The couple were married in Somerville, MA.  What happened to Anna?

George was initiated into the Masons in Dec. of 1855, Hiram Lodge in Massachusetts.

His mother, Charlotte, was daughter of William and Miriam Swain of Deer Isle, Hancock, Maine and was born in 1802. His parents married 06 Jun 1824 in Boston.

Back to Gardiner. We have a lot more information on H.D. and his brother, C.F. For instance, this look at one of their products: Looking at Gardiner’s Rheumatic and Neuralgic Compound. This post mentions C.F. quite a bit. The link to Dr. Silvester was correct. The lineage of C.F. and H.D. is mentioned in the book written about the descendants of George Gardiner of Rhode Island. H.D.'s grandfather, Gideon, was first cousin of Dr. Silvester who was a loyalist. H.D. dropped his first name, Silvester.

This we see from the Daily Alta California, Volume 1, Number 195, 14 Aug 1850 (will get a better transcription, this one was automatic) ---
The ship went south to New Zealand. Evidently the liquor was still on-board, but it picked up other material. Ships signaled each other and reported their sightings when in port. So, in the log, ships recorded were by time: March - William C. Nye (Rose); April - Swift (Vincent), George (Clark), barque Sol Saltus (Stafford); May, Orion (Ray), Alfred (Davenport); June barque Hoogly (); Sally Ann (Brooks). The log indicates that the barque Bostonian was at Bay of Islands in June.

11/13/2018 -- Cleaning up the transcription. Also, for each vessel, a bit of additional information has been identified.

In terms of the Orion which the Bostonian saw in May, by 1 July 1850, it was in San Francisco about to  be auctioned off. Did the crew abandon ship in order to pursue the hot item of the time, gold?

Now, let's go the southern media of the time. The image on the left is from The Southern Cross, 23 April 1850. The article provides 2nd hand information about the barque Bostonian. Then, it scoffs.

Social media by wind speed was no less of a problem space as we find with the light speed mode. The purpose was to obtain timber and potatoes.

The image on the right is from The Southern Cross, 26 April 1850. Or, three days later, the sighting is confirmed. The article turns to discussing trade with California which makes things interesting.

In reading the newspaper, one cannot help but think that a Brit brain was languishing in the southern areas and was bored to tears. On the other hand, it is nice to read the flowery and flowing verbiage.

HD's grandfather was Gideon. His father was John. HD dropped Silvester from his name.

Futures -- We'll have a re-look at the Gardiner family. Also, there needs to be some collection of things to change, such as the database sponsored by the Nantucket Historical Society and a list of on-going items needing more research. Will start a new article for the next issue of The Gardner Annals that will include an update to H.D. plus add in Snelling, Coffin and others. All of these are our cousins. Need to look further at Boyling. Finally, the ship met at sea with 'wind' time as a type of social media. At least, they did not abandon the barque Bostonian and take off for the oil fields. There were many ships left to drift in the area. One estimate said hundreds. Boston, itself, sent over one hundred ships to the left coast.