In today's Salem Gazette, John Goff writes about "Some old Salem ties to Nantucket" and references the Thomas Gardner Society's website. In the article, John alludes to the peaceful nature attained on Nantucket as opposed to the more cantankerous mode (my usage) in parts of New England.

Earlier, John wrote about King Philip and about the turmoils related to his time. John and his co-author ask what-ifs about more peaceful approaches, albeit that the die seemed to have be cast earlier. Many left the old country to get away from violence (Laud's love of nose splitting and ear cutting off, as an example). Too, it was in the King Phillip's war that the Gardner family lost a son, Joseph, however Thomas and Margaret were already passed on.

Aside: Governor Simon Bradstreet married Joseph's widow, Ann, who had Gov. Simon sign a pre-nup that she drew up. The house is remembered by his name, though.

John Goff is one of the many modern descendants of Thomas. He will be the first in a series that we will start on descendants. We first ran across John's work (Salem preservation and newspaper columnist) on an early web search for Gardner which turned up the article on Gardner/White (the post was from 2011).

John's ancestor is Richard who was the third son (Dr. Frank's book) of Thomas and Margaret. Then, John's lineage continues with Richard's son, John, who married Mary Starbucks and, then, Elizabeth who married Stephen Gorham.

One planned activity will be to go through John's articles at the Gazette and create an index as part of our bibliography. For instance, this little bit on the Pioneer Village was a great read. It got me to look at Nathaniel's (a Thomas descendant) book, Grandfather's Chair (courtesy, archive.org). The Pioneer Village has a replica of the Great House (Cape Ann) that was taken over to Salem on orders of John Endicott (Winthrop dined there).

Also, John has written of the Salem historians: Joseph B. Felt, Harlan Horton Smith (worked on the Pioneer Village), and more.

This is the Google search result for "John Goff " at the Gazette site. The theme, for the most part, is Salem and early New England. Hence, these articles are of interest to the TGS.

Posted by AJSwtlk at 7:11 AM No comments:

As we know, Roger came into the Cape Ann area at the request of Rev. John White (more below). We had an earlier post that considered some differences between Roger and Thomas. Too, the last Beacon issue looked in a Annals format (we're going to use this for awhile) at several things, one of which was John's (as in, Endicott's) relationship with Thomas (as in, John knew that Thomas was a "Mr" and related to him thusly). Thomas and Margaret were resident in the house when John had it knocked down and brought over to Salem.

Aside: By the way, we're going to document this more thoroughly on Wikipedia - Great House (Cape Ann). We have John Goff's expertise available to assist us. This house was the first of its kind in New England.

This would mean, given the association mentioned by John Goff (in his article), that the Elizabeth who married Lot was a grand-niece of Thomas. However, according to a UK page, dealing with the Dorchester Company, the sister, Elizabeth, of Rev. John White who married Thomas Gardner did not have a son named Thomas.

As you can see by the links, we are, mostly, in an acquisition'l mode. The intent is to find out all of the sides and their supporting material. The hope would be to find some reasonable story that has good support. Now, when it is a case that is not so strong, we can make proper conjectures. To wit? About the number of wives of Thomas: we say two.

The beauty of newer methods (disparate view bridging in the cloud) will be to allow multi-faceted looks at something. We don't live in a black/white world. Yet, even fuzzy approaches can (must) de-fuzzify now and then. How to present the material with the proper richness will be a continuing challenge.

Aside: There are many such questions to work on.

02/06/2019 -- Last night, the 'Roots' show (PBS, Gates) reported on Mike Stahan, a TV personality. Mary Gye came up with descendants of a mix of Essex County families. Her granddaughter married Samuel Walton whose father was a nephew of the good Rev. Samuel's sister married the son, Lot, of Roger Conant. Lots to look at regarding this particular tree (southern moves, etc.). For now, a brief mention with a graphic.

06/15/2013 -- Was there a Thomas and a Thomas? -- About a funny uncle, I'll admit an err. Based upon what I've seen in researching for the next Beacon issue (and even from personal observation), uncles are not saints, many times.


Earlier today, we got notice of the TGS blog being submitted for the award by Heather at Nutfield Genealogy (thank you, Heather Rojo Wilkinson). I have returned to the Nutfield blog many times while trying to untangle some of the genealogical knots that seem to lurk about.

The award is sponsored at the following link; the rules are posted at the link (and are provided below). For item 2, look after the rules.

1 Select the blog(s) you think deserve the ‘Blog of the Year 2012’ Award
2 Write a blog post and tell us about the blog(s) you have chosen – there’s no minimum or maximum number of blogs required – and ‘present’ them with their award.
3 Please include a link back to this page ‘Blog of the Year 2012’ Award – http://thethoughtpalette.co.uk/our-awards/blog-of-the-year-2012-award/   and include these ‘rules’ in your post (please don’t alter the rules or the badges!)
4 Let the blog(s) you have chosen know that you have given them this award and share the ‘rules’ with them
5 You can now also join our Facebook group – click ‘like’ on this page ‘Blog of the Year 2012’ Award Facebook group and then you can share your blog with an even wider audience
6 As a winner of the award – please add a link back to the blog that presented you with the award – and then proudly display the award on your blog and sidebar … and start collecting stars…
---

02/21/2013 -- Mark's blog has an interesting list of posts related to forebears prior to the 'puritan migration' that will motivate a few here (next post): Shakespearean ancestors. Evidently, Downton Abbey (I have not watched it, yet) has people thinking of the little realm of our ancestors. We can use the meeting meme (ala the 1692 turmoil) to cover the gamut from William's bit of ambition involving all sorts of inter-family squabbles. You see, Thomas' mixture (genes/memes) encapsulated that (as does all of our glorious selves, in one way or another). His life and choices exemplify much for us to try to know and understand.

02/07/2013 -- Found another blog of note: Gene expression (post at this time had a photo of John Quincy Adams). Note the criticism of The Seven Daughters of Eve. As I find them, I'll add 'em here.

Note: 05/24/2017 -- Database problem. Most likely will shut this down and move to another technique.

To facilitate discussions, and activities, related to the 400th anniversaries and more, we have added a bulletin board to the TSG site. There is an easy registration step (or, browse and post as guest) including one little bit to verify that the one registering is a person (inhibit spamming).

For now, no moderation is planned; we assume the usual protocols of good conduct. 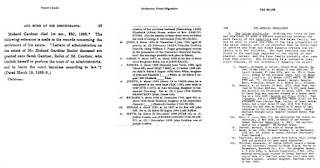 There are two threads now: birth order of the children (see the image which is cut from Dr. Frank's and Anderson's books) and initial entry of Thomas and Margaret. But we expect this list to grow. Anyone can add a thread.

It is expected that some facility like this can be used to coordinate a group's interaction and to keep things moving forward effectively.

03/02/2013 -- Putting in the agreement didn't help. Evidently, people don't read the things. So, the spam continued. As of a few days ago, the automated registration has been disabled. New accounts can be obtained by mailing jmswtlk[@]thomasgardnersociety[.]org. Specify desired ID and particulars about your interest in the TGS. Namely, family and friends are welcomed.

01/24/2013 -- Due to spam registrations, the TGS BB requires an approval. That is, go to the site's registration page, check that you read the agreement (note, for family and friends of Thomas and Margaret () Gardner of Salem), fill in the needed blanks, and then we'll get a notice. As mentioned in the What's New at the TGS BB, we intend to have a persistent site. However, there will be improvements as we go along. Data will carry forward.

01/12/2013 -- Split TGS BB (forum) into public (can be read by guests) and private (requires registration and login) areas. For instance, the Social category has Water Cooler (public) and Break Room (private).

01/11/2013 -- Added link to TGS from FamilyTreeCircles. Found this while searching for Rachel, proposed sister of Thomas, after seeing her mentioned in another blog (Turn the Hearts). I had seen her in early browsings, but today I decided to look in more details.

01/10/2013 -- Added in a "water cooler" board, for general topics, a what's new board, and renamed the working category to Family focus. Some of this ought to be members only, perhaps, leaving only overview items as public.

01/09/2013 -- A BB is fluid, essentially. A blog is less so. One would expect that we would take information that comes in via the BB and structure it, with other information, into other formats. How this might be done will be discussed further, at some point.

It's hard to believe that the 400th is right around the corner; it's close enough that we could start counting down now with 10, ... Also, which of the 400th anniversaries will we feature?

We could start with the marriage of Thomas and Margaret, though we don't know the date. We do have the birth years (approximate?) of Thomas, George, and Richard that would be prior to the Cape Ann venture. One goal might be to get the arrival time a little more clear (I've seen quite a range of guesses) even if we can only identify the time that has the most support (to be discussed).

For starters, the below list is to be taken as cursory (see TGS site for an early start on this), for now. There is a whole lot that could be done; and, a lot needs to be done once decisions are made. The bullet order does not imply priority. Some things may need more immediate attention than do others.
There can, no doubt, be more items added to this list. For instance, having a place for regular discussion would be nice. Too, a common method for submitting trees ought to be facilitated, at some point. The idea, now, is to start small and to build incrementally. Hopefully, if this is done, more or less, correctly, there would be fewer false steps.

Of course, technologies will change. Bridging these types of changes over time is an open issue. Perhaps, after the bursts of knowledge of the last 100+ years, or so, settles down, there will be better effort at preserving states of knowledge.

Actually, one talent that we humans have (not yet replicated by the artificial, yet) is creativity which can span across seemingly endless states without getting lost. So, our intent will be to foster the human side of creativity going forward. Perhaps, that might be one lesson of Thomas and Margaret.

01/07/2013 -- There are many anniversaries to plan for. Also, to the above list, we ought to firm up the order of birth. Let's say that nine children is the agreed upon number. There will be a post on this, soon.