The theme of 400 has been constant for a few years, covered in many posts. Some of these posts are mentioned below, in no particular order. Each will be revisited for updates.

An example would be Plymouth's plans (both sides of the pond). We can use that as a something to watch and learn from.
So, by generation (using an average of 25 years) count, we would have sixteen. I looked at one line that consists of fifteen generations. Of what? The American experience which we will have as a topic next year. One of our topics, too, will be Historical Puzzles of which there seems to be no end. A very important one will be addressed, initially, in January of 2019 (please, stay tuned).

But, we would be remiss without mentioning the Final Migration. Yes, just as we look at the arrival by water, we can look at the western migration. Those early attempts will be in focus, as movement away from the coast happened almost immediately both in Massachusetts and Virginia. Of course, the 'final migration' was after the Revolution. So, that theme will continue (Dr. Frank's TMM had an article on this conflict every issue for a decade quarterly), too.
Of course, the overall theme is culture/history/technology which will be further discussed as the overarching concept for carrying research into the future. In that will be people, leading to genealogy. Of late, we have rediscovered WikiTree (original look, 2014). It was used to settle, somewhat, the wives issue (Margaret anew). We also have used it to expand Dr. Frank's tree using his hand-written notes for his mother's line. Turns out that he is descendant from both wives of Thomas. 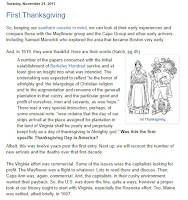