Posts by month by year

Back in September, we looked at an old chart that showed posts by month by year and brought it up to date (see post, Review and news). At the time, we were reviewing posts in order to present an index from our web site: TGSoc.org. This is our last post of the year.

With 2018 coming to a close, we can update the table through December. 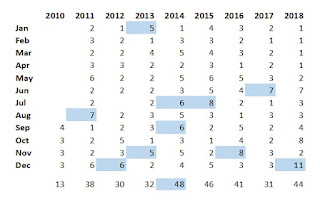 We started the blog in 2010 and did not count the month with the greatest number of posts for that year. In the "Review and news" post, for each month, we looked at what was going on as that is a huge factor in the number of posts.We will be looking at that further.

So, this month, we had the largest number of posts at 11. The highest before then was 8 posts which happened in two months: July of 2015 and November of 2016. In July of 2015, we were first looking at The Massachusetts Magazine. Subsequently, we went through every issue and its articles, did several posts on articles in the TMM, wrote articles for The Gardner Annals which were printed, and captured the Table of Contents. In November of 2017, we were writing the first article for Volume III of The Gardner Annals where we looked at contributors plus provide the TOC for the first five volumes of the TMM.

We will continue to use the blog to report on research as well as to keep track of current items as we go through our work. The blog has proven itself, and uses of the tool are found everywhere. The 11 posts for December show some of the range that has been covered by Gardner Research.