We are putting together the next print of The Gardner Annals. It will include Volumes III and IV and the remainder of the issues of Gardner's Beacon. This is the proposed Table of Contents. 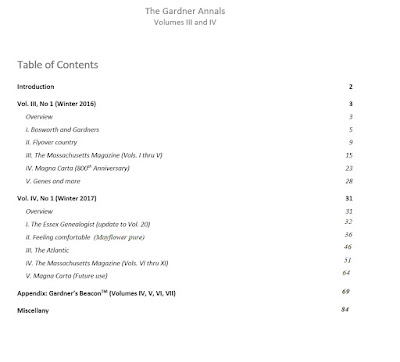 There is still time to suggest an inclusion. Like? Something that you have written about your line. An overview of your relationship to Thomas Gardner of Salem. Any other pertinent topic? Notice that we included a guest article on 'Bosworth and Gardners' and 'Magna Carta' in TGA, Vol. III.

We published Vols. I and II this fall. Next, we will have Vols. III and IV. Then, we expect to publish once a year given the material that is available.

Lets us hear from you at publications@TGSoc.org.

This past fall, Alfred L. Gardner, Ph.D., a descendant of son Samuel, was named a Lifetime Achiever by the Marquis Who's Who. In 2016, Alfred 'earned a Scientific Achievement Award' from the US Geological Survey.

Born in Salem, MA, Alfred moved with his family to Tucson, AZ after WWII. He attended Tucson High School. As an undergraduate, Alfred was a R.O.T.C. commander at the University of Arizona. He completed his education at the University of Arizona, Louisiana State University, and the University of Texas (M.D. Anderson Institute). After a teaching stint at Louisiana State and Tulane, Alfred moved to Washington, DC to work with the Patuxent Wildlife Research Center with his offices in The National Museum of Natural  History - Smithsonian Institution. Alfred served as Curator, for a time, at the NMNH. Earlier, as a young biologist, Alfred helped establish the displays at the Arizona-Sonora Desert Museum which is near Tucson.

Alfred is a member of many scientific organizations, editor of several journals, author of over 200 refereed papers, and is a Fellow of the AAAS.
---

This is the first of a series where we would like to announce accomplishments of descendants of Thomas and Margaret Gardner. For those, we can do an ahnentafel. Alfred's paternal grandfather and grandmother are fully documented in the 1st printing of The Gardner Annals (Vols I and II). Alfred is also a descendant of Thomas Gardner of Roxbury.

02/27/2019 -- This is not really the first. Earlier examples are: Nathaniel Bowditch, Ruth Gardner, Adolphus Greely and George William Coffin, and John Goff.

11/11/2019 -- Alfred is a veteran having served in the U.S. Army reserves for several years. This example of a profile can have various themes. See the Wikipedia page for the American patriots (and military) section which has a list that needs further attention.

Posted by AJSwtlk at 1:12 PM No comments:

Let's see, from the beginning, I have seen Thomas as an example of the American everyman. I gave him a title of the 'backbone' of the country. That is, his type represents such. There has been a whole series of posts related to this, such as juxtaposing John Gardner (son) being out with the crew that mapped the Merrimack with those of the early Harvard times arguing the 'angels on a pinhead' sort of thing. Too, Thomas appeared to be the first true gentleman of the Dorset effort. He stepped aside for Roger (ancestor, so no conflict there). Of course, he did get back the house when Roger and friends went over to Salem (see Cape Ann, of course and (Not) Far from idyllic). There are more posts on that theme. When John (Endicott) came over, the great house was in good shape, enough to be moved to Salem. So, Thomas and Margaret and kids, evidently, took great care of it.

Now, switching perspective, of late, I have been studying Virginia. We did live there but did not pay much attention (you know, big DC across the river). Then, I started to research families who were both of the south and the north (Southern New England). Then, I read a book review recently that talked the early times. After all, did we not see the Mayflower celebration, again? So, who had the the First Thanksgiving over here. I remembered a book that I bought in DC way back in the '90s and never read. It covers the first seventeen years. Remember, they had their 400th in 2007 (as we ought to have seen in Maine, too, due to the Popham venture).

But, the new book being reviewed talked about martial law. Even the 'wheel' was mentioned. So, there will be more on this but, for now, look at this book from 2011 (New Men: Manliness in Early America). Hence, the title of this post.s

Also, consider the Wikipedia page on the time of Sir Thomas Dale. My thought was: now, that is something to be thankful for, that the martial law did not take. Subsequent literature suggested how this may have gone down, including the recent book.

But, the northerners were no angels, either. To wit (only one example), selling American Indian combatants into slavery in the Caribbean. They actually did this, to boot, with Quakers, including children.

So, there will be more on this topic. We have to look at all sides of the story (Thomas and Margaret left us mostly with a tabla raza, except for their children).