These posts may appear irregularly, for awhile; that is due, mainly, to the large amount of material that needs to be read, digested, correlated, counted (the mind has a metrical basis) and such.

Thomas was an early arriver (1623/24); then, the tree for his direct descendant that I'm working on has several hundred New England families in it that were here before 1650. That means that these families have many generations here, too. Fortunately, a lot of these families have researched their history both here and on the other side of the pond.

For Thomas' past, before his arrival (which we'll get to), I am going to consider that James Savage was the most insightful as his family originates from the area that he proposed for Thomas. In fact, some of the trees associated with the Gardner one that I'm working have a Savage somewhere in the line. We will have posts looking backward, hopefully for Margaret, too.

In total in the above-mentioned tree, there are almost 100 families claiming royal descent (Ole's blog, example), some of these are on the NEHGS list. The interplay of the plebian and the aristocratic will be a story that we will have to feature from time to time. One modern analyst made the claim that a source for recent problems can be attributed to aristocratic notions being maintained in England and being brought over here by some.

As mentioned before, Thomas, and his life, can be the foundation for very good discussions that may have a lot to add to understanding the current quandary brought on, for the most part, by those considered to be the 'best and brightest' (give us a break).

Now, to consider this side of paradise, let's go forward from Thomas. Like the Mayflower group, with their list for three generations, we'll start with Thomas' kids and carry this forward a couple of notches as a means to identify gaps.

In the below list, we'll start first with information from Dr Frank's book about spouses and children. There may be pointers to work done already, for some, but only as an example (meaning, of course, to be verified). Also, the pointer may be only to partial information. At some point, the goal is to pull this data together, hopefully with a full tree that includes both genders' offspring. That is, for each generation, fill in the information for all siblings, to the extent possible, of course.

Note: The links for Thomas' grandkids below (bold and larger font) came from the work of Kathleen Hall Boyce who spent 2010 looking at the Gardners.
Remarks:

12/07/2018 -- Dr. Frank and WikiTree. Using his hand-written notes, we filled in his mother's line this past summer. Too, we are going to focus on filling in the gaps.

10/25/2018 -- We have a new look: TGSoc.org. And, we are using WikiTree (example of Samuel/Abel) with the goal of getting the first five generations documented. Some of these links may be stale (will be checking).

04/16/2012 -- Changed link, Samuel. When these databases get updated, pointers change. So, we really need to have a query-based approach. In the meantime, go to 'Index' and enter the name. In this case, it was "Gardner, Thomas" which then brings up the right person. The graph is via Pedigree.

11/28/2010 -- The pedigree for Thomas Gardner (Salem) at the Boyce site changed. So, the link has been removed. Since databases at rootsweb are updated regularly, pages can change. Hence, the procedure might be to do an image capture of the tree, or a portion, with a link to the current tree. That, folks, is one maintenance item that will be required for web-based approaches. This is a type of degradation. Another item removed today was a pointer that was to a local file rather than to a web-based file.

10/29/2010 -- Another thing to look at will be the famous cousin game as it seems to be ubiquitously present; that is, it is found seemingly everywhere that there is a genealogical site. We have already started a list of Thomas' descendants which can be extended as we learn more. Cousins can be extracted from that list. As well, interplays between all of the families brings in another set. So far, I've identified relationships in the tree with 27 of the Presidents of the USA. Then, the list of luminaries is large, many in the arts and sciences. Of course, attainment in some religious sense is represented, too. Then, we have that for which Salem is famous.

Needless to say, and given that Thomas was in Salem early, we'll need to look at the mania of 1692 which, by the way, is apropos to the topic of two generations. We've already shown that [Nathaniel, offspring of] John Hathorne (the main judge) was a descendant of Thomas. And, many of Thomas' descendants have a number of those involved in the Salem area troubles as grands (parents, aunts, and uncles) in their tree.

As we proceed with looking at what is known about Thomas, and Margaret, we'll see lots of different views. These all need to be examined, during which time a collection of unknowns will be gathered.

For the most part, the ensuing bibliography will include pointers to on-line publications, where possible.

We must all be grateful for the organization of Gardner information accomplished by Frank A. Gardner, MD who spent many years on the subject of Thomas' descendants: "Thomas Gardner Planter (Cape Ann 1623-1625, Salem, 1626-1674) and some of his descendants" printed by Higginson Genealogical Books, 1907 (via Google Books). Dr Frank's work will provide the basis for an updated view.


As well, there will be stories from the period. One example would be William Folger's remarks about the sons of Thomas who migrated to Nantucket. These can be found in "Early Settlers of Nantucket Their Associates and Descendants" compiled by Lydia S. Hinchman and printed by J.B. Lippincott Company, 1896 (via Google Books), see Chapter X (image).

Now, in terms of unwindings, there was an article published about the Jamaica Plain (essentially Roxbury) of Boston that we need to look at closely and discuss. The article is on the Jamaica Plain Historical Society site and is dated 1999.

What needs attention is that Thomas of Salem is mentioned, as father of Peter, and his brother, Thomas who settled in Roxbury in the early 1670s. The article mentions Joseph Gardner (to be identified) and John Lowell Gardner who is a descendant of Thomas Gardner of Salem.

Now, 'unwinding' is used as a metaphor for separability. If there is no separation, then the unwinding cannot work. How can we know?

Several personal genealogical sites have the Salem and the Roxbury families intertwined. Was Dr Frank correct in his unwinding?

We can expect that we'll see all sorts of questions arise as we look at these issues. How many there will be, and how many of these we can answer, remains to be determined.

As mentioned earlier, perhaps, there will be DNA-related studies done, at some point, to determine relationships.

10/03/2014 -- Recent find of a marriage record for Thomas Gardner and Margaret Friar in the records of Sherborne.

Posted by AJSwtlk at 1:06 PM No comments:

The problem of 'Where is Thomas?' was asked earlier. Answering that question seemed to be a reasonable task to attempt to accomplish. 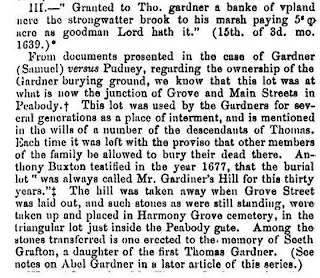 Dr. Frank mentioned a 'Gardner burying ground' (pg 11) that had passed through several hands over the years. One thing of interest might have been following all those transactions using the maps from several points in time.

Dr. Frank said that Thomas was buried on these grounds as was Seeth, his daughter. Too, grandson Abel, and his wife Sarah Porter, were there. It might be of interest to collect other names.

I spoke today, by phone, to the Harmony Grove Cemetery and learned a little about the graves that were in the area of Boston and Grove (in Salem). Dr Frank said Main and Grove, but we know that these types of boundaries move about.

According to Harmony Grove records, the graves were moved, sometime in the 1840s. According to Dr. Frank, this was to allow for Grove to be put in.

After the phone discussion, I remembered that there is an ongoing effort to document grave information to allow internet search. Sure, enough, Thomas is on the list along with Abel and Sarah. Gosh, isn't the Internet great? This seems to be an effort, like Wikipedia, where volunteers put in the information.
We need to find out about Seeth and others who may have been there.

10/01/2010 -- Too, where is Margaret? Also, we need to pinpoint the exact location within the cemetery for these graves, and stones.