TL;DR -- This post discusses upcoming work that will continue to extend our efforts. See the Descendants page for related information that will be kept up to date as we go along.

Our first posts on this subject looked the kids: The kids; Two generations; The progeny; More progeny. These were all in fall of 2010, our first year.

We started looking a progeny in 2009 and published on Wikipedia starting in January of 2010. The first persons mentioned were Augustus Peabody Gardner and John Lowell Gardner, as they were both in Dr. Frank's books (mentioned in 1907 and featured in the 1933) and had pages on Wikipedia. We can see the pages from those early times due to Wikipedia's very professional change tracking. 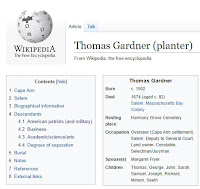 This is a link shows the first draft of the page (January 10, 2010) which has gone through a long series of revisions since then and has a stack of pending edits waiting to be done. Such as, Wikipedia does not see Dr. Frank's book as a proper reference source. So, we are slowly working to remove that failing. Remember, Wikipedia is an encyclopedia.

Within a couple of weeks of that start, we had created some sections to categorize various descendants. Overall, we found good sources but have removed some people. One example was General Worth for whom Fort Worth, TX is named. His mother was the second wife. The categories on the Wikipedia page for Thomas Gardner (Planter) were the following:

These have now been brought over to a post for each child where we will start to fill in the tree: Thomas, George, Richard, John, Sarah (Gardner) Balch,Samuel, **, Miriam (Gardner) Hill, Seeth (Gardner) Grafton  ** Joseph (had no descendants).
Now, with respect to how we can work the details, there have been many who have researched their families. Lots of different alternatives are available for this type of work, and the material is across lots of frameworks. We might ask for a summary which then points to details. Say, some ancestry tree's nodes being written out (link targets would need to be publicly readable). One goal is to find holes where we can focus research.
Remarks: Modified: 11/10/2020
10/27/2020 -- We will be helping to update the Thomas Gardner profile on WikiTree.
Posted by AJSwtlk at 1:00 PM

Email ThisBlogThis!Share to TwitterShare to FacebookShare to Pinterest
Labels: Descendants