Filters, and their use

Earlier, we looked at an approach to working pedigrees back 400 years, briefly, and titled a post - Middle and out. This will all be discussed further, but everything of note has a top and bottom. Implied is a middle. Why? We talk top-down for those things from that position. Ever heard of an executive being operationally effective? And, from the bottom, we find the detail orientation. Does the top care of this? Or even have the ability to know?

So, we tread that water going as high as anyone wants and as low as is possible (and be sane ;>). Take science. One might say that theory is top-down. Yes. Data, experimenting, et al are bottom-up affairs. Same goes for any discipline, including genealogy. And, we think that the 'lead feet' observation really denotes lack of appreciation of the applied aspects (even mathematics has this). So, to cut this short as it'll be addressed time and again, we look at how 'filters' come into play.

Aside: some wag might use 'colored glasses' or some other label related to interpretation. We say hermeneutics gets too much short shrift. Okay? 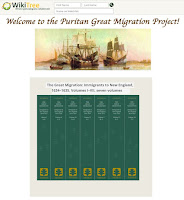 We have started our look at descendants of Thomas and Margaret (Friar) Gardner. This work will focus on the progeny of each child and will report through various media and schemes. For some, we will use WikiTree if there are collateral families that have already done work. We have been creating profiles, as needed, but that is not necessary. Actually, it might bog down the work since text files would be sufficient, though we will consider a few other formats.

Aside: On Margaret, a family in Sherborne, Dorset, England has our attention as being Margaret's, for several reasons. So, they used Friar. Felt used Fryer. Some have used Frier. So, we'll use any and all; however, right now, we'll go with what the Brits wrote over 400 years ago.

The key is that we need sources specified from which we can grade the information. The rating will go from verified to speculative with the latter not being shunned. Rather, we want to fill in the first five generations completely and work down to around 1900. Hopefully, we would have mostly strong referencing done, but we will not shy from using modern techniques, that are sound.

Somewhat, DAR provides examples. It has been at this for over 100 years and has an on-line database. A recent post looks at “Middle out” where information is available. And, we can confirm that this information was provided with source references. We also know that the process will mark information needing attention, rather than throw it out.

So, take a line, such as that of Dr. Frank’s sister, Lucie M. Gardner (public search is available). Her record stops at the 2nd great-grandson of Thomas and Margaret through their son, Samuel who is #6 in Dr. Frank’s 1907 book. This Patriot's name is Simon Stacey Gardner. His line goes (Thomas, Samuel, Abel, Abel, Simon Stacey, ..., then, we have Jonathan, Benjamin Brown, Stephen Wilson --- all Gardners, with the last one being Lucie's father). So, taking that example, someone wanting to show their pedigree to T&M would only need to reference that database node and how they relate to it. Lucie and Dr. Frank had no other siblings. Lucie had no offspring, but Dr. Frank did. However, for cousins of those two, there are many not in this database. We'll take one or two as an example and see how this might go.

Relate? Yes, if some member of the organization has a sister who has not been identified through an application or a brother, then one would merely need to show that relationship (of the siblings). It would be that easy. Now, the database might have 7M persons, however there are lots of holes. Take the Massachusetts listing of sailors and soldiers. It is 17 volumes. Many of these people are not known to these types of organizations which has provisions to prove new Patriots. Ann herself has a slew of Patriots not in the database; yes, there are some who have had applications under their name. Rather than go through that process, we might use the method that we're experimenting with to have some  minimal representation so that people can fill in their lines. Even the WikiTree Profile seems excessive. We'll have to see.

Aside: we'll not get to where everyone is in one database. It's like everyone in the same country or at the same point on earth (like the U.S.). We can, though, think of interchange mechanisms that would help. And, what genealogists do is not what I'm thinking. Actually, we'll use Julia to prototype something akin (or, let's say, inspired by) the semantic web team's effort.

Besides descendants of T&M, we have an interest in all of the families that were at Cape Ann when T&M were there (arrival 1623/24). We already know some of the persons and their families. For instance, T&M's daughter Sarah married John Balch who came with his wife with the Cape Ann crew (according to some, same boat). There may have been (is) some disagreement about who was actually there, but we’ll be inclusive for now in the interest of helping research go forward.

Another motivation is that the 400th anniversary of the arrival is coming up whether 1623 or 1624. Despite that, as we see with the Great Migration Project, there were entrants by the ton until around 1640. We can attest that we see lots and lots of people not covered in WikiTree, hence the decision to not use that as a funnel.

Good old HTML can work once we set up the format, for a while (see Julia mentions that will be cropping up - just determined this due to watching a mathematical physics team use it successfully for non-trivial computing). In time, we will settle on a technical approach for the future. Lots of options exist including doing our own with links to the other resources. That is, a type of overlay from TGS via some service would be where TGS provides an independent access (see colored glasses, above).

Now, back to filters. There are several example such as those involved with the Revolution. The Mayflower society will be another, though their records are in digitized book form. There are a few others related to New England, however we need to look further as people dropped off at Barbados, for instance, and went to several locations along the eastern coast of the US. Of course, Virginia needs attention. Nathaniel Eaton is an example of this. Who? First head of Harvard who was completely misunderstood.

Too, though, we need to look at Loyalists who are of the period the the Patriots. We have started a list of those.

Oh yes, in 2014, we had a discussion under the auspices of the Hereditary Society Community about a database for the first four generations. That is, from the applicant back. Too much personal data gets copied and scattered about. We only need one source that has the proper configuration. We were thinking that the far-out view was too political. Well, not. Taking some point, like 1620 to 1640 (think the NEHGS Great Migration Project), we could provide a good database that covers a couple of generations each way. GMP had a span of two generations (one on each side). Whatever. We have plenty to do, otherwise. Yet this thinking is to help us understand what services are being ignored; there is where you will find us.