How to handle the frontiers

TL;DR -- A cousin went west, during the wild times, and returned only to become a causality at Antietam.

As we work to fill in family information from Thomas and Margaret until around 1900, we will be using WikiTree to map out genealogical relationships with supporting material coming from various web sources that can be trusted. That will be a many-pronged task, as we need to have some guidelines to follow which will differ by context. For now, as an example of the good work of DAR, we can point to some public information that would be pertinent, such as their guidelines, their effort at having a database, and such. A good place to start would be this document (Genealogy Guidelines, Part Two) starting at Page 24 where there is a discussion of forms of documentation. Then, we have the job of looking at all the persons of every generation.

Let's take an example. On WikiTree's Profile for Samuel Gardner, earlier this week, we saw that Neville Chamberlain was a descendant of Thomas and Margaret. Now, earlier items on the list in this post (Descendants of Samuel) had been looked at years ago (we're finally getting to this work). However, this new one looked interesting and was added to the list without any attribution. That is how work happens, in an incremental fashion, hopefully with notes to do traces and such. We didn't bother as we knew that this post was coming along. As well, we added the name since the list is smaller than for Samuel's siblings. But, we're of Samuel and thought that we would do the others first. Only two more to go (Miriam and Seeth) before getting into details. Which this post is about.

Well, after a quick look in order to prove that line from Thomas to Neville, we could not. BTW, Neville was the Prime Minster of England prior to Winston Churchill. Not too fantastic, as we can show several modern lines in England that map back to colonial families. We'll have a post on that later.

Fortunately, we do have Dr. Frank's works. So, we started down through Samuel's (which goes #6 to #59 to ...). And, we saw Elizabeth (Gardner) Gardner. She is of George, and her husband was of Samuel (both generation 2). That post on her was done in December 2019. One of her sons was mentioned by Rev. Bentley. But, let's take it a little forward. Her daughter married a Barton. Then, their daughter married a Derby who was a Crowninshield, too. His mother was an Elizabeth, too (look at December 2019 and see a few Elizabeths in focus - but, early this year, remember, the virus happened - besides, we got off on this work of supporting the organization which took a lot of time and energy - from which we learned a few things about how to argue on these issues - which we first brought up in the context of the Hereditary Society Community - so, lots of pending things to do).

So, we get to a great-grandson of Elizabeth (through her daughter, Margaret, and granddaughter, Sally). His name is Richard Crowninshield Derby who died young at Antietam. Here is his findagrave profile. And, this is a snap of his WikiTree profile. 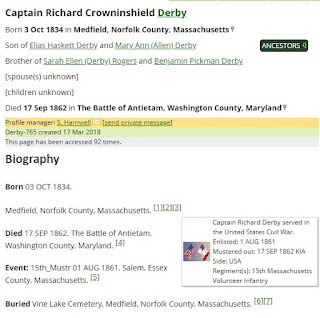 Richard is seven generations from Thomas, so that is right along with the partitioning that we were talking about with the 5th generation bearing the brunt of the Revolution. As an aside, doing this work, we were heavy into the movements south and west where documentation lagged the people's lives. Lots and lots of times. We'll go on about this until we see better handling. That is, the wilderness of those areas just west of the coast had a whole different dynamic than the frontier (of several sorts) experience which went on for decades (and decades). Yes, that'll be our little focus (people's essence is not necessitated on their having papers - sheesh).

Now, in this case, given that Dr. Frank was of Samuel, we can somewhat take his work as given. Except not, we're on the record as noting that we need to verify Dr. Frank's work. I have already done this with his direct line and that of his mother (1907 Chart, from May of 2018 - we might be slow, but we are thorough - hence, in a few months, we did (as in, got okayed) a handful of new applications plus ten supplementals - there will be more on this later).

As said, we'll use WikiTree until we find a better approach. One truth of the matter? This stuff takes work which we have been doing for a decade now. To date, the thrust has been the overview and discovering what has been done for a century and one half. We are in the process of closing up that work and starting to get into more detail in a mode that will be sustainable (as much as we see with the organization and their 125 years or the NEHGS with their 175). Does ten years make us newbies? Not really, as research has been my career focus, so we're talking 1/2 a century (John's gift to the Gardners).

BTW, John has been digging into the theory of computing (and other things considered theoretical) and will be doing little experiments using our portal. Anyone interested in technology who can adopt and keep independent viewpoints is welcomed to help. Or, just doing drudge work. Computing has that at its core (nothing sexy at all - that's all hype).

Going back to Richard, he was born in MA in 1834. That 30 years after Lewis and Clark and a few years post Daniel Boone getting to eastern MO. Then, Richard was out in WI and MN. So, that's above IL and MO. You see the timing. At the same time, though, we saw the frontier line going west (KS, NE, OK, and TX - can't forget the upper people, DKs).

In our little case against the GSMD, Chloe is of the latter part of this generation.