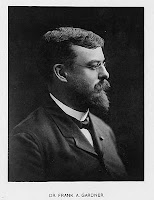 Finally got around to filling in Dr. Frank's tree, using WikiTree. His Gardner line is fairly complete, in terms of data entry. Starting to fill in his Woods (maternal) line using Dr. Frank's handwritten notes. The focus now for this work is having nodes (profiles) in place and linked (pick the Ancestors button). Then, we'll be adding bios, etc., plus verifying sources, as in, this will be the 'bible' of his lineage. We fill in sources as we go along adding profiles - to be extended later with further research by Gardner Research. However, we don't own all of the profiles, so we need to double check those. So far, finding interesting stuff, like - Dr. Frank is a descendant of Demaris, too, the last wife of Thomas.

Link to on-line versions of Dr. Frank's books and some of his publications:
1907 edition, 1933 edition
The Massachusetts Magazine

Gardner pedigree for Dr. Frank and his sister, Lucie M. (with ahnentafels of their grandfather, Benjamin Brown Gardner, and grandmother, Lucy FosterWilson).

Several posts have mentioned Dr Frank A. We will use his line quite often as we fill in the tree.

Dr Frank's book is now available via the Internet Archive in several readable forms, including PDF. Here is the link:
The 'Read online' option provides a nice interface that has a fast search; the results are given with easy to use bookmarks. See next, for an example.

Fortunately for us, this book provides sources which is important for resolution of questions. In many cases, records are missing for a variety of reasons in many areas. Essex County seems to have been able to preserve a lot of their records.

The Gardner families were spread widely, according to the book. It will be interesting to see the locations mapped out as they were at the time of the book and at this later time.

11/11/2019 -- Got Dr. Frank's FindAGrave profile updated: Frank Augustine Gardner, Veteran's Day. Early, we had pointed to Harmony Grove Cemetery, but the Gardner / Dennett plot in which Dr. Frank's ashes were interned in in Greenlawn.

05/01/2019 -- Saw notes by Stephen Wilson Gardner in his personally signed copy of the 1907 book. SWG was the father of Dr. Frank. For the first time, saw the plate that had been reproduced. On further research, found a color copy. The area is significant in that it's near Gardner Hill. Looking for other material that has something to offer about the area.

09/15/2018 -- Gardner Research published four articles in The Essex Genealogist. These were republished in The Gardner Annals which just released Vol. IV. Last fall, we printed TGA Vols I and II. Soon, we will print Vols III and IV. Included with the TGA were Gardner's Beacon issues. Of late, we have experimented with one approach to a database, namely WikiTree using Dr. Frank's information. As mentioned in that post, we have established that Thomas had two wives as we found information about the marriage of Thomas and Margaret in Sherborne, Dorset, UK.

05/21/2105 -- We will feature Dr. Frank in our research. For now, we have the ahnentafels (fully sourced) for his paternal grandparents. One of his activities was editing and promoting The Massachusetts Magazine.

02/27/2015 -- Dr. Frank's paternal ancestry completed. Turns out that Dr. Frank is a descendant of Nathaniel Eaton. Being degreed in the theological framework, as well as having the M.D. and a general Ph.D., puts him in a different light, one might think.

10/03/2014 -- Dr. Frank A. will feature in the future. Was he right about Thomas and Margaret (their marriage record found, recently)? Why did the Great Migration Project ignore him?

12/24/2012 -- Thomas, unlike Conant, was not overshadowed in the world of being. We'll spend some time characterizing this fact and what it means to reasonable folks.

05/08/2011 -- The image is from page 74 of Dr Frank's book where he mentions notes for a future book. It would be interesting to see these notes. Where might they be?