The Gardner Annals, Vol II No 2

This post introduces the fourth issue of The Gardner Annals (Volume II, Number 2). This issue concludes the look at the life, and Gardner ancestry, of Frank A. Gardner, M.D. Included are ahnentafel charts (sourced) for his paternal grandparents.

Research continues on The Massachusetts Magazine. Also, there is a brief review of a recent book, Through One Family's Eyes.

The Gardner Annals supports the interests of the Thomas Gardner Society, Inc.'s purpose: to honor the accomplishments of the Cape Ann party and to promote, and to sponsor, scholarly research of a cultural, biographical, historical, and genealogical nature, with an emphasis on, but not limited to, the origins and the lives of New England immigrants.

Posted by AJSwtlk at 8:45 AM No comments:

Nantucket has played a major role in several areas. Gardner is one of the original (1/2 so) families.

With the recent release of Ron Howard's movie, a few links to related detail might be in order. The book that motivated the movie can be browsed via Google.


In the Heart of the Sea: The Tragedy of the Whaleship Essex (2000) Nathaniel Philbrick 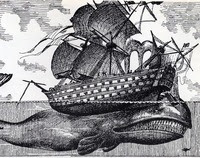 George Pollard, the captain, of the Essex was a Thomas Gardner descendant as were, probably, a lot of the crew. George's experience was an inspiration for Melville's Moby Dick.

The next ship commanded by the captain, the Two Brothers, had Eben Gardner as 1st Mate.

The Smithsonian Magazine had an article, recently: How Nantucket Came to Be the Whaling Capital of the World.

12/22/2015 -- While researching for additional material concerning the book (see review in Article III of The Gardner Annals, Vol. II, No. 2), I ran across the child actors who were in Moby Dick with John Barrymore. Jay Berger was the nephew of one of the in-laws mentioned in the book. These types of circles make for interesting stories and can be found everywhere.

This fall, I saw that the findagrave.com page for a relative was wrong: not the right parents, etc. I got the information corrected by sending a note to the person who originally created in the page. This person ought to be commended for doing thousands of graves. In this case, the changes were made in short order as I had supporting material. Since then, I have several other requests pending.

Now, families need to step up and monitor the grave pages for those they know or care about. One can ask to have the findagrave record moved to one's control. Hopefully, we can collect the Gardner ones together for easy maintenance of the information.

So, let's start with Frank. A. Gardner (the Gardner author). The page is to be maintained by the Thomas Gardner Society, Inc. Notice that I have his death date which was not noted in the TEG and TGA articles on his grandparents. I found this date via Greenlawn Cemetery records where Dr. Frank is buried in lot 384-300.

In that large lot in Greenlawn are Dr. Frank's wife and daughter. Also, we find Ann's great-grandparents, grandparents, and several aunts, uncles, and cousins. Also, there are several in-laws.

The lot was bought by Joseph G. Dennett in 1880 when his wife died; he was buried there 1882. Ann's great-grandfather, Joseph D. Gardner, bought the lot in 1898. The latest burial was 1973; there are several open graves.

We have mentioned the cemetery several times, as Thomas Gardner, Sr. was moved there in the 1840s. Where Thomas is remains an open question.

11/10/2019 -- Changed Harmony Grove to Greenlawn per information from Mark Stevens of Salem, MA.

11/11/2019 -- Removed old image that referenced Harmony Grove. We now have 17 Memorials which are profiles for which we are owner. We will have many more.

The second issue of this volume is under preparation. One article will be a review of Susan Hollingworth's book: Through One Family's Eyes.

It is about the half of my family which left Ireland in the mid-1800s. The Irish siblings ended up in the U. S. and in Australia. Additionally, there is information about related colonial families.

As well, we will be looking at Dr. Frank and his work in order to complete the research effort that has been ongoing. With Dr. Frank being used to represent Samuel, we would like to feature a descendant of each of the other children of Thomas and Margaret from about the same time frame  (born late 1800s).

Posted by AJSwtlk at 6:43 AM No comments:

Below, we consider that Thomas was not with Margaret and their sons during the Christmas season in 1623.  That he was with the Cape Ann crew that winter ought to be brought to the fore.

While researching her book (c1930) on John White, Founder of Massachusetts (An Uncle?), Frances Rose-Troup did an exhaustive study and biography. She, subsequently, published details in her book on the Massachusetts Bay Company and mentioned that "a few men being left there as early as 1623 by the fleet send out by the Western Merchants." Further, she said that these men met, the next spring, the Zouch Phoenix and other ships.

In his 1935 book, Dr. Frank gave a listing of the passengers in 1624 (Zouch Phoenix). These were the names with the Gardner party.

Larry Gardiner of Minnesota who is a descendant of Thomas Gardner of Salem through son, Richard Gardner of Nantucket, recently offered his thoughts on this, and a related, issue. We present Larry's remarks (consider these to be conjectural) here and will add commentary at some future point.


Francis Rose-Troup states the Dorchester Co. sent the ship "Fellowship" in the summer of 1623 to Cape Ann. Fourteen men were left at Cape Ann, and the ship returned to England. Thomas Gardner, the man in charge, would most likely be one of the 14 men left at Cape Ann.

The ship "Zouch Phoenix" arrived at Cape Ann in the Spring of 1624. Among the passengers listed were: Thomas Gardner, Mrs. Gardner, George, Richard and Joseph. My theory is the father is already at Cape Ann. The passengers are Thomas (the oldest son age 6), Mrs. Gardner (the mother & wife), George (the 2nd son age 4), Richard (the 3rd son age 3) and Joseph Gardner (an adult relative that accompanied the mother and children to Cape Ann, and then he returned to England).

As for John, the 4th son, born in 1624, the mother/wife was pregnant during the trip, and John was born at Cape Ann. From Thomas leaving in the Summer of 1623 to the Spring of 1624 - just under 9 months(?). This would solve the names of passengers.

By the time the 5th son Samuel was born in 1627, the family had moved to Naumkeag (Salem).

So, who was this Joseph Gardner that came with the family? Larry continued. Again, we will comment later.


My theory on Rachel is the following. Thomas was the oldest child of (Thomas & Elizabeth White) if those were his parents. His brother Joseph was next, and he accompanied Thomas' family in 1624 - age abt. 23. Rachel was the 3rd child born abt. 1608. If she came to America at age 18, it could have been abt. 1626. She lived with brother Thomas in Salem. Married Mr. Noble in America. Their parents (Thomas & Elizabeth) have more children born in England. By the time all the children are old enough to travel to America, it would be 1626 plus. Rachel may have been the oldest child of the family on the ship. The father died in 1635 abt. 70 years old. The wife Elizabeth returned to England with remaining children. Rachel was abt. 27 years old and married.

This would set up a rough timeline to explain that Thomas & Elizabeth did come to America, and that Thomas was buried in Salem. All of the family returns to England except Rachel who got married.

Thank you to Larry for offering his insights.

We have mentioned Rachel, as a possible sister of Thomas, before. The subject is definitely on our list of items to resolve. As well, there was an older Thomas Gardner who died in Salem early (1635). Has his identity been settled?

One question to answer would be when the great house (that which caught Endicott's eyes) went up (1623?, 1624?). If the former, did help the first winter?

Also, the Plymouth folks had been using the Cape Ann area. We will mention the incident (1625) that brought Conant's fame of preventing someone from thumping Standish on the head. Thomas was not a participant; it would be good to hear his opinion. So, he was there two years before Roger's arrival with Lyford and crew.

While researching, recently, I ran across a site devoted to Winston Churchill. There is a lot of the interest concerning his American side, through his mother, Jennie Jerome of Brooklyn. For me, their interest demonstrates that the families need to weigh in on this type of research.