We had our first print of the TGA, last year, when we did Volumes I and II (in black and white) with the first three Volumes of Gardner's Beacon.

We are finalizing the latest issue of The Gardner Annals which will be Volume IV, Number 1. As soon as we are done with that, we will prepare to print Volumes III and IV of the TGA.   We will do the next printing in color. Too, if there is interest, we can reprint Vols I and II in color.

As a reminder, the following is the Table of Contents for TGA, Vol III. With TGA Vol III and Vol IV, we will include issues from Volumes IV through VII of Gardner's Beacon. 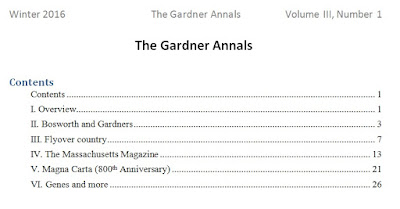 In Vol. IV, we carry forward two of the articles. "Thomas Gardner and the Tudors" is an extension of "Bosworth and Gardners" which is being done by David T. Gardner of the Pennsylvania family. Then, we look at the remainder of the volumes of The Massachusetts Magazine that was published by Dr. Frank and friends from 1908 to 1918. A new subject article looks at a correction made to The Essex Genealogist which led to several articles from Gardner Research. Finally, we briefly look at current research that will be published in future issues: a continuation of the "Flyover country" work about the lonely grave of a Mayflower descendant out west (who cares? when there is partying going on back in Plymouth?), then we take a look at the founders of The Atlantic which started in Boston, of course, we look further at the Magna Carta, and take some time to refresh what is known about Nathaniel Eaton which the proviso that we will get the record filled out further (he is an ancestor of Dr. Frank).

In terms of The Massachusetts Magazine, for which we will publish the Table of Contents the remaining issues, here are some particulars to be dealt with.
From looking at magazines of the time, we learned about the dialog (yes) related to various parts of U.S. history that ought to be known. And, we found out about the Lyceum movement of the early 1800s. The impact was seen even out in Kansas (1890s). We will take time to look at various attempts, such as the Spirit of '76 that was adopted by S.A.R. yet failed.

Gardner research interests are varied. One of these would be doing the first five or so generations for each of the children. Now, how to get that further along?


06/18/2018 -- The Gardner Annals, Volume IV, Number 1,  published. Contents: The Massachusetts Magazine,  updating an article in the Essex Genealogist, Gardner and the Tudors, and Pending Research: Pseudo-wall, The Atlantic, Nathaniel Eaton.

Posted by AJSwtlk at 5:20 PM No comments:

Dr. Frank took the time to fill in his ancestral chart using a approach patented by Rev. F.W. Bailey. So, we have an early 1900s analog of a printout from one of the modern apps. And, it is in his hand. I checked what he had against what I found out in my research. We agree. I just have access to more information, due to technology.

Nowadays, we can work from our desk whereas he had to travel and thumb through documents, many times. We have access to books that were being written in his time, albeit many of these are not worth much. Alas. Dr. Frank may have known several of these authors and have known their results. But, his efforts were contained to work in New England. The 1907 book dealt mainly with the family of Samuel.

These are the main pages of the book that Dr. Frank filled in. Following are the ahnentafels for his Gardner grandparents. We will prepare these for his mother's side.

Again, one reason for starting with Dr. Frank was to leverage off of his work. In his 1907 book, we had the children and grandchildren for the other children of Thomas and Margaret. We really need something that pulls together the first three or four generations.

I propose using The Gardner Annals. We will be printing Volumes III and IV, soon. There is still time to offer something. An ahnentafel is easy to write.

Aside, Dr. Frank does include Anna Eaton. So, he knew. This subject will be further researched. That is, Dr. Frank and his cousins being descendant of Nathaniel Eaton. Yes, a story that needs a relook. Looks like fun.

It might be of interest to know that we intend to cover the Sir Christopher Gardner story, to boot.


09/07/2018 -- Finally got around to filling in Dr. Frank's tree, using WikiTree. His Gardner line is fairly complete, in terms of data entry. Starting to fill in his Woods (maternal) line using Dr. Frank's handwritten notes. The focus now for this work is having nodes (profiles) in place and linked. Then, we'll add bios, etc., plus verify sources (as in, this will be the 'bible' of his lineage - we fill in sources as we go - to be extended later with further research by Gardner Research). Finding interesting stuff: Dr. Frank is a descendant of Demaris, too, the last wife of Thomas.

03/14/2019 -- On WikiTree, added information about Dr. Frank's first wife: Caroline Louisa Read who was the daughter of John Franklin Read and Caroline Louisa Chase. Changed burial for Pauline Gardner Donnell, his daughter, to Newcastle, ME.