Last year, about this time, we had a diversion to Charles Olson. He was the Gloucester poet. Also, in that same post, we mentioned paleoichnology. These themes concern relating to prior times.

Of late, I ran across Alberto Rios. One (The Who That I Am) of his poems struck several chords. I have attached an image, from Mesa Arts Center. 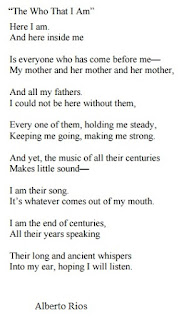 For a couple of months, I have used Quora. It has a question/answer format (see examples). I need to collect those answers related to New England history and other TGS interests. Several times, I have seen answers that were lifted from elsewhere on the web, with no attribution. That type of copying seems to be taken as okay, as if plagiarism is the norm and acceptable.

Yet, one has to think that some type of structure could be built there. Wikipedia has a policy of no original research. Quora does not have that NOR restriction. They do have the neutral tone policy which is not hard to adopt.

Posted by AJSwtlk at 1:08 PM No comments:

As we dig for ancestors, we can think about lots of things, of which numbers (example) is one. How many ancestors do we have and how many can we identify?

We know that intermarriage between families reduces the number since an ancestor will appear in more than one part of the tree. So, how common is that situation? Using Dr. Frank, in one of his ahnentafels, there is no duplication until the immigration time.

These types  of question has been posed many times. And, they have been looked at in various ways. Of interest is a 1978 paper by Kenneth Wachter, titled "Ancestors at the Norman Conquest." This paper has been referenced in a lot of subsequent work. Too, we find statisticians and others weighing in.

I ran across this question on Quora: For most of us, how far back in time do we have to go before we no longer have unique ancestors in every generation? There are several answers. One was given by David Joyce who does genealogy well. I have run across his work several times and considers those who have colonial ancestors.

There was a book in 2002 by Steve Olson, titled "Mapping Human History" (USA Today story) in which he discusses a common ancestor for all of us. We have all heard of Lucy. But, is there one closer in time? Olson claims that around 1,200 years back we could find an ancestor who appears multiple times (as in, 1000s of times) in our tree.

Using the generational count, we could figure that there are a trillion people on the tree. At at time, there were 200 million on Earth. So, we know that each person, if they had children, would appear multiple times. But, many did not have children. Too, many had lines that died out long before we got to the present.

There are many more studies that we could discuss. But, in terms of Thomas, we do not know his ancestors, yet. Our goal is to find out who they are.

We are looking to build some knowledge about Thomas using Quora. But, more, we hope to fill in information through this type of crowd sourcing.

Posted by AJSwtlk at 5:11 PM No comments: