Our first post was in September 2010. We didn't know much about the subject matter. But, after doing a few searches of the web, at the time, it seemed clear that Thomas and Margaret (Fryer) Gardner needed more attention. Every year, we have done a summary of posts for the year, using an image that showed the most read of the posts. Unfortunately, we forgot to do one at the end of 2017. We did one for the other blog: Henry Lunt of Newbury.

So, with the idea of its better sooner than later (many times), we present this graphic with some commentary. 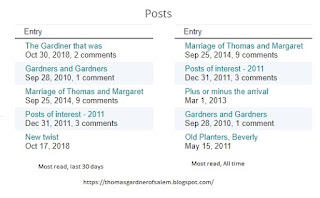 Many times, the top entry is the same for the 30-day and the All-time views. However, today's counts have the top of the All time (Marriage of Thomas and Margaret) pushed to third in the short term. BTW, for an update, see this post (Margaret anew) in which we address the issue of Margaret as the mother of the Gardner children.  The new post (The Gardiner that was) at the top deals with a bit of research that covers several topics and has been an interesting introduction to things not considered before.

Its theme goes with the 'All things Gardner' focus that has New England as the center from which the American experience expanded. If one allows that Virginia, and it surrounds, was New England, then that does cover the majority of the case. As we have also touched, and will continue to do so, on the American Indian experience, that of the southeast and the west, principally the Spanish territory. We got acquainted with the sea-based life of the time. As usual, more general things come to fore, such as there being a social media even then. It was wind-driven and ought to give us an endless amount of research topics.

Two posts of long-standing interest are still there. Gardners and Gardners was an early effort to identify Gardner families starting with the work of Dr. Frank and continuing with new information as we heard from other Gardners. There have been many queries as to relationship with Thomas, as well as trying to determine information about other Gardner/Gardiner immigrants. This experience is one motive for the "All things Gardner" research effort. The other post (Post of interest - 2011) was our first summary post, as that was our first full year of blogging.

As well, this year, our recap will include a table of posts by month for each year.

Now, the final new post (New twist) summarizes the running down of the location of Thomas' remains. Say, why? Due to the time of the year, we see people visiting graves of their ancestors. Too, Salem is planning to upgrade it Charter Street Cemetery. Well, the NEHGS has a book of cemeteries of Massachusetts. Does it mention Gardner Burial Ground? Need to find out. 'findagrave[.]com' does now. It is titled 'defunct' for now; we'll get it on the map and more. Say, build a 3D model of what the area might have looked like in Thomas' time. We ought to get a list of the names of those interned there; after that, determine the status of each of these. We just barely scratched the surface.

Thanks for reading the blog concerning Thomas Gardner and early New England; too, we are to show how all of this is still pertinent.

Operations involve lots of things, some of which are transactions. And, transactions are not just monetary. From the beginning, we have looked at our efforts as being a way to demonstrate examples of how to do things. Granted, this might be considered academic, but it is not. We will be discussing how some of the forward-oriented sites are moving to a better groove than we have seen, generally, to be the case. Much to discuss.

This post (CMS and more) and its predecessors discuss some of the issues. Our theme is Culture, History, Technology with a model focused on the particularities associated with Thomas and Margaret (Fryer) Gardner with respect to all aspects through time. In short, the American dream from its inception.

So, we are at a crossroad, decision point. Our early work was research oriented with the intent of regular publishing. We have started the print part with two printed volumes of The Gardner Annals. There is a lot more to do which needs regular work and support. There are many ways to accomplish this, however some choices are pending. These will not be made without a study of what has gone down the past 20 to 10 years. The first? Commerce on the internet. The second, Job's gift and its perturbations of social norms. Yes, the analysis of norms will go way back to the beginning (400 years) and beyond.

This type of work does involve genealogy and family. We started at first using manually written ahnentafels with an accompanying essay. However, the work on WikiTree shows how we could proceed using tools; frankly, it is an impressive environment compared to some looked at over the years. It was through means of wikitree that we settled the issues with Margaret as the 1st wife of two. The matter is still open to discussion. BTW, the index at TGSoc.org has generated traffic as it points back to the blog; there is a lot more to do.

The improvements that we need will be managed according to safe, mature, smart and other preferred modes of operations. If we pick up off the shelf, it'll be warily. Quite frankly, it ought to be fun to do our own thing. I see plenty of examples of people waking up to the need to scale down the . For us, we're looking at 'truth engineering' which is much apropos to what the TGS has taken as a goal. Members? We want to resurrect the Old Planters Society, that is, the one whose voice was The Massachusetts Magazine. As an aside, it's scope was anything outside of the Plymouth region, with Massachusetts as key, of course.

There are many options. Some have been explored. All of this is being blogged. However, in the meantime, we will continue with at a snail pace, until we put into place an improved process (I like the approach taken by Phi Kappa Phi - see Donate and On-line Store buttons on the banner). But, it was interesting to see The JSS still using checks in the snail mail.

We will soon put out an order form for the printed volumes. The only thing missing will be the address which is attainable via email.

Aside, anyone interested in technology is welcomed to jump in. Let us hear from you.

Posted by AJSwtlk at 5:55 AM No comments: