Since Thomas and Margaret came from England, as did many of the collateral families, we ought to collect some links related to English history. Some may have more comments than others. At some point, a bibliography will appear.

These are interesting to the themes of the blog, for many reasons, so expect some posts on these types of things from time to time.

07/20/2013 -- Interesting work, and related database, at PASE.uk, including a database built upon the Domesday Book (can identify old families).

Posted by AJSwtlk at 9:47 AM No comments:

Where is Thomas? II 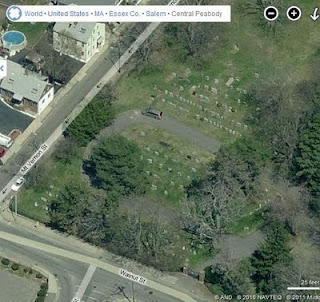 Earlier we asked and, partly answered, the question: Where is Thomas?

His remains were moved to this area, in Salem. Perhaps, we can be more specific, at some point.

The area depicted is in the Harmony Grove Cemetery near the gate that opens into Peabody. Several graves were moved over when Salem built up the area of Boston and Grove (Bing map).

Today, the first newsletter was published at the Thomas Gardner Society site. It has the title of Gardner's Beacon.

Vol. I, No. 1 has an overview of Thomas' and Margaret's lives in Cape Ann and in Salem. There is a list of the children who will be featured in future articles.

This issue is the beginning of a long series, we hope, that will allow a more permanent, and printable, presentation of information about Thomas and his life. Summaries of articles will continue to be found on the blog.

We are inviting contributions of articles in regard to the topics. At some point, an issue will be devoted to a bibliography related to Thomas, Margaret, and their descendants which will be kept updated.

Winthrop wanted his 'city on the hill' established here as a theocracy. We expect that Thomas Gardner will continue to be the shining light (beacon) across generations.
GB I, 1 (PDF w/links)

As mentioned in this Wiki article, there are many types of 'old planters' that are worthy of attention. In New England, an early Maine group was particularly effective: came very early (into Popham), established a colony, and built a boat (Virginia) that was seaworthy sufficiently to cross the Atlantic several times. There are more examples. Time lines (Wiki article) show several settlements in the Massachusetts area prior to 1630.

In particular, we might ask about the Dorchester group that came in under Thomas Gardner and John Tilly, in 1623/24. For this, we can collect, and comment on, reports related to the topic. As a reminder, let's use The Winthrop Society's list of names (1623-27, where is Tylly?).

We can find some reports that do not reference Thomas Gardner, such as this one -- Woodbury family's book (in the context of old planters, four are named): Hubbard is precise that Mr. White solicited Conant, Woodbury, Balch and Palfrey because of their character, to undertake a new settlement at Nahumkeag, promising them men, goods and supplies, a commendation sustained by his associates. Neither did Mr. White reference Thomas in his Plea.

Now, we do find later references to Thomas, such as that of Rev. Hubbard who had talked, it is believed, to all of the principals and such as this 1869 Bulletin (George D. Phippen) of the Essex Institute. Felt's look at Salem has many references.

There was an Old Planters Society concurrent with the attention brought by the 300th celebration. The group seemed to have met regularly (meeting notice June 28, 1905 -- Dr Frank A. in attendance). Lucie M. Gardner (Dr Frank A's sister) wrote this report (notice the mention of pre-1630 for membership) for the Massachusetts Magazine.

Remarks:
03/19/2022 -- Nice to see research on the family of John Tilly. NEHGR, Winter, 2022 has an article on John and his family by Clifford L. Stott. The title is "Rev. William Tilley of Broadwindsor, Dorset, and His Sons in New England: John, Nathaniel, and William." Identifies his child and more. 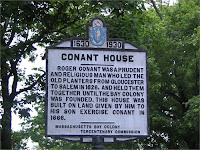 06/15/2013 -- John Farmer wrote that Thomas was from Scotland. Origins are, and will be, a focus. ... As of today, Historical genealogy is the all-time, most-read post. Coming in second is Old Planters, Beverly.

05/01/2012 -- Will pull together sketches for those on the list. John Tylly has been mentioned, in brief. We'll try to find more about John (no offspring?). There is a lot of material about Woodbury, Conant, and Balch. I have seen some things about Norman and Allen, who both had offspring. It'll be interesting to read about the rest. Of course, verifying this list (or, at least, justifying it) is one necessary task.

05/01/2012 -- Backbone, in particular, this overview. Two things to be thankful for: Rev Hubbard's look back (his brief mention is sufficient) and the fact that the manuscript was not lost (otherwise, would Thomas had been even more unknown?).

04/26/2012 -- The sketches from the Great Migration data will be an interesting collection.

08/15/2011 -- Balch News link at the Beverly Historical Society has been removed. Added link to published minutes at Internet Archive.

05/15/2011 -- We will collect a representative example that will support future discussions.

In an earlier post, we started with the list from Dr. Frank's book and then added in several families. We will start a new list here shortly (see below).

However, first, we can add (still need to verify this against what we already know) in another family, Samuel Gardner (descendants - database sponsored by thepeerage.com). Samuel is noted as being the son of Joseph and was born in England. Darryl Lundy's site has him migrating in the 1600s; he died in MA in 1696.

Now, Darryl has been doing an interesting project. He has taken information from books, such as Burke's Peerage, and has been adding this into a data base (see descendants above). As well, he has used information that has been documented. As you would expect, this work is not easy; Darryl's focus on this has been exemplary.

This post is meant to bring Darryl's work to attention as I have just started to review it in detail. It looks like it can be regularly used henceforth, as I have matched up some collateral family information with this database.

Similar projects are on-going in the US, to boot, such as the D.A.R. database. In the D.A.R. case, as strings (member back to a Patriot and, perhaps, beyond) get documented, they can be matched up (fiber metaphor applies).

Hopefully, we can help put together a well-sourced database for Thomas and Margaret.

04/23/2012 -- Conjectures are nice, if supported; in fact, we'll have an example of that shortly in regard to Thomas and Margaret. There are too many gaps, in many cases. We can't just fill these in without some thoughtful reason. Some families have on-going research that is supported by DNA analysis. One that I found to be interesting is the Gordon family's work.

05/21/2011 -- List from the American Historic Register. Named Thomas as one of the "Historic Founders" of the Mass Bay colony.

Posted by AJSwtlk at 5:13 PM No comments:

Recent events bring several things to fore, in the context of this blog. Earlier, it was noted that we want to look at early times for awhile before coming forward. Too, we ought to cut off about 1900, unless it deals with something of common knowledge or permission is granted. Then there would be the large middle periods, hopefully some attention being paid to various movements (westward, northward, ... - for instance, was there both blue and grey?) over the decades.

Early times would include information about the great migration and more, such as collateral families. The more later times would cover the wide net cast by Thomas and Margaret in terms of their progeny, such as Dr. Frank A, the John Lowells, Lucretia Coffin Mott, the two cousins, and more. For the middle times, the Nathaniels (Bowditch, Hawthorne) are good examples.

At all times, we'll keep things as coherent, as possible, knowing, though, that missing information cannot be recovered, many times. Yet, for some types of detail there is always hope.

In any case, at best, we can provide a fuzzy view. Hopefully, effort can bring things more into focus, except where there is no information. Some call that a brick wall, however a better metaphor might be a door: sometimes closed, perhaps at times ajar allowing a peek - we want wide-open doors, for the most part. But, some modern proof techniques, that deal with conditions of uncertainty, will have some usefulness, to boot.

Here are three items that will continue to bear some focus.
One effort will go into building a database starting with Thomas and Margaret that would include all of the collateral families. A wrinkle is how to resolve down to one tree a fairly disparate bunch of views. Or, since some are conjectures, can we really compare these (that is, need to allow multiple trees)? 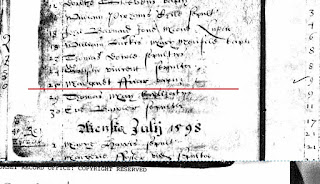