This issue of Gardner's Beacon reports on several research activities of the last six months. These will be covered in more detail the next issue of The Gardner Annals (to be published later in 2017).
Additionally, there is reference to the new URL, namely TGSoc.org. At this site, we will adapt a new format. While this activity is in process, the old site will be considered heritage (archival). Plus the new site will be the mail handler for the organization (contact - algswtlk@TGSoc.org). And, this year, we will print the first two volumes of The Gardner Annals with the first three volumes of Gardner's Beacon. We will announce when these are ready to be purchased.

See Vol. VII, No. 1 of Gardner's Beacon for a review of research to date.

Posted by AJSwtlk at 5:49 PM No comments:

Until a few days ago, we thought that we were the only defenders of Nathaniel Eaton. Along that line, we, recently, did a post on Nathaniel Eaton and noted his academic accomplishments which were substantial. Yet, he is vilified via Harvard's view related to tales told. Or, so it seems to go. Too, notice that we remark, in the post, about Dr. Frank's ignoring this subject.

Then, very recently, we were contacted by David Danielson Eaton who is a descendant of Nathaniel and is member of The Eaton Families Association (EFA). This group has been at it since 1884 and so will be of interest. Too, they have a connection with descendants of Theophilus Eaton. He was the brother of Nathaniel. We got an update to Nathaniel's Wikipedia page.

As an aside, as the Gardner Research article (next) was being prepared, the Eaton group was writing about Nathaniel (newsletters for members only). We have a copy of an article published by the EFA in defense of Nathaniel (Barbara Fitzsenry The 'New' Etonian (June 2015) "A Discussion of Nathaniel Eaton's Reputation as Seen by History").

This article was not seen prior to the Gardner Research article about Dr. Frank being a descendant: TGA Vol. II, No. I "Benjamin Brown Gardner (and Nathaniel Eaton)" which was published too in TEG 35:1. In our article, we commented that Nathaniel's experience at Harvard needs another look; there have been many posts alluding to this theme.

In a coming TGA, we will reprint parts of the EFA paper. Too, though, we learned that the Gardner Research article had been referenced in an Eaton article in The American Genealogist (see image). 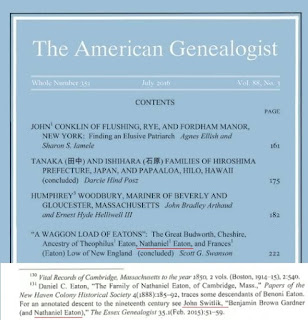 As an aside, many early writers noted that Anna, the daughter of Benoni who was a son of Nathaniel, died young. But, we referenced the notion of H.H. Crapo and the Knapp family that Anna married and had offspring. Too, we have this excerpt from a New Haven meeting in which Anna's information is corrected in pencil: The family of Nathaniel Eaton (at the Boston Library, available via archive.org).

No doubt, there is a lot to the stories and their provenances. But, it will be good to have Nathaniel get another hearing. Expect this theme to be continued in the near future.

One motivation. This may have been an early witch hunt. Dr. Frank's ancestors can tell us of that. As well, the whole theme applies to today (various ways). To us, it is another example of New England's long reach.

08/03/2017 -- What is the coolest obscure history fact you know? This question, on Quora, seemed a good place to present some of research findings. Nathaniel's experience is first, since the answer deals with Harvard and its roles. Not to condone bad behavior, however we need to look at this from Nathaniel's side, too. He was highly educated before coming over here. He met up with uncouth youth of the colonies. Now, here is an issue. Do you realize how Captains on ships treated their measly sailors? Not well. One might say torture. Too, slavery has been the norm for mankind for a very long time. Seems to sit well with some cultures, even today, that is, misbehavior there on the part of slavers, of several type. Incidentally, look at how the Puritans handled their misfits. Say, Quakers? The look from now to then, seemingly celebrated each year at the esteemed institution, is (has been) one-sided.

08/09/2017 -- In the School of Tyrannus (2014). Left this comment (Some of the 'apologies' (see latest updates on the Wikipedia page for Nathaniel) may have come from descendants (via Benoni who was left in Cambridge). Over the years, several have researched the matter which, to me (an outsider, and in-law, and johnny-come-lately), does need another look. See thomasgardnerofsalem for an overview.) on the page. There needs to be an engaged discourse.

Next up is Judge Francis M. Thompson of Greenfield, MA. This post continues our review of editors and contributors to The Massachusetts Magazine (started by Dr. Frank). Earlier, we looked at R.A. Douglas-Litghow, MD, LLD, F. B. Sanborn, and Thomas Wentworth Higginson (Thomas brought troops and supplies to Kansas in 1854 from New England, among other things).

Among other accomplishments, Francis was author of The History of Greenfield (Vol I - google.com, Vol II - archive.org). We will look at that.

For now, we want to list the articles published in the TMM, in order of their appearance. Both Thomas and Francis were out west prior to the Civil War. Francis spent more time and was a pioneer in Montana. So, there is a lot to cover.

The articles were titled "Reminiscences of Four-Score Years" and started to appear with Volume V.
We will go through these in more detail as they pertain to the westward expansion. The Montana Historical Society Press published Francis' story (2004): A Tenderfoot in Montana. The reprint mentions that the text came out of The Massachusetts Magazine.

We admit being late in writing about Thomas Wentworth Higginson. He was a contributor to, and editor of, the Massachusetts Magazine. Earlier, we looked at R.A. Douglas-Litghow, MD, LLD and F. B. Sanborn.

Today, I saw that several authors, including F.B. and Dr. Frank, had written about Thomas after he died (TMM, Vol. IV (1911), No. 3, pg 139). F.B. noted that he had corresponded with Thomas in regard to a topic that we addressed earlier (Final migration), in a different context. We quoted Cordley's book about the early efforts to found Lawrence, KS. There have been several posts about the long reach of New England into the western part of the country.

F.B. gives us a deeper look at the activity of Thomas in this regard. He helped form the State Kansas Committee. He was an active abolitionist. One motivation was the Charles Sumner attack. Charles was beaten in the Senate by a Southern Representative (1856). Too, Thomas, personally, knew, and admired, John Brown (more on that later). And, events in bleeding Kansas had gotten more violent.

There were several names for the Committee, such as The National Kansas Committee, as reported by The National Magazine, in Vol.17 (1893). Wikipedia does not have a page for this activity which is an oversight to be fixed.

Thomas printed his notes and letters (in the New York Tribune) from his 1856 visit to Kanzas. Thomas stopped in several towns and wrote a lot of Lawrence. He gives us a view of the area just prior to the Civil War which ensued, largely, from those events out west.

We will look at all aspects of Thomas' life. He is a descendant of Thomas Gardner of Salem. Thomas was also first President of The Old Planters Society.

Several of the TMM authors had ventured west. For instance, Judge Francis M. Thompson, of Greenfield, MA, toured the west following Lewis and Clark. Too, he was a pioneer of Montana.

06/15/2017 -- Thomas donated his files related to Kansas to the Kansas Historical Society. Story of His Life (1914) by Mary Potter Thacher Higginson. "Kansas and John Brown" from The Writings of Thomas Wentworth Higginson.

09/16/2019 -- The Colonel wrote a book on his ancestor, Rev. Francis Higginson, who is buried in the Charter Street Cemetery in Salem, MA.

Posted by AJSwtlk at 1:48 PM No comments:

Sidney at his best

Perley, of course. While working on the next issue of The Gardner Annals, I am looking at The Massachusetts Magazine, The Essex Antiquarian, and others. Too, we are looking at how Lucie M. Gardner picked up Sidney's work.

But, this little article on chimney sweeping got my attention. That, folks, was England and New England.

Please read the article. No need to say anything more.

06/14/2017 -- Sidney's periodical is available for ready at Hathi Trust: The Essex antiquarian : an illustrated ... magazine devoted to the biography, genealogy, history and antiquities of Essex County, Massachusetts.

Sidney last published Oct 1909. The next issue of The Massachusetts Magazine had the first continuation by Lucie.

Posted by AJSwtlk at 7:21 PM No comments:

Earlier, we looked at an author that helped Dr. Frank with his magazine, namely R.A. Douglas-Litghow, MD, LLD. RA was quite prolific.

There are many more, but let's look at F.B. Sanborn (updated the Wiki page with a pointer to the Massachusetts Magazine) who popped up as we were looking at, and digging into, the minutes of The Old Planters Society of Salem. In 1916, F.B. gave a talk about Hector St. John, calling him an evasive planter. The story is interesting.

It is interesting that Hector was the namesake of St. Johnsbury, VT through his friend, Ethan Allen.

There will be more in the upcoming issue of The Gardner Annals.

Too, we will bring forward all of the Old Planter Society minutes that we can find. 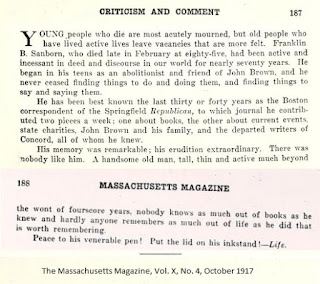 Posted by AJSwtlk at 1:41 PM No comments:

Thomas Wentworth Higginson was the first President of The Old Planters Society (TOPS) that instituted in 1899. Frank A. Gardner, M.D. was Vice-President. The members list consists of illustrious descendants of the early colonists (see below).

The following documents are found at archive.org.

In the pamphlet, published June 19, 1900, there is an overview of the society (page 11) and its motivations. We have seen this mentioned elsewhere, but one purpose was educational. And, one focus was to get those here before 1630 included in historical looks, excluding the "Mayflower people."

The Thomas Gardner Society, Inc. agrees with this view and will carry this forward using The Gardner Annals. The issue for Vol. IV, No. 1 is in preparation.

In that same section, we find the reading list of the Society. These are on our bibliography, but we will be looking at them again.

Finally, the pamphlet starts out with a talk by Col. Higginson. It was titled "The Alliance between Pilgrim and Puritan in Massachusetts." The TOPS published many talks which we will document.

Of note, briefly, though, is that in 1900, Col. Higginson was 77 years of age. Many other members were elderly.

Dr. Frank and his sister were much younger. Too, later, Lucie M. Gardner was Secretary of the TOPS. TOPS published via The Massachusetts Magazine (started printing in 1908) while it was published. Lucie edited a section that was titled "Pilgrims and Planters" that reported on meetings of the TOPS, offered commentary, and gave notice of the activity of other organizations, such as the Balch Family Association and The Gardner Family Association. The TMM ceased publishing in 1918.

06/14/2017 -- Thomas Wentworth Higginson and Bleeding Kansas. The Massachusetts Magazine (Vol. II, No. 2, pg 117)  reported that it was an official arm of the Old Planters Society. 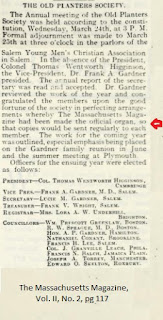 06/04/2019 -- Sidney on the Old Planters Society via The Massachusetts Magazine. 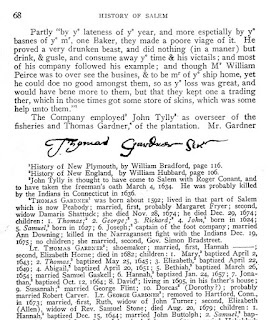 Posted by AJSwtlk at 3:48 PM No comments: