Seems that this year, we're looking at cemeteries. Early on we were considering what happened to the one at Gardner's Hill. This will feature in our 400th planning. We were also looking at some grave decisions in Lynn, MA.

In this case, one of the oldest cemeteries in the U.S. (1637) is being closed before the Halloween season. Many of us are happy about this as we have heard stories of misuse for several years. Thousands descend upon Salem in order to celebrate various views. This year, the cemetery will be off limits, as the city of Salem had planned some renovations (Preserving Salem) to start soon. This will also give them a chance to further assess ways and means. Some renovations will be established paths through the area which is adjacent to the Witch Trials Memorial (lots to study in that regard: Dr. Frank's grandmother - Lucy Foster Wilson Gardner). 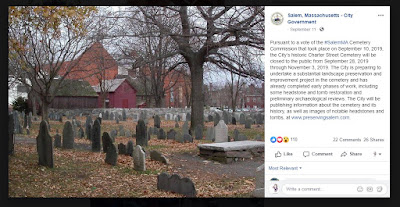 The blog, Streets of Salem, looked at the subject which motivated this post: Cemetery under siege.

The Cemetery has a Gardner Annex which we will be looking at further. Jonathan Gardner #105, for whom Rev. Bentley preached a sermon, was buried there along with his wife, Sarah Putnam. We will research burials of others, in this cemetery, who are related. Dr. Frank mentions several Gardners with stones in the cemetery.

This cemetery is also known as Burial Point Cemetery (findagrave). The 'Famous Memorials' comes up with five names, all related: Simon Bradstreet, John Hathorne, Francis Higginson, Samuel McIntire, and Capt. Richard More. There are 18 graves with the name 'Gardner' associated with them. There are 12 graves with the name 'Higginson' on as last name. 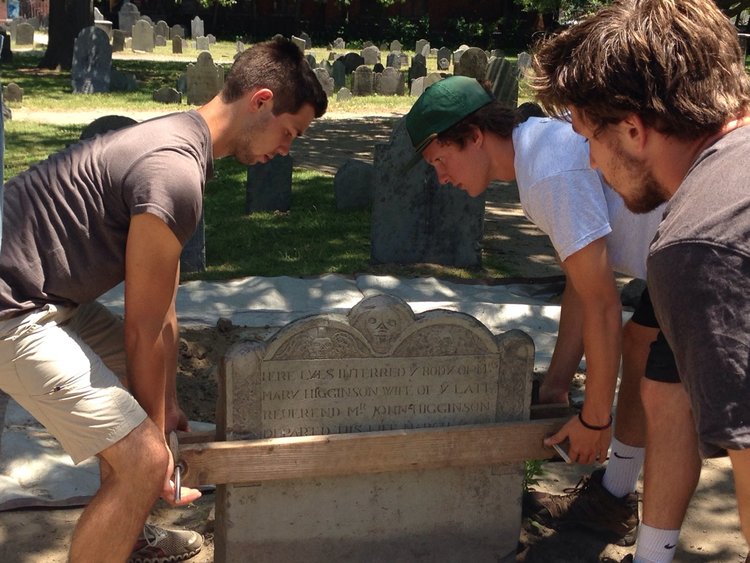 09/14/2019 -- Updated material about the Higginson family. Rev. Francis is the one who wrote, glowingly, of the Great House (Cape Ann) that had been moved to Salem by John Endicott.