TL;DR -- A look at what we need to do and the various contexts involved including our content which covers several domains and our need for configuration management. The web's evolution will be on the table in terms of choices, both good and bad, by the developers of the mess. Updated graphic and comment about WordPress are later edits. This was a pre-COVID post.
---
We have all heard this over the past couple of decades. Well, we can finally say that things are at a crux, especially with the emergence of DL's facilities. They were always there; of late, people learned how to exploit.

Create or discover? Well, like the chicken and egg, which is first? I'm of both minds where 'discover' is given respect. So, Poisson's name is on stuff. He created this. Or, was he describing what he saw and we labelled it with his name as if the underlying ability came about with observation?

With the internet, we get to reason on these things, again, albeit with some practical focus as the intent is to use the thing properly, smartly, and to the best of our ability. I've put out a few posts about this. In July, it was Techie stuff. There were things before, say the technology blog. This started at WordPress[dot]com but, recently, moved to be under our 'portal to truth' (lots to discuss there). At that site, we have continued our blogging about decisions.

I have been working alone, for the most part, just following my intuition. 'Minimal' was one goal. Last fall, I mentioned some Google discussions that were right on (in this old guy's mind) and comforting, actually. Though, as an aside, they own this blog space. We're looking to pull it, too, under our portal.

In the meantime, AI is going bonkers. It's obvious, to me, that the black box can be tamed. It'll take us getting back to logic. What the hey? Minsky of MIT went to his grave arguing that the aNN (no matter the variations, thereof) as not the way. Not that I agree with him entirely, but he was not off the mark. Everywhere, we see AI this and AI that. Makes one wonder if some parts of the populace have lost their marbles.

As an aside, our portal thoughts make use of the fact that Thomas Gardner is almost a tabula rasa given that we know only a little but have the huge set of progeny to ponder. That means, in other words, the 'every man' is the theme or meme. We'll get back to that.

This blog has been going for 10 years. We started the WordPress one due to the details being handled with regard to choices. Of course, as we studied, we had to see where the crowd was going (below). And (yes, this is real), every time, we looked at what led to the current state (our's and the world of computing's) and tsk'd (want to know why? paying attention to the messes?). Sheesh. Do we ever get anything right? For anything of benefit, there are a slew of side-effects, costs (what have you) that are negatively imposing. This is without fail.

AI came on the scene, again, the past few years. Gaga time. This time, though, the older minds were saying, wait, let's talk: ACM, IEEE, etc. So, that's something else to discuss.

But, with regard to what the TGS needs, we have to develop. I have run across roll-your-own schemes. Guess what? The monied crowd does this to remove dependencies upon others. I'm stressing it due to issues of truth engineering. In any case, code will be to the fore. What? Yes, too many are being led down paths to perdition, it seems. We have been right so far in that assessment. I don't see glowing examples, yet.

As an aside, with regard to the below, we were doing Microsoft in the (mis-guided?) notion of going with ASPX and its way of the world. We'll mention this again.

But, the tools are there for us to do things better. Metrics, in other words, used wisely can be quite helpful. The benefits that have accrued properly to technology are examples. Lots of them. So, getting back to the theme of the post, here is an example.

This image comes from the source for a post that is worth reading: How WordPress Changed the Internet - 17 Facts about WordPress. I like it if only it shows that the old guy isn't off the wall.
Aside: The source? W3Tech and their Web usage surveys where they are looking at content management. Look at the count! Babel building. 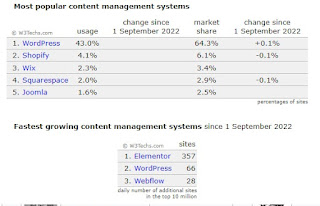 In the 2012 time frame, as we were being kicked off of Microsoft's site, I looked at all three of these. In fact, I prototype'd a TGS site. At the time, I was up to my ears in new information having started to really get into the history and genealogy of the Cape Ann crew. So, there wasn't time to play with configuration when 'content' was the key thing. Notice the comparative growth of these three.

Aside, content and configuration? These differ (the media is not the message).

I looked at WordPress, again, in 2014. Those prototypes had been done under our own server. In the new mode, I went and built under WordPress' site (in the beginning, there were no ads; they came later; hence, we're moving). But, in 2012, I fell back to HTML, tables, icons, and mouse handling. It worked. On the 2014 go around, I brought in CSS and some javascript. The latter was, finally, made more central as it builds the page.

Now, what was one problem in 2012? The database. Too much of it (let's discuss). We can go into this, but the TGS site uses Linux and files. Guess what? Recently, after reading some UBerkeley stuff on AI, I went to GitHub, finally. Ah, the choices, related to text or graphics, etc., were all there for daily discussion while people were, at the same time, doing useful stuff within their chosen framework.

Talk diversity. This is one type that we need and can handle. Though, there are always forces pushing for homogeneity. Mathematicians love this.

BTW, on the latest look at WordPress, as I was bringing it into our portal, I looked at the 'biz' aspects of its use. Nickel and dime'ing was my reaction; like the menu that is ala carte. Nice, but, I want to see what's under the cover (or hood or ... - we used to say). Too, I want more than mere parametric influences. BTW, that is one issue with DL and AI, right now.

Yes, again, anyone interested in machine learning in the context of TGS, pipe up, please.

Closing this out, we have lots of things pending. See this blog that will move (https://jmswtlk.github.io/GitHub-ing/) which will cover the deeper technical issues as we go along. So, indeed, we're talking infrastructure in a new sense, actually senses.

Oh yes, ASPX. Recently, I have been helping in a situation where this is the framework. Not as a developer, but rather as a late tester of a new process. Interesting. Some things I liked, others not. How to get the proper balance will always be a key thing? And, whose balance?

Aside, again. The earlier post pointed to a project management scheme that has gotten a lot of attention. It reminds me of the old Apple package that was card-based. That is, one had cards that linked in a manner that was fairly powerful (we're talking 80s, folks). I see it referenced from time to time. Lift the covers, and you'll find old routines still supporting the computing world. Trouble is, though, that it's in the GUI world. Most stuff is. Developers? Many stay away from that. Actually, WikiTree is balanced and a joy to use. GitHub is more textual with add-ons for the GUI'ness.

How ought we to go? Decisions will be made. None will be in concrete.

When looking at Drupal and Joomla, I also looked at Concrete 5. It's still around. The Army picked it. Okay. How does one decide in all of this? Want to know. Computational sustainability. That'll be a future topic.
Aside: Paying attention? Old guy off the wall? Well, no, here is a current discussion of Concrete CMS versus Wordpress. Of course, it is from Concrete CMS's viewpoint. You see, 'new infrastructure' points to changes that will be permanent. Users want more control. Developers want tools. Content creators and managers want ease of applying power. Finally, John can say, about time. Maturity?

10/07/2022 -- Updated graphic on WordPress which had come from a survey. Put in pointers to survey. This week, decided to use WordPress to prototype our configuration.