I couldn't resist this. Earlier, I did an answer on Quora to this question:


My ancestry is more than 75% English. What are the chances I'm related to King Edward III?

First, note that it says 'related to' not 'descendant from.' So, that is one key. Another is that modern technology allows a little more precision in this type of search. Of course, there are more things to discuss, but let's avoid those this time. The answer allowed me to feature WikiTree using Dr. Frank A. Gardner's lineage to the extent that we know it (we extended this last fall using his notes about his mother's heritage). Later, I was able to see his father's notes in an early copy of the 1907 book (given to Stephen Wilson Gardner by Dr. Frank).

The work, notes, books and such went along with a burst of energy and activity related to genealogy and family history motivated, in part, by the 300th celebration. Now, we have the 400th look-backs either coming up or having already started, such as the Mayflower activity. Due to several factors (location, family ties, and more), the Mayflower descendants have been more scrutinized than many others. Yet, the information is not entirely complete according to one blog post. We will get back to that, take the case of Richard More who will be mentioned in a coming post. We looked at him earlier: seemingly lost, rediscovered, related to the family, etc.

In fact, Richard came up as I was going through notes to find the earliest Mayflower connections with the children of Thomas and Margaret, eight of whom had children. Richard's daughter married the son (Joshua Conant) of Thomas' daughter (Seeth). Further, Richard's sister-in-law married a Woodbury so there are all sorts of relationships to follow through on. Even with technology, those things are tedious and error prone: tired/old eyes, say, or quality of the provenance of the material being used.

Oh for a good database to start with. Well, there are several, hence the Mayflower reference. We can use those as a yardstick for comparison. There is more, as many who came over had known histories. The Mayflower look back is considering their ancestors in this regard. And, their data can be used for studies, such as mentioned in this answer:


What person is descended from the most number of Mayflower passengers?.

There is a chart to a related theme of 'How long is a generation?' The data from the 'fifth generation' from the Mayflower one provides a view that only technology can give us. We need to keep that in mind.

Everyone, for the most part, has Edward III as some focal point, for Americans. Later ties are clearer and less prevalent. Earlier ties are associated with huge amounts of hits. BTW, WikiTree's efforts at their Magna Carta Gateway study are apropos. Lineage path by lineage path, the route from Gateway Ancestor to a Baron is being confirmed, using Richardson's books, for one. 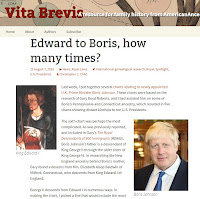 What of the other side of the waters? Well, this recent blog post looks at one person of current interest: Edward to Boris, how many times? The author did the generation length study mentioned above. He references work by both Douglas Richardson (mentioned above) and Gary Roberts.

Relevance? This same type of work and technology needs to be done with Thomas, Margaret and all who relate to them. What Edward III studies allow is sufficient material that has been scrutinized for centuries. Getting away from that brings in all sorts of uncertainties that can be interesting in themselves.

BTW, Boris, of course, is the newly appointed (as of August 2019) U.K. Prime Minister Boris Johnson. He has an American Ancestry. But, we can use this work for other families, too, as Gateway Ancestors left family in the old country.

It's nice to see this type of thing where news motivates research and holes close. Then, the small folk can leverage off the work of the big-time folks ;>).

There are several hundred mappings from Boris to Ed III. The post's image looks at one. That is one aspect of the situation. Say, for lineage? One maps directly. Or with the one with the most documentation. Maybe, later, one goes back and fills in collateral information. But, other people (cousins) can leverage off of this work, if they have siblings of someone on a pedigree line.

We'll have several posts later related to this 'open issue' for Gardners.