We will have more on Stephen. But, recently, I had a chance to look at the first copy of Dr. Frank's 1907 book which he dedicated to his father. I took a couple of pictures and am excited about the research possibilities. 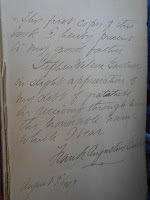 This first copy of this
book I hereby present
to my good father
Stephen Wilson Gardner
in slight appreciation of
my debt of gratitude
in receiving through him
the honorable name which I bear.

In the book, Stephen had marked up several pages. Also, he had left pages with some notes. For one, he had a list identifying some of his 3rd and 4th great grandparents. Last year, we filled in Dr. Frank's tree using his own notes which agreed with those of this father. This information has been transferred to Dr. Frank's page on WikiTree.

Then, for the first time, I saw the plate that is between pages 13 and 14 in the book. This is the description of the image:

This reproduction of an old painting in the Town Hall, Peabody, shows the encampment of the Danvers Light Infantry, the Middle Precinct
Church (second or third structure), and the Andover road (now Central street) leading across Gardner's bridge over Gardner's brook.


What? Painted in 1826. That is before the issues started to crop up: 29 December 1674. Too, most digitizations just smudge up the painting. Well, I took some pictures and created this view. We know it is near Gardner's Hill. We can identify direction.

Note, please, we see elevations. So, that will be important. In the following, the leftmost piece is a copy from one of the digitized versions. Then, I split out the image with two closeups. The lower left is the left side of original image and shows the church. This was the Middle Precinct Church that we need to look at further (later known as the South Congregational Church whose congregation is still around). 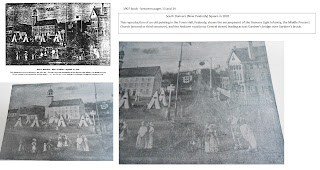 Note, too, that the caption of the image mentions that we see the bridge over Gardner's brook, also known as Strongwater brook. In both of the photos, we see elevations. Also, the people are of the period. Finally, this is, very likely, an extant painting. Where is it currently?

The image, from two pictures, shows Gardner Hill (right side, behind the lamp post) if this is looking along the old Andover Road. Need to map out the distances (later post).

04/24/2019 -- Dr. Frank didn't have the advantage, as we do now, of the aerial photos with improved mapping facilities plus the computational framework abetted by mathematical advances in the past 100 years. Sidney Perley walked the area and drew out his map (see the "29 December 1674" post mentioned above). Others did, as well. We'll see if we can find other photos of this painting. Too, the goal is a composited image which is about all that we can do. Reminder: I saw a quote once of someone saying that Thomas liked the hill as he would see the water. Was that North River, Collins Cove, or the waters of Salem Harbor? Or, even further? I will look for a better image of that page. Too, we ought to look for any painting of the area prior to 1830.