Earlier, we had a post that described a dedication by Dr. Frank to his father and that mentioned the plate that was in the 1907 book. The painting (from 1826) of the plate showed South Church, mentioned Gardner bridge on Andover Road (now Central) and showed a few buildings. We included a copy of the plate that was black and white. It showed some detail but was of the technology of the time.

Then, we found a later sketch of the area (1848). The church had changed in orientation and form. The view was the same. We also mentioned that we were amassing material since this is close to Gardner Hill. Finally, we got hold of a brochure that had a little more information such as identifying the buildings. The painting was in living color. It attributed the work to a different painter. Also, the year was changed to 1828. So, what gives? We included a link to (and a graphic from) the History of Essex County, Massachusetts, 1888, Volume 2. That was Dr. Frank's source.

Today, we, again, show the 1826/28 view and a better reproduction of the 1848 view, except, it says before the Civil War. This is the same view. We will be gathering more information, however let's look at what we are seeing here. As, until now, the exact location was uncertain and the direction of the view was unclear. Too, Dr. Frank had mentioned Gardner's bridge. 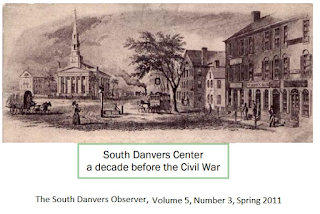 These two views are the same. The straight ahead view is of Central. Gardner's bridge is now where Walnut Street is.

Notice the lower caption. It says, The South Danvers Observer which is hosted at the Peabody Institute Library  (stale pointer). The SDO? Here is its directory (was pointer, now stale). In the first year, it used the context to determine the year. So, we have Spring 1915, Summer 1895, Fall 1868, and Winter 1866. I found Winter 1866 (was pointer, now stale) by looking for images of 'South Church' on Google. On noticing the material in that issue, poking further was imperative. Great work.

In the Summer 2010 issue (was pointer, now stale), there is some mention of Gardner's bridge. That helps set the orientation as shown on this map. 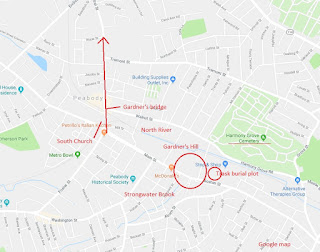 We will be looking further. The goal is to describe the area where Thomas was buried and to determine activities related to the area from the beginning. In the 1861 publication of the Historical Collections of the Essex Institute, there is reference to Gardner's brook near the South Church. 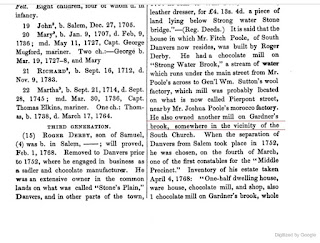 11/29/2019 -- Had pointers to the South Danvers Observer which had articles on the area of South Church and the church itself. These were there in May of 2019. Now gone. So, where did they go?