As mentioned earlier, we're going through Sidney's "The Essex Antiquarian." This is on-line at the Peabody Institute Library. Remember, Sidney was a friend of Dr. Frank. Besides, we like his idea of a walk-about. Quite frankly, his stuff matches up well with modern views (example: How close is close? II).

So, we are not taking them sequentially. And, I am paying attention to the walk-abouts that Sidney did. As, we learned about Gardner Hill (and Gardner's Bridge) from this work. Sidney sketched a map of Salem and the area as he thought it might look in 1700 from his walk-abouts plus reading the official records. So, these volumes are interesting from the first word to the last.

So, in Vol. VIII (1904), we see the area where we have Massey's Cove and the area that leads to Essex Bridge. In all of these maps, we look for obvious Gardner references. Many times, we find this in the text. But, we saw that a Henry Lunt had his name on a lot. This is a Newbury family that came in 1635. It's a grandson of the original water crosser who received land from his father-in-law.

But, you see Massey's Cove mentioned. On the other side, you see 'The Cove' which is now known as Collins Cove. We'll get back to that. On a search, we see an entry in Streets of Salem about this area. It was supposed by Sidney to be where Conant's little crew landed after their move from Gloucester (Cape Ann). Too, there was a painting (I'm trying to collect these - see Gardner Bridge above). It's theme is the first winter. we just did a post on the first year.

In the comments for the Streets of Salem post, there is one mention that this might not be correct. So, we'll have to dig deeper in that controversy. Whatever the situation at Naumkeag, Thomas and Margaret were cozy in Gloucester (house and all). As we mentioned, the first idyllic on the American shores (Cape Ann).

But, getting back to the work of Sidney, one of the lots, it is said, had been in the possession of Thomas Gardner, Jr. It was in the area marked "Old Planters Marsh" which is where they got materials, such as thatch. The ownership went Balch, Balch, Gardner, Higginson. 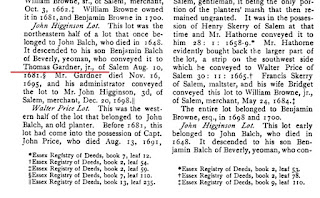 That reminded us of Thomas, Jr. We have not heard much of him. On looking further (Dr. Frank's 1907 book), we see that he had a wide-ranging bit of land, including some that was above Ipswich River. So, we'll be digging deeper to get a better sense, including looking at all of Thomas' children.

Before today, we had not looked at this area and find it very interesting. Hence, we'll be going back through Sidney's maps and digging a little deeper than before.