(Not) far from idyllic

The prior post mentioned that the life on Cape Ann was comparatively good, almost idyllic. That usage of idyllic was very loose but does suggest that we take a pause to consider several things, again. When Conant showed up, he did not find starving people. Rather, they were healthy enough to be boisterous, albeit in a civilized manner.

Again, there was no failure at Cape Ann venture except that of not meeting unfounded expectations.

So, let's jump ahead to Endicott's early times. Then, we can consider the plight of some who came with  Winthrop. Mind you, Thomas and his crew did well due to effectiveness.

Just like the Popham venture, that was successful, the Cape Ann experience was similarly effective. They were so even as they bridged the areas of Cape Ann and Naumkeag. But, in the winter of 1629-30, Endicott lost several tens of people. Sure, some may have been sick. But, others died due to exposure from lack of proper housing. Mind you, at that time, Endicott had his great house.

Many died from improper diet, mainly from the fact that there was not enough food to go around. So, we can see Rev John's confusion as he finger-pointed to the Cape Ann crew as less than worthless. Even after Winthrop, the settlers had to send back to England for food.

What a change of events? Thomas' crew was self-sufficient, yet they have been beat upon and considered failures (by a warped type of history). We have to agree with Conant, and others, that the early crew did not get the recognition that they deserved for helping to settle the area.

Well, we can start the effort to tell the story of these folks who nowadays were overshadowed, in the national attention, by the ones who arrived off-course in the area to the south of Cape Ann.

Of course, we also must note that New England was shipping out excess product back to England within a decade or so. Rev. John may have been gone by then (or too old to care). 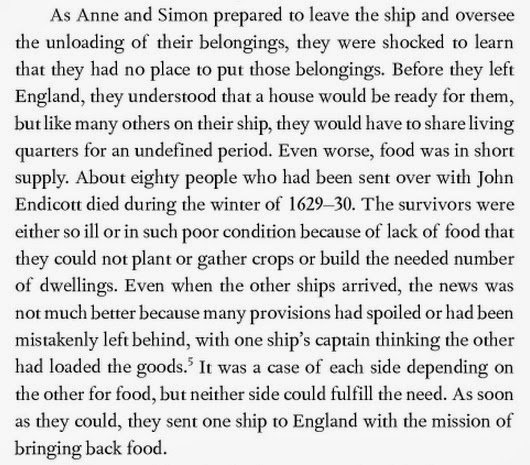 The image to the right comes from Kellogg's book on Anne Bradstreet (Thomas Nelson, Inc. 2010). The author remarks about the strawberries on Cape Ann. Also, he quotes Winthrop on the pleasant, garden smell that they experienced, when they arrived.

We will look more closely at cousin Anne since she was very young (eighteen) when she arrived. Also, her whole take is more true than Simon's (a whole set of discussions pending).

Now, looking ahead after the landing, we know that Winthrop didn't like Salem. Most who came with him, probably, were disappointed. Kellogg writes that "Anne and Simon ... were shocked to learn that they had no place" to put their belongings.

Evidently, the couple had been told that there were structures, in fact houses (well, there was Endicott's), in the new area prior to their leaving England. But, no. The reality was that a few meager huts were about. Some dwellings may have been built that were of more solid stature that the wigwam; no house would have rivaled that which Endicott had ordered to be brought over from Cape Ann.

One has to wonder if Thomas and Margaret helped by allowing a family to squeeze into their small place (as we now, not the Great House).

And just like Endicott's entourage earlier, Winthrop's people found out that there was a shortage of food to go along with the dearth of housing. And all this lack happened despite all the planning for a "multi-step approach to settlement" that had occurred in England. But, in hindsight, we can still counsel that these things happen today.

Fortunately for the new arrivals, there had been some structures (at least one with two rooms, up and down) built in the Charlestown area by Thomas Graves where Winthrop and his colleagues could go and plan their future (leaving their women, of course, in Salem's squalor - while enjoying their barracks, so to speak). We need to look further at Mr. Graves, as he, like Mr. Gardner, was of the effective type that knows how to do things. Graves had come over with Higginson a little after Endicott. For some reason, Mr. Graves returned to England, later.

So, for a brief period, we had on Cape Ann, something that exemplified what Winthrop named but could not see. That we are still in the process of unfolding the American experience, it only stands to reason that those events of 400 years ago ought to be part of the framework from which we live and with which we think (it would be about time).

And, re-telling the tales is one task even when we're faced with a tabula raza situation.