It occurred to me, as I was researching material related to Cape Ann and Thomas Gardner, that I ought to explain one of our interests. We can use genealogical forensics, as a loose example but a not weak analog (reminder - we are more than a few steps removed from fictionalized history - which, by the way, is a respectable field. How else can we get the movies, etc., out for popular consumption?).

Now, let's use the recent case related to Richard III (notwithstanding that some proposals have been found to be without merit) as it is an example of another type of forensics, namely anthropological. The image shows the results of a Google search on the subject of the reconstruction that was done from the remains that had been found and identified as belonging to King Richard III. By the way, The British Museum has an exhibit about this discovery. 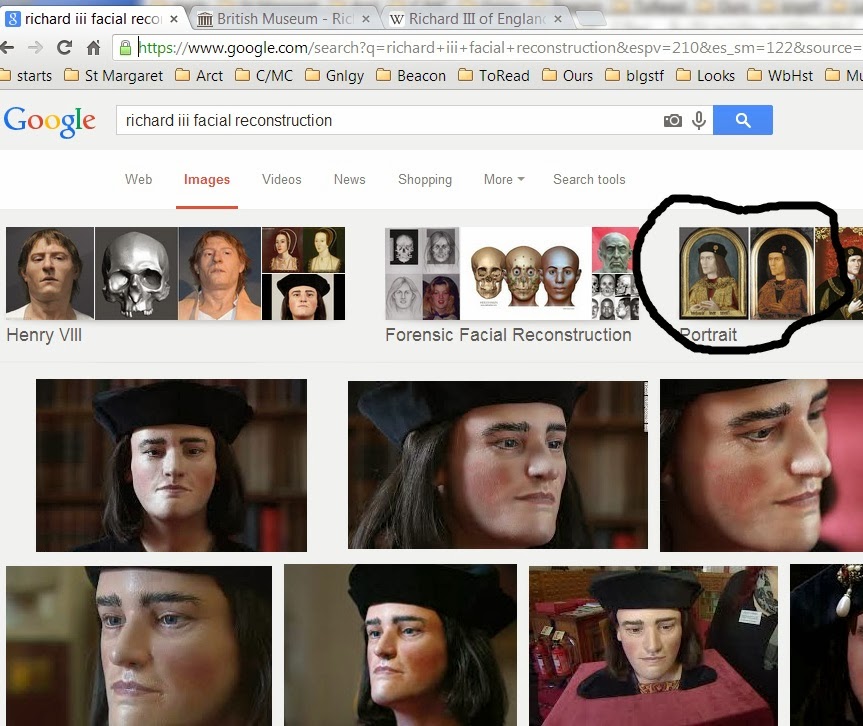 The reconstruction looks a lot like what we saw with the portraits (see one of Wiki's image). So, one might consider that it (see the circled part in the image) was factor in the work. After all, how many Brits would not have Richard III imprinted on their psyche?

However, consider that similar efforts can be done with much fewer pieces. Too, as we know, a lot can be said about an individual from a small collection of data, sometimes (that being said, "big data" peoples, your aggregates of me, and many - most? - are way off base).

Before we go further, I need to point to the Forensic Genealogy Institute with whom I have no association. I am a private person, doing gentleman science - let's talk about that (in company of Faraday and a whole lot more). Disclosure: I am not a genealogist, historian, and a number of other things. What I do know are mathematical modeling (especially that which is computationally framed), many of the liberal arts and sciences (does that date me?), some military affairs, business/economics/finance, and a whole lot more. Actually, the best description would be autodidact who has broad interest. Too, I have known Gardners for almost half a century.

By the way, I have mentioned anceSTORY, before. The name has a lot of meanings. Yes, there are the dull details of the past. Too, there are those things that are known (and some were very clamorous - you see, people haven't changed much - I prefer Teddy's walk softly adage) and written about. Is that not history? But, then there is "being" (the larger story that is not captured by historical accounts - but, that is rectified now and again, see Joseph Hodgkins, as an example, albeit that McCullough could start with letters -- don't forget, though, that we can get to Heidegger, et al, to boot). That is what we're trying to capture.

Needless to say (but I will anyway), we must start with what we know. That means, in the real sense of science, what we have found out so far. In the case of Thomas Gardner (and Margaret), there does seem to be a whole lot of holes to fill in. Looking into expanding the base of knowledge is one task. I have only been at this four years, but I do not see evidence of any concerted, long term, effort to fill in the pieces (if I have missed something, let me know).

Too, though, would be to fill in pieces (using arguments of various strengths) as best we can using modern means. How effective this type of effort might be will become apparent as will its benefits as we go along.

Naturally, success will be best ensured if the brain is engaged during the exercises.

Moral: People were. That they (or information about them) might be acceptable to genealogists, or not, does not change the truths of their existence nor the reality of their continuing influence. Ought genealogists take lessons in how hubris is always just around the corner? As in, genealogy might help "flesh out" the truth; it does not define such.


03/03/2014 -- New science? Yes, bringing memes (and more) to the fore in the discussion. In the terms of Thomas, his progeny has a wide sweep, including the step-progeny. ... Of course, genealogy can apply to more than biologically framed lineage. For instance, mathematicians have their "ancestors," know about them (and their contributions), and honor them. What other field does that? My mathematical pedigree: Galileo Galilei (1585), Vincenzo Viviana (1642) Isaac Barrow (1652), Isaac Newton (1668), Roger Cotes (1706), Robert Smith (1715), Walter Taylor (1723), Steven Whisson (1742), Thomas Postlethwaite (1756), Thomas Jones (1782), Adam Sedgwick (1811), William Hopkins (1830), Arthur Cayley (1864), Andrew Russell Forsyth (1881),  Edmund Taylor Whittaker (1895), G.H. Hardy (), Edward Charles Titchmarsh (), Andrew P. Guinand (), Lucio Arteaga (1964), the blogger (). I took it back to 1585 since that would be co-temporal with Thomas and his parents. Too, note that the ancestor is an adviser or mentor or tutor. This brings to mind that a meme'tic look at descendancy would consider the influence of step-child-ness. I have found many of these relationships. For instance, for Thomas and Margaret, retired Supreme Court Justice Sandra Day O'Connor is a step-descendant. Thomas Dudley has a slew of step-descendants as do many due to early deaths and re-marriage being so common.

03/24/2014 -- Read, recently, a review in the WSJ (Book Review, March 7, 2014) about the work of Anthony J. Martin, a paleontologist. There was much discussion about determining dinosaur look and behavior from minimal evidence. That is, even footprints can be used in lieu of bones. The key, of course, is being knowledgeable enough to extrapolate from the small set. Too, there is information in the limiting factors. ... We can similarly reconstruct a scene from the past, with care, so as to be able to look at it from our later advantage point.

04/25/2014 - Genealogy almost seems to say: without papers, you (and your ancestors) do not exist. We know that this is silly thinking (albeit, probably not recognized by those who do such). Attempts at extrapolation (like, what was over the pond for an ancestor prior to their departure) or interpolation (filling in missing pieces) ought to be given more credence; that is, such attempts are more than mere science fiction or fictional history. Why? Ichnology allows grand portraits from seemingly minimal amounts of stuff in hand. Of course, the discipline has known rules. Also, from time to time, something comes about that affords verification (and calibration). The same techniques could be applied to the ancestral realms (and has been, again, in the fictional form). So, that is something on our plate, discussion of such methods and of their use (with demonstrations).