A continuing theme will be the History of New England. Attempts at this theme were done early on. We will review those attempts. All through the years, there have been other look backs. What needs to be done is to develop a personal view. This will take time and effort and research.

We are now fifteen generations, or so, past Thomas' and Margaret's time in New England. Our modern life is far removed from what they saw on arrival. We want to look further at their lives from the beginning here as well as before. We can start a look back since we know more about Margaret. Since Cape Ann is the focus early, we will look at it time and again.

As an aside, let's see the remarks of Anne Bradstreet who came over several years later with the Winthrop fleet. 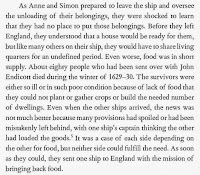 "They were shocked," we see. Before leaving England, they were told that there would be a house ready for them. What did they find? They would have to share living quarters. We look at those quarters, below.

Not only was there lack of housing, later on there were too many people. As the report notes, eighty people had died in the winter of 1629-30. For the early crew, we have not heard that there were deaths.

In comparison, the Popham crew (1607)went into Maine and lost no one over the winter. In fact, they also built a sea-going vessel. They gave up the colony since the leader had a death in the family, and no one wanted to take his place. 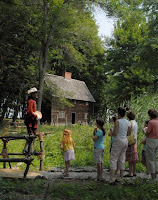 So, what was it like that first winter and the next few years? We know that Thomas brought a house with him. We have written of this earlier. See Wikipedia (Great House - Cape Ann). Unfortunately, it was moved from Cape Ann to Salem by John Endicott. He hosted John Winthrop there when that party arrived on the Arabella. Also, Winthrop remarked about the house, as did Higginson, earlier.

This left photo shows a replica based upon study of material from that era. It was built for the 300th anniversary by George Francis Dow. It was two stories. John Goff wrote of the house as he looked into the details of Pioneer Village.

Most of the material for the house was brought with the crew. One expert remarked that the house had been built to move. After Endicott had it moved to Salem, it had an interesting history, ending up as part of another building in Salem.

Later, the house was extended with another floor added. The image on the right was drawn from memory and given us by the Conant family as they had lived in the house after Roger came into Cape Ann. One might say that this event was the first transfer of power, from Thomas to Roger. Later, we know that John took over. 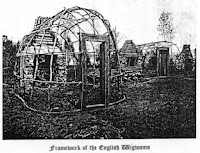 Where did Thomas and Margaret go? First, consider everyone else was living in a wigwam. Houses were being built, but there was an issue of material as well as skilled labor. We see in the records that carpenters, for instance, were well received where ever they went.

The Bigelow family site has a couple of renditions that we can reference. The left photo shows the framework for the wigwam. Note that we are looking at a later rendition. When Thomas and Margaret arrived, the structure would have been more crude, not unlike we would see with a camping site today. There was a door on one end with the fireplace on the other.

Prior wigwam's might has only allowed for a small fire. We will be looking at weather, for instance. We know that several winters were quite extreme (General crisis) during the early New England period. For instance, the Thames froze in 1620. Several  years were very cool which inhibited farming.

The right photo shows the wigwam covered with rush. Some might have tried to use canvas. We know that a good weave of the rush would prevent water from getting in. Insulation would be a problem, though. And, heavy snow could be a contributor to collapse as well as leakage through melt.

Finally, on the left is an interior view from the Pioneer Village exhibit. The wigwam could have been considered cozy with a fire going, however the walls would shake with the wind.

After a snow fall, one would be hoping that there was no too much of a drift into the wigwam or along the access.These thoughts are apropos given that we are just past a snowy winter.

The re-look at history ought to take a bit of time. We can think about how to present this material. Right now, there are blog posts. Too, there is the index by image at our portal. But, the media choices today are quite wide. In every period that we look, we will try to find all of the material that may pertain that has been collected by other researchers. So, one benefit we expect to provide is a site where correct and pertinent material is accessible through time.

08/11/2020 -- We have used categories in the post. We also have used pages which allow some structure. Then, we have the other media to consider. One thing is definite, we will have lists of important topics. On these, we will find Origins and Motivations.

Email ThisBlogThis!Share to TwitterShare to FacebookShare to Pinterest
Labels: Houses