TL;DR - Why did people come here? That is, to this side of the pond. Lots of reasons. Boone is an example of a later arrival who made good.

Recently, we revisited the topic of Origins and Motivations. In that post, we listed earlier posts dealing with the subject. As we proceed, we will be pulling posts from the past, into some type of cohesive view as this allows us to reflect on what we have seen as well as think about the future. And, we need to consider post-virus realities, for various reasons such as our sanity.

Speaking of reasons, we had a query about the motivations for New England. Our response went along this line which follows what we have run into the past decade.


Rose-Troup (she researched the Dorchester Company in England for years), Albion's Seed (nice look at the paths that led to the U.S. from England), and on Dorset (great countryside).

However, let's broaden the scope. As a first step, we can look at the view of the Revs. White, Winthrop, and Higginson. At The Winthrop Society's site, we find this document: "Reasons for the Plantation in New England". It has a list of Reasons and then some Objections. We will go back through these, but let's look at one Objection. 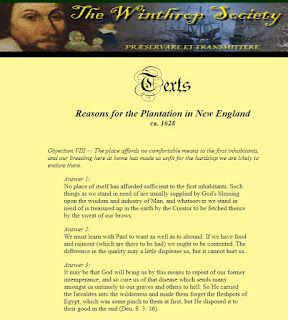 In the introduction, we are told that the author is not known but that later edits were done by John Winthrop. The changes are in the hand of his son.

The following document was found among the papers of Governor John Winthrop. Other abridged versions are known, and variously ascribed to Rev. John White, John Winthrop or Rev. Francis Higginson. While the true originator may never be known, suffice it to say that this copy was written in the hand of Forth Winthrop, son and sometime secretary of the future Governor, and has marginal notes by the elder Winthrop, dated 1629. It was evidently a widely distributed and influential piece of propaganda in furtherance of the proposed settlement of Massachusetts Bay, judging from the number of copies in various forms which are still extant, along with numerous responses pro and con penned by various interested worthies of the day. The Rev. John White probably conceived the initial nine arguments, but we suspect, due to the legal style of its arguments, that Winthrop has here substantially amplified it to its present form with the addition of the objections and answers. In any event, it is surely an expression of Winthrop's own views on the subject, and is of great significance in revealing the motivation of the colonists.

Now, we picked this objection since we have looked at the topic, example: The First Year. We quote Anne Bradstreet's reaction to the new environment. Now, why mention this? As people went west, or to any of the newer areas, it was the same thing (like Yogi said, deja vu, all over again).

Too, though, this type of material allows to discern some of the thinking of the time, especially since there is more of a meditative tone than the modern mind might like. Yet, are we missing something?