People have been interested in genealogy for a long time, to wit, the Bible (from 2013, Endless genealogies, quoting Timothy). But one bogs down quickly with more than the mere brick wall. What were these people up to? What were their times like?

Having just gone through Dr. Frank's Massachusetts Magazine (2018, all issues) from cover to cover, I have acquired a little more understanding of one-hundred years ago, more or less. The last post (on Jedediah Smith - true mountain, and desert, man) looked at activities regarding western expansion which was post the jaunt of Lewis & Clark. Also, that post brought up the notion of a larger focus, namely: culture, history, technology (which includes genetics/genealogy). We will be discussing this, however a quote from an Oxford book of 1850, gives the proper view.

A review of posts in this blog will show many devoted to issues of Whence (2014) and What we know (2012 - definitely needs to be updated). Since the start, we have had several of these types of posts on a subject that will still need some attention. One approach will be to gather what has been found so far so as to evaluate the information and sources. Nothing new there. It is work, but fun. There is a lot of material on the web regarding Thomas and Margaret and variations thereof. For instance, did Thomas have a sister named Rachel? In that case, I looked at this and tried to establish sources (2015, Rachel (Nobel) Gardner).

One post looked at the period around the arrival, briefly (2013, Plus or minus the arrival - I call this the cigarette posts as the time view of the reigns look like ascending smoke). That image shows the long reign of Elizabeth I. Her time overlapped the life of Thomas' father and his birth. Recently, I have started to dig deeper. Frankly, I was motivated by seeing an article on Elizabeth and the Spanish armada incident. In other publications, I read of the various players and places. But, I also noticed Dorset (2015, Sherborne) which is where son John said that they had come from. That lead to a bunch of reading, especially to get familiar with the counties involved, Dorset and the surrounding, such as Somerset, Devon, Wiltshire, and Hampshire.

But, too, I got a better appreciation for the geography of the War of Roses (2013, Origins - Motivations). I do not like how Game of Thrones has warped  the story (only read 2 1/2 books - put it down, never watched any of the Hollywood renditions). But, then, I learned today that Shakespeare is considered a propagandists for the Tudors by historians. Nothing new, as the saying goes.

Before ending, that is Alfred the Great's territory. Of course, the Romans were there, earlier. There was a Sherborne Castle built in the time of William the Conqueror. I think Edward II had some type of confab there. It decayed and was destroyed during the Civil War. Oh yes, the next county has Stonehenge.

Let's stop with a photo out of Dorset.

We expect to move this blog to be under TGSoc.org. Once we get the new blog set up, volunteers who want to help to move things over would be gladly acknowledged.

07/17/2018 -- As we look at things related to western expansion, we need to remember the ones who were here prior to that event. 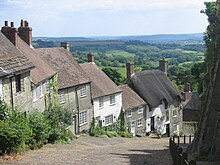 01/18/2022 -- We are now seeing Weymouth in the limelight. Gloucester has is deal next year. And, as always, we need to be looking further into the Dorchester Company, without limit. In another forum, we saw Sir Ridley Scott mentioned. He filmed in Dorset (see image) a time or two.
Posted by AJSwtlk at 5:02 PM