This post is a comment about a recurring subject about which there is not as much known as one might hope, after so many years. However, there is interest in getting the necessary work accomplished to fill in (some of) the blanks.

Recently, there have been queries about Thomas and his pedigree. Each of these generated a little discussion. In one case, the discovery of the remains of Richard III (see Remarks 04/03/2015) helped bring one of these (a Tudor connection) to the light of rational explanation and some type of closure. There are several others.

We intend to gather all of the views, considered so far, and their related material. Why? Just as this Wiki page demonstrates, it can help to have the discussions very visible for current and future use (if you can ignore the derisive tone of many comment'ors, especially of experts who, many times, seem to lose their patience).

So, that type of thing will be a continuing bit of work. However, let's look at one example since it has interest from several viewpoints. For one, it is the work of another family, so we need to see what is what here. Too, it brings to fore the work that is needed. So, this is what we discuss below.

Earlier, we mentioned that several proposals have been made about Thomas' sister, Rachel (2nd bullet). The image shows her and her pedigree (which, of course, if there were a relationship would implicate Thomas). I have marked the image which shows a gap. The problem generally is that many will close gaps without proper support for their argument (age-old problem). 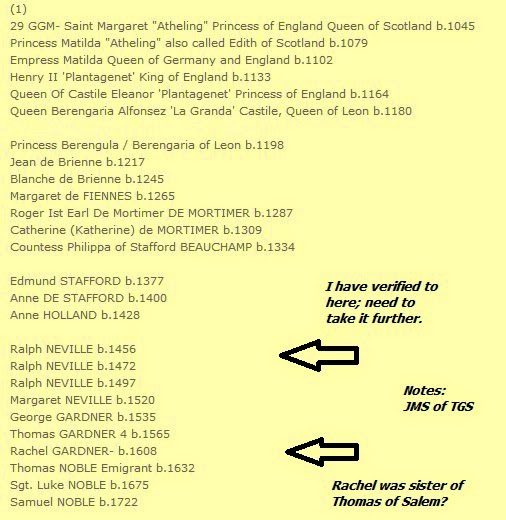 Now, having said that, just like we let experts make grand claims about life thousands of years ago, based upon current observations (as in fossils, etc.) and what is known (as in, very large extrapolation, folks), so, too, can (ought) families be allowed to explore their ancestral space (all sorts of metaphysical notions can come into play) in a rational fashion and do it safely. It is a meme issue (and, one goal is to explore this issue more deeply).

Again, having said that, some fortunate (?) ones have (or can show) lines that do have documentation. This is nice as we can, at least, look, homologically, and find parallels. That means a couple of things. For anyone, relating to past events for your ancestors by looking at someone's experience (vicariously) is a human right.

Now, for the genealogists, there is only this comment. Life is not documentation (notwithstanding the idiots of the cloud attempting to record/store everything - oh, they even record themselves recording?). In fact, we can look at Thomas, given the blank slate, from a more full phenomenological sense than those who left trappings from either their writings or their doings. Trappings? Yes. Doings? Consider John Endicott thinking of Mary Dyer as he went before St. Peter. Writings? A whole other realm to ponder.

Additionally, though, genealogical experts, what was does not need documentation in order to make it right.

Now, that statement ought not be misconstrued as condoning fictional presentations (that are labeled as fact, as fiction is a proper human endeavor - we see historical fiction everywhere being written). What it means is that the posturing, and such, of the experts has very little to do with the being-ness (then and now) of the ancestors. Have a little humility, gals and guys. Even if you bring in science, be a little philosophical about it.

So, back to the image; there are several open generations that need attention. I recently read a 1921 paper (NEHGR, v79, p 358 - pointer to americanancestors.org) by G. Andrews Moriarty titled The Royal Descent of a New England Settler. He is talking about William Sargent of Malden. But, there are many other examples that could be used. The paper gives one a very good idea of the depth of attention that is required.

Too, if this paper were rewritten today, it would be different. William Sargent is not on a lot of lists (of which there are many).

Now, that, then, brings up the end of this. There have been many books and authors dealing with this subject. Frankly, I like to query those that are on-line. I am only going to use one book, for now.

Thankfully, Richardson's books are available. At least, in the preview mode, on Google, one can see a summary of results, even if the page cannot be seen. So, here is one of Richardson's books (there is a search box - Neville, a whole lot to look at). Now, let's use Wikipedia. This page points to the Ralph Neville born in 1456 (you can trace back his pedigree, if you like, just follow both parents at each node - yeah, Wikipedia, from the world's oldest wiki'an). He did have a son, Ralph. But, the information on Wiki stops there (see image, and the upper arrow - there are five generations to prove). Has some researcher filled in the information? Notice the references, on which list you will find Richardson.

Aside: There are people who go missing from family trees. I have several examples to show for this. But, getting them back into the tree requires making a strong case (lots to discuss there). On the other hand, lots of unfounded insertions have been claimed, as in children not known to have been of a couple's issue. Then, some of these are out of whack as biological facts are not considered; miraculous births are not expected to be accepted in genealogy (but, see the above comments on rational explanations).

In short, there is work to do. What is not well-founded are any notions that the questions raised so far have been properly resolved. The important thing, though, is not all questions have been asked.

The adage: When does a mathematician give up on trying to prove a theorem? Unless it is something pretty trivial, never, as long as there is reasonable interest, of course.

Henry Manners is not mentioned in Richardson's book which implies that no one over here has claimed he and his wife, yet. One complaint that I have seen is that a lot of effort has gone into proving lines that relate to people of interest (not my description), such as the rich and famous. But, even if that were not true, there would be many lines still unexplored after all of this time. In just five years, over here, I have found plenty of ignored people and, in fact, just completed a paper on one of these.

There is an adage. Would you rather be of the set of those who are still looking or of those who made early claims that were later shown to be problematic (no need, really, to provide examples)?

04/03/2015 -- Recently, the remains of Richard III were laid to rest. Ever since they were found, there has been a lot of research done (some a renewal, some new). At the burial were some descendants of his sister (see Vita Brevis). Of course, that brought up the hypothesis of William Gardner being the one who did the fatal stroke. That was addressed in the Historical Genealogy post (and other posts). There have been many hypotheses offered, such as the one covered in post. We will take those (all of them) and bring in the facts and known state of research.

About William, see this discussion (on the Richard III Talk page) and this note on the deletion of the William Gardner page on Wiki.

The context to find, enumerate, analyze, report, and keep the information sound is Gardner Research (asking questions). The framework for publishing results that are well-founded will be The Gardner Annals and a FAQ.

09/25/2018 -- Recently the Profile for Thomas Gardner on WikiTree changed to only have the two wives. This was due to research and discussion to which Gardner Research contributed. Earlier, there was a post that summarized the issue and accomplishment: Margaret, anew. Thanks are extended to all who made this update possible. The Profile is managed by the Puritan Great Migration Project sponsored by the NEHGS, publisher of the Great Migration books. So, Sherborne, as John said (see this page for images of documents).
Posted by AJSwtlk at 6:39 AM