Cape Ann, 1623, has always been a theme in this blog. We have many posts about those early times and about Thomas Gardner and Margaret Fryer. However, Dr. Frank, and Ann, are descendants of several families who were at Cape Ann during that time. We would want to look at those further, including Roger Conant. As well, we want to see a fuller picture. 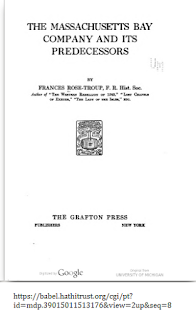 Guess who tried one, over 90 years ago? Frances Rose-Troup in her book, The Massachusetts Bay Company and Its Predecessors.


We referenced her several times here. Also, the web site related to the Dorchester Company referred to, and quoted, her work.

Notice, this book was published here, in New York. She did her work in England. Notice, too, that it is on-line by the way of Hathi  Trust (thank them). This gives us a chance to use Frances as a starting point for work that will continue as long as there are unanswered questions.

With this post, we'll just point back to some earlier work to start to set the stage. We will have several of these which will be in a Category of 'Cape Ann.' Looking forward to this bit of study.

Now, Frances wrote of Rev. John White. He was thought to be an uncle, at one time. That is not the case; however, the web is full of these references. Well, we intend to use Gardner's Gate, framed upon our portal (to Truth) as the clearing house for 'All things Gardner' and for Thomas (of Salem) information, in particular. Part of that will be collecting information about known sites, like this one on The Dorchester Company.

As an aside, we already have taken the FAQ approach. It might need some updating, but nothing there is really out of date (perhaps, incomplete, in some cases). And, we need to have this cover a whole lot more material.

We have taken several looks at Cape Ann: Cape Ann, 1623 and Cape Ann, Retrospective. Too, there are several Gardner themes to study further. Example: Two Thomas Gardner in Salem.

Finally, research is a team affair. So, anyone who has an interest? Pipe up (using the old saying).

03/01/2020 -- Added link to Google Docs version. Working on collecting information about the families at Cape Ann.