HSBG is Howard Street Burial Ground. Last time, we mentioned several facts about the cemetery. It needs attention, for one thing. But, one set of great-grands for Dr. Frank are buried there. And, on a review of  names in FindAGrave (FAGR), one sees lots of New England represented (go here - HSBG and click on the '1,060 Added' button - it'll give you a list of names to scroll). 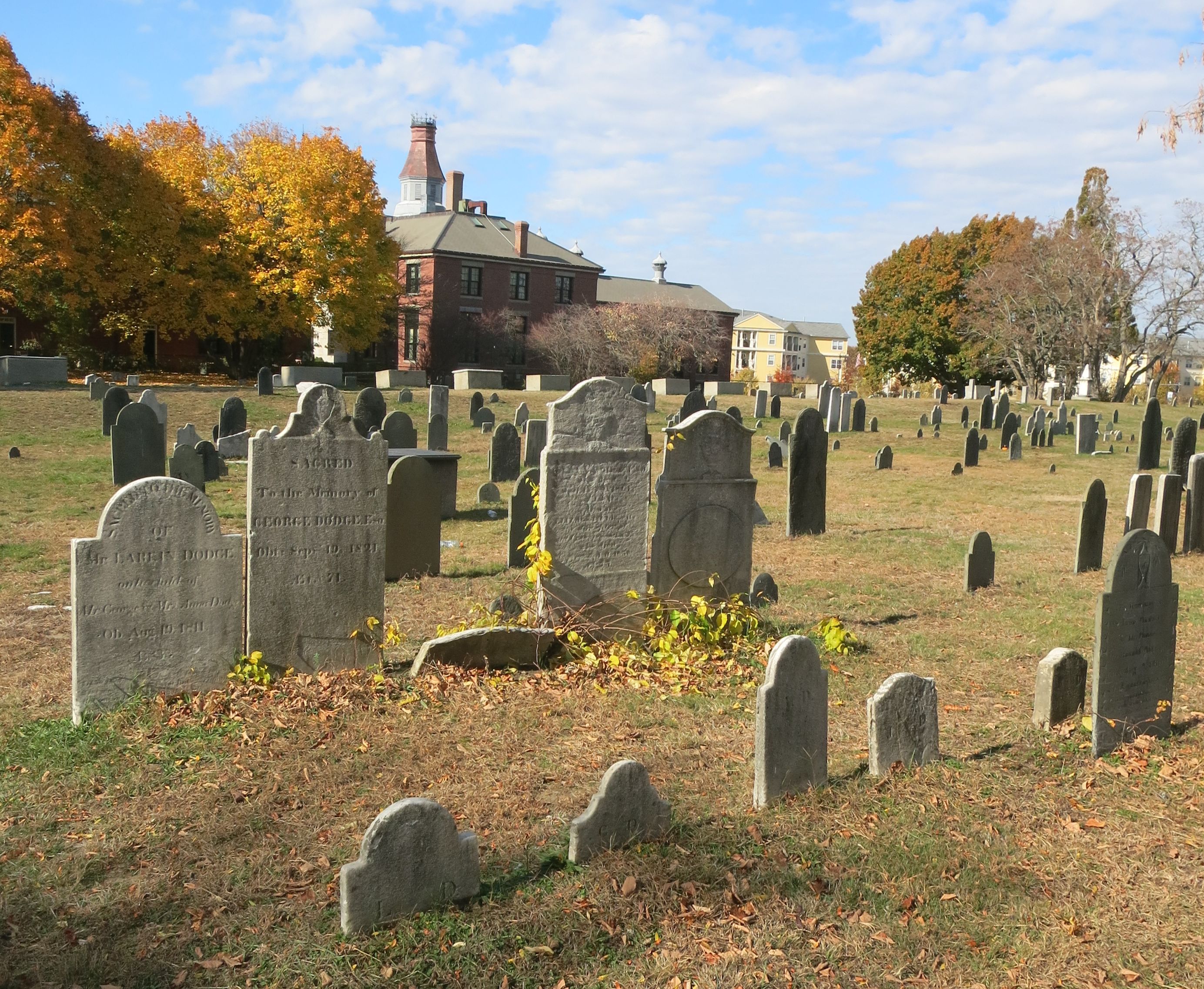 Dodge came to mind.  They have a nice little area (see photo). There are 17 burials with this name. Anna Herrick Dodge, Elizabeth Crowinshield Dodge, and Joshua Dodge.  I picked these due to their early births (prior to the revolution). For Elizabeth, one finds lots of information: Papers of Thomas Jefferson, ...

So, backing up a minute. I have had lots of interchange with FAG (Gardner) and its FAGR contributors. Some respond quickly to change requests. I was happy to hear that DAR supports the effort as it motivates. One cannot trust lots of the material; however, for photos of gravestones, we can tell a lot. These are not just arbitrarily put into place. Last year, I complained due to a family being ignored: Problems with Find A Grave. I persisted; now, the family records have been gathered together (Elizabeth A. Blake Lunt's FAGR has all of her siblings identified). But, find a grave is not sufficient; we need more information. In the FAGR that I do, I link to WikiTree when possible. Example: Caroline A. Blake Ingalls' FAGR points to her WikiTree Profile where there is information about her husband and her children. But, blog posts can work, too. We will get that started, perhaps the 'Tombstone Tuesday' would be a theme.

After looking at the totality of the FAGR collection for HSBG, we can see that members of one family are in different cemeteries. As well, while building our WikiTree presence, we ought to track down burial places. Example: Elizabeth Gardner Gardner, wife of Capt Jonathan Gardner. We did not put a FAGR link (Charter Street, Old Burying Point) in the WikiTree Profile. Their son, Jonathan, is in the same location on Charter Street. However, they had several children. Daughter Sarah Gardner Bowditch is buried there, too. Their daughter, Martha Gardner Barton, is buried at the Broad Street Cemetery. That is mentioning only three of their children. Their granddaughter, via son John, was buried in Harmony Grove with her husband, Jacob Crowninshield. That is a minor survey showing several cemeteries in Salem. Then, we would have Essex County.

One constant is that these FAGRs do not have links to parents and children. We can address that once we get these things written up. So, before going on, let's look at the cemeteries that might be of interest. These are somewhat in order by time. The number is of records added which means the amount of work by those taking photos and building the records. There is a percent given which reports those with gravestones. What we don't know is the percentage of graves reported, however that number ought to be above 95%.
Remarks: Modified: 02/26/2020