We have another Elizabeth (probably, several more) to look at. We just did a post on Elizabeth Gardner (1-#197, 2-# -58 - married Blanchard). Also, we had an earlier reference to Elizabeth Gardner (2-#147 - married Amory) who is noted by Dr. Frank as being the originator of the 1st Governor argument. We had intended to follow up on all of the descendants that we have encountered during the past decade's research. Of late, given the Clapp story (and there is reference to this family in the 1933 book) story in the recent NEHGS publication, we wanted to get back to our original focus on collateral families which brings the mothers into focus. Also, we can see a more full picture of how all of these people relate to each other.

Speaking of Dr. Frank's book, we are using the copy found at Hathi Trust. That is, that will be the source for the numbers. We did a comparison between the 1907 and 1933 (overview) editions one night. Doing this review brings out how the 1907 book is mostly about the Samuel line that Dr. Frank was more familiar with (he had done the research). 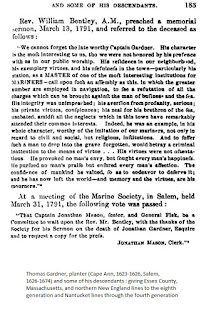 Note: As we go forward, we will need to update the table to show changes between 1907 and 1933. As well, when this was done, I was a newbie with both books at a desk and just typed in numbers as I saw them. In columns. I see, now, that the numbers changed per book for persons in each. BTW, after ten years of research running down many paths, it's time to consolidate all of this. Of course, The Gardner Annals is our planned vehicle for delivery of the material.

It was her son, Jonathan (1-#105), who was eulogized by Dr. Bentley. Her son, Jonathan, and his wife, Sarah Putnam, are buried in the Charter Street Cemetery, in the Gardner annex that we will be looking at further.

Note: We are attaching a 'Research' tag to this post which will be used to flag additional work.

12/26/2019 -- We have started a WikiTree for Jonathan (Gardner-14318). We will continue with Elizabeth's Profile as we get material together. These threads a great for working out these types of  relationships which can be involved.

10/16/2020 -- Her great-grandson, Richard Crowninshield Derby (Descendants of Samuel, How to handle the frontiers), was killed at the Battle of Antietam, MD.
Posted by AJSwtlk at 4:59 PM

Email ThisBlogThis!Share to TwitterShare to FacebookShare to Pinterest
Labels: Research