Houses of Salem? There are many. Some have put these into periods. We'll start with what's called 'Period One' and venture around a little. We'll be at this, for a while, so stay tuned.

What precipitated this little journey was an article posted on the Stanford University site. It was titled: The Salem Houses of William "Old Billy" Gray. The author was a descendant who missed a chance to see one of the houses of his ancestors while he was in the area as a student back in the '60s.

And, the principal focus of the article was the area of Essex Street in Salem, near where the PEM is now. Having been following Sidney Perley's work the past couple of years, we have to compare notes with the information that the Stanford author used. Sidney roamed the archives, walked about the area, drew up maps, and left very good records for us to study.

But, first, how did we get to Old Billy? Well, looking a Loyalists was the key. After we looked at Abigail Gardiner, we went looking for other Gardner Loyalists. Abigail had been painted by Copley. Well, we found a good example of Loyalists: Henry and Weld Gardner. Old Billy had dealt with this family. The Grays were in several of the  towns in the area (William Gray of Salem and Samuel Gray of Medford) and were of note (Our First Men). Billy was quite successful as a ship owner and lost business due to the Revolution (see Gardner-Pingree house as an example - this was the following conflict - War of 1812).

The Old Billy article had a map from 1780. Sidney drew one up from records for the time period of 1700. We provide a snap of those maps below. The great thing about Sidney's look is that he tells us what the records say about each of the lots. 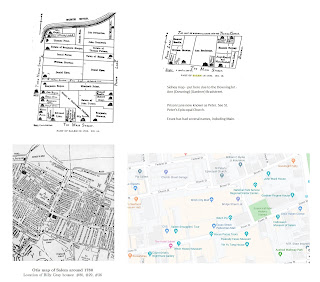 Now, this look is cursory as we will be digging deeper. Just as we mentioned that the Gray family was spread around, so too was Downing. Turns out that Emmanuel sold land to John Porter. It's in Danvers and known as the Porter-Bradstreet homestead. This Bradstreet is of a later time (Revolution), so this all pulls together.

John Porter is an ancestor of Dr. Frank. John had two daughters marry sons of William Hathorne. A granddaughter of William married a grandson of Thomas and Margaret. Sarah (Porter) Gardner and her husband were buried near Thomas in the Gardner Burial plot. Harmony Grove has their stone, but it's unclear what happened to the bodies. That was work being done late last year and earlier this year.

As said, we'll dive into this more. This area of little Essex County is just full of stories waiting to be told. Such as? A lonely grave in the west having a remains of a descendant of John and William (as in, Porter and Hathorne, respectively). That is, a cousin of Dr. Frank (and Ann). Too, though, he's a descendant of Alden and has a granddaughter who married someone from the Brewster line (one of his daughters is already in the database of members of MF).

However, seems that those (or some types of) western-moving people get dissed. I'm sorry, but we are facing a situation that needs attention (yes you, Mayflower people and NEHGS). As if, someone has to pay $1000 or so for a genealogist. We did this work (and a whole bunch more) pro-bono.

Let's get intellectual, too: Genealogy and Bayes. This is one of many examples.

As said, everywhere we look, there is something to dive into. So, we have no lack of work to do.