We were browsing through the tens years of posts and saw this one: Backbone and more (from Dec. of 2011). We referred to this elsewhere at the time and later. We'll recover that thinking. Later, here is another of the same theme: Written out of history (from Aug. of 2012). That latter one was in response to reading material where Thomas was not mentioned.

Actually, there is a post on this, we have to be thankful to Rev. Hubbard for talking to and including Thomas in his review of early Massachusetts. He wrote in the 1680s. The manuscript didn't the light of day until the mid-part of the 1800s. Hence, the motive, in part.

Lots of these types of themes have recurred over the past ten years. Lots of the posts were about things discovered or uncovered. And, as we mention in the coming issue of Gardner's Beacon, we'll be relooking this year. After all, when does a decade end/begin? We really do not have a zeroth year. Or, did not prior to abstraction-philes of mathematics brought it to bear.

The image is of the titles of posts for the first three years. We'll do the subsequent years, shortly. 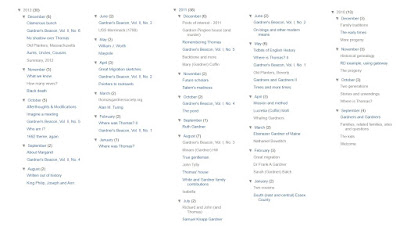 Note: The order is descending (2012,11,10), with year then months and posts within months. So, it's like a push-down stack. One reason for doing this is that the order is chronological from now backward. That is nice from the perspective of considering progression.


The light colored lines are those read of late. One thing is that July 2012 is missing. Need to see what was going on during that month that kept TGS work to a minimum. We will report on this.

We will also update this chart: The metrical. How do we all like the modern way, the means of which is due to computation, of putting an endless supply of numbers on ourselves?

Oh yes, there is a Backbone category (needs to be updated). Backbone? Where the rubber meets the road. In other words, reality versus the brain-laden misdirection that has been so much of an issue over the eons.

Here, two methods are used, the page (for structure) and category (accumulation of a sort). There are more which we want to explore, describe, and demonstrate. Thomas and Margaret, and the American Dream, are the motive; life and times are the focus for ways and means.