This post goes along with our efforts at organizing all of the material that has been collected. For one thing, we expect to have the bibliography documented more extensively than what we have done so far. For many topics, we want to have an annals unfolding of the discussion. Gardner's Beacon, Vol. II, No. 6 - Issue, Post, is an example.

Today, I got to reading Hutchinson's work (Vol. I, Vol. II) that he finished after going back to England (as a Loyalist). He, of course, had Hubbard's manuscript which we almost lost due to fire (and riot). That would have been a real disaster for the Gardner viewpoint, as Rev. William Hubbard was the first to write (we will check this - was Cpt. Johnson, first?); and he had talked to all of the principals (Rev. William's work was published in the early 1800s over 160 years after he did his work). And, we can see how extensively Rev. William talks about the early years (as in, pre-1620 - see Gardner's Beacon, Vol. III, No. 1 - Issue, Post).

Let's look at one little item.

If one asks the question (Who was the first Governor of Massachusetts?), the most general answer will be John Winthrop who came over in 1630. Others, who might be more considerate of specifics, will answer John Endecott since he had a Royal charter in 1629. For more information, look at Wikipedia which has a nice list of colonial governors of Massachusetts.

Now, considering Plymouth, one can add John Carver at the top. However, what about George Popham? The Popham effort was successful in many ways and was thirteen years prior to the advent of the Mayflower Compact.

Then, we get to Ferdinando Gorges who supported Popham. He, and his son, Robert, were involved with several attempts.

We must not hold that they moved locations against them. That was the reality in Virginia, too. And, the Cape Ann crew moved.

Now, speaking of which, some might say, Roger Conant. This is mentioned in the family book (note that this link goes to their discussion of what we called Margaret's house - Gardner's Beacon, Vol. II, No. 4 - Issue, Post - Note: there is no mention of Thomas Gardner). Rev. William talked about Roger's lament of being ignored (-- future post -- this quote plus the late 1800s meeting that included the noted descendants, such as William Crowinshield Endicott, Jr, Henry Cabot Lodge, and others). 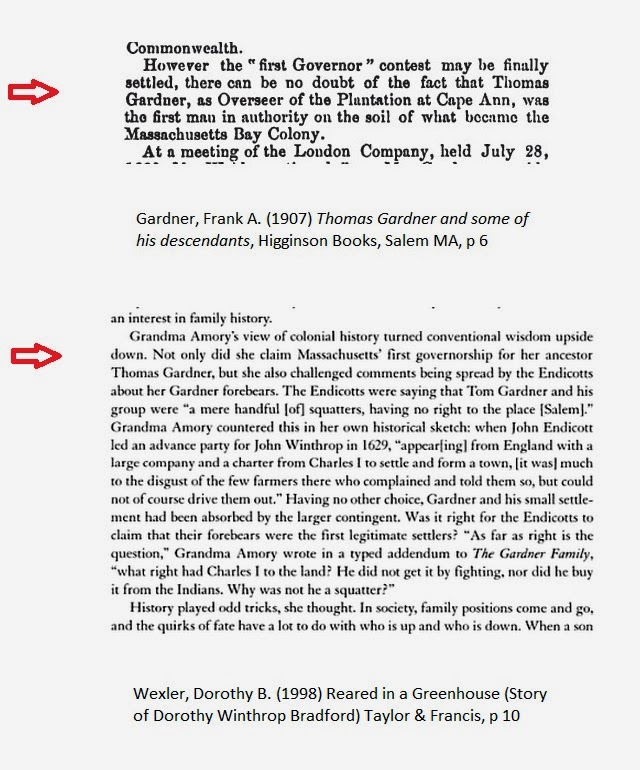 Now, in his book, Dr. Frank touches upon this, very briefly. But, in a section of Vol. II, No. 6, there is a look at the original source: Elizabeth Gardner Amory. Elizabeth's granddaughter, Dorothy Winthrop Bradford, writes about discussions with her. The image is from the book, Reared in a Greenhouse (preview mode at Google books) by Dorothy B. Wexler.

The time frame to which Elizabeth refers would be (say) post-US-Civil War. Elizabeth claims to have been the first to make this statement about the first governor. Her discussion about the matter is on page 10 (see image).

This little example is one of many. The recent book about how "invisibles" hold the world together offers a few modern concepts that can be useful as we proceed with further analysis (more later - but, there is no shadow nor is there any lament).

07/22/2014 - Captain Edward Johnson published, in London, in 1654. His book was redone, in Andover, MA, in 1867 (this is in the collection for the bibliography). ... How could I not mention Higginson whose comment about Endecott's house lives on?


07/23/2014 - Read a little more of the book. Interesting. Added Elizabeth to the descendants list (Wikipedia, which has a page for the Dudley-Winthrop family). This list will be getting more attention; the last exercise got rid of stale and suspect links. We will reorganize (with the intent to foster analysis and discussion) and add more descendants (we need more of Miriam's progeny, for example).