The context has been discussed for awhile (CMS, again, Website and CMS, ...). Until a few days ago, I was mostly in research mode (quite an involved study). For one, the whole computational framework is accelerating all of the time, almost to being out of control.

To wit, if you must ask, someone using the following metaphor brings out one big issue: A generation lost in the bazaar. If one looks at the framework, it is a horrible affair with most interest following the money. What other attempts are there that look at requirements, the more universal aspects, and such. Following the buzz, the apps count, for instance, is way over 1M.

Who can grasp that? And, we're not bringing into the discussion (as of yet) things like malfeasance, mis/dis-information, and the like.

Part of the study was getting a grip on all of the alternatives. There is a whole lot of stuff available. Many want more money than their stuff is worth. Some of the free stuff is phenomenal (see below). One can buy into someone's worldview (golden handcuffs, so to speak). One can piecemeal things.

And, the cloud? We are using some of that, yet the details related to things computational ought not be hidden too much. That leaves the wizards without oversight.

So, what the TGS, Inc. (we need an acronym) site uses now, one might characterize as about 1999. That is pre-2000 when all of the resources were going into handling the massive number of failures that were to occur (and did not, except to trivial amounts). After that, money was loosened, so the web stuff took off. Rushed forward (remember the tech crash?).

The next decade saw some interesting changes (remember FB was still small in 2008). So, there are a couple of pages at the beta site that get us up to, say, 2012.

I had some free time and decided to see how far I could get with just HTML/CSS. The example at Gardner's Beacon(TM)'s page illustrates this a little. Of course, at some point, one has to get to code (which is everyone's right). Now, dealing with such details can be extremely tedious (downright awful, sometimes), yet real advances will have the machine do the hard stuff in a way that is verifiable (singularity thoughts, notwithstanding).

We're still alpha, as there are a lot of things that need to be considered. At some point, the site will be reconfigured using one of the newer methods. But, that will not be the end. These things will continue to (ought to) be of interest forever (there is too much at stake to pull the ostrich's move).

Of course, in all of this, there is a major theme. What would Thomas think? Such as, how about FB's stumbling around and experimenting in questionable ways (because they could, and no one seems to grasp the issues any more)?

07/16/2014 - We pushed a lot of changes up today (not all pages are done, but the site is functional). Created a new page, devlog, that will talk "turkey" as in how a more complete view is required for truth engineering. Meanwhile, more improvements being researched. As an aside, D.A.R. recently changed their site's look (modernization that emphasizes the cover - one might say, PR view). But, when one goes to the functional aspects, things are still the same (as in, this page). Just as the cloud requires servers (services), there needs to be the intermediate frameworks that are not supported by tablet, or smaller, technologies (yet, ..., but can those devices ever be sufficient?). 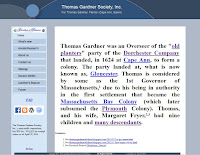 07/19/2014 - Mostly done with the reconfiguration. Now will be updating content.

10/10/2018 -- In 2016, we started a new site: TGSoc.org. It is a minimal HTML/CSS start with additions of Javascript in the plans in order to be a portal. Our traditional site will handle publications and details related to our research. Our theme is culture, history and technology. Too, issues of content versus configuration will be on the table.
Posted by AJSwtlk at 5:33 PM

Email ThisBlogThis!Share to TwitterShare to FacebookShare to Pinterest
Labels: Context