Now that we see that two of Dr. Frank's great-grandparents are buried in this cemetery, we will have to feature the place. After all, this is where Giles Corey was pressed to death. John Gardner (son of Thomas) was there.

Named for a seaman: Howard Street had a varied history. It opened, officially, in 1801, but there had been burials there before. One of these, unmarked, was that of Corey who we mentioned a couple of years ago in the context of writing about 1692. After all, Salem was Thomas' territory.

We were there but didn't pay adequate attention; we'll be back. One blogger mentioned the lack of respect. We'll have to address that. Another mentioned that it contains lots of veterans of the Revolutionary War. Elsewhere, we saw reference to many seaman being buried there. Stephen Wilson, son of Jonathan and Prudence, died at sea and is buried there.

Speaking of seamen, Captain Lawrence and his mate Ludlow were interned in this cemetery for a while in the Crowninshield tomb. Benjamin Ropes was there for awhile. He was moved to Harmony Grove Cemetery.

We all know about the Gardner Burial Plot. So, Howard Street looks like an interesting case. At least, we can visit the place.

The list of families is quite interesting: Hawthorne, Manning (Nathaniel Hawthorne's mother, Elizabeth Clarke Manning), Crowninshield, and a whole lot of other old New England (Essex County, MA) names. We will look at those. There are many Peabodys buried there. 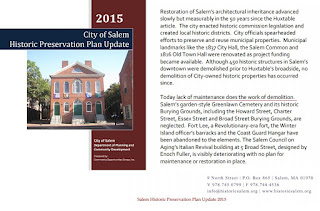